Long-time students and friends of the former Rev. Genki Takabayashi, one of the first teachers to bring dharma to the Seattle area, gathered in April to commemorate the traditional 49 days after his death.

Takabayashi died Feb. 24 at his home in Victor, Mont., with his wife Leslie Gannon at his side. He was 80.

Takabayashi’s students remember him as someone who was relentless in his pursuit of the dharma, always bringing great energy and enthusiasm to everything he did. He wasn’t perfect, nor did he claim to be, but he taught students how to make every moment a learning, and how to never give up despite inner and outer conditions. 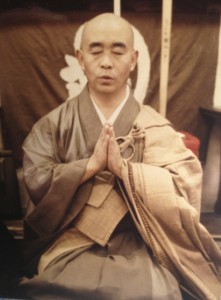 The memorial service attracted 60 people from six states, including Takabayashi’s wife and three priests whom Genki ordained.  The day began with 5 a.m. meditation, followed by a service at 10:30 a.m. and lunch at noon.

Remarks and reminisces about Takabayashi’s life were offered by Marinello, the other two ordained priests Genko and Genchoku, and others who knew Takabayashi intimately. Here’s what Marinello said:

“My teacher  Rev. Genki Takabayashi was born in Gifu Prefecture in Japan, and was given up for adoption at age 11 to a Rinzai Zen priest, Genpo Takabayashi, abbot of Seitai-Ji.  His adoptive father eventually ordained Genki.

As a young adult Genki left for Daitoku-Ji, one of the two primary Rinzai training temples in Kyoto, Japan.  For a time he became abbot of a temple in Kamakura, Japan.

After 20 years of Zen training, Genki was a rising star within the Daitoku-Ji ranks. However, because of troubles arising from his own poor behavior he lost favor with the hierarchy, and no longer had much of a future within Japanese Rinzai Zen.  Therefore, he was amenable to overtures from Dr. Glenn Webb, then an art history professor at the University of Washington and head of the Seattle Zen Center (the progenitor of Chobo-Ji), to consider immigrating to Seattle to become our temple priest. 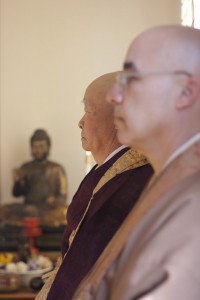 Ven. Genki Takabayashi with Genjo Marinello, who was a primary student and who succeeded him as abbot of what is now Dai Bai Zan Cho Bo Zen Temple in Seattle.

Genki arrived in Seattle in the autumn of 1977, and I was one of a few students to greet him at the airport.  After a long flight he was hungry, so we offered him an airport breakfast of oatmeal. I became fearful he might just take the next flight home.

In fact, Genki wasn’t sure he would stay; he thought he was coming just to check us out.  However, he was delighted to find that Seattle students were sincere, and he found our spirit and commitment strong and refreshing.   Webb was able to assist with getting a green card for Genki to stay in the USA as a “missionary.”  Eventually Genki went on to become a U.S. citizen.

I ended up apprenticing with Genki Roshi (senior priest), as we soon came to call him, for 20 years until his retirement in 1997.  Over the course of my long association with him, I learned three profound lessons.

The first thing Genki showed me about the human condition is that it is possible to transcend our likes and dislikes, preferences and opinions.

During the1980 summer sesshin (weeklong meditation intensive) with him, which was held at Dry Falls State Park outside Coulee City, Wash., the temperatures were in the 90s and the meditation hall was full of mosquitoes and flies.  In addition, Mount St. Helens had a secondary eruption, flooding the air with gritty ash.

To say that our meditation periods were hellish was not an understatement. During this retreat, students would twice daily visit Genki Roshi in the dokusan room, where dharma interviews were conducted. It was a small room with little ventilation, and we all concluded some animal had died and was rotting somewhere under the floorboards.

Despite all this, in the meditation hall and dokusan room Genki sat serenely and unmoving in the full lotus position, with a beneficent countenance, seemingly impervious to adversity. 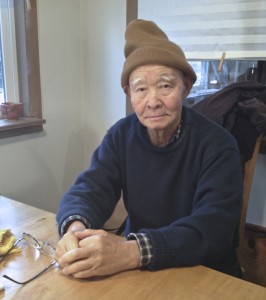 The next year the autumn sesshin was held on the Seattle Zen Center’s newly acquired property at about 5,000 feet, on the crest of a ridge between the small cities of Cle Elum and Ellensburg, Wash.

Snow started falling during the retreat and our newly built meditation hall was still without windows. During one interview period I was waiting in line to visit Genki Roshi, and snow was coming through the vacant window and piling up on the frame of my eyeglasses.  When I opened the flap of the outdoor camping tent that was serving as the dokusan room, I could hear the crackle of ice snapping.

In front of me Genki was once again sitting serenely in full lotus, surrounded by icicles hanging from the walls of the tent.  When I left the next month to train at Ryutaku-Ji, an affiliate monastery in Japan, these images of Genki Roshi sitting untroubled by conditions and circumstances allowed me to face the uncertainty and trials of such a journey with a measure of equanimity, and I am forever grateful.

The second gift I received from Genki Roshi was the opportunity to soak up his actualization that an “enlightened” life is an “ordinary” life.  In everything he approached, he demonstrated that living life fully with “everyday openhearted activity” was paramount.

No matter if it was sitting zazen (seated meditation), cooking, calligraphy, gardening, landscaping, cleaning, pottery, giving teisho (formal dharma talk), making a bowl of whisked green tea or writing fiction, Genki was fully present to the activity at hand, operating with joy, unending enthusiasm and energy.  He taught us that samu (work meditation) was more important to our training than zazen, sutra recitation or koan (Zen parable) study. 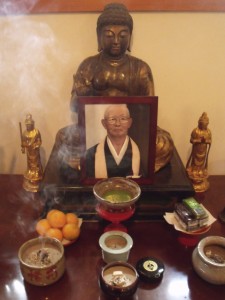 A shrine to Ven. Genki Takabayashi, who died Feb. 24.

The third lesson learned, the hardest to accept and perhaps the most important, is that all of us are fully human!  That is to say, that though Genki amply demonstrated that we can be and are all vessels of the dharma, we are also limited, and from time to time stubbornly primitive.  There will always be tension between our base instincts and true insight.

When Genki left Japan he abandoned a relationship and a child.  He never understood credit or money well, and often found himself in debt.  Early on during his time in Seattle we had to warn female participants that there was a good chance he would make a pass at them.

We are all a blend of Buddha and bumpkin; with all the training in the world we will never arrive.  In other words, from wherever we are we are always just beginning. I often tell the story of how at least once a year Genki would give a teisho where he would exclaim, “I now just beginning to understand, just now beginning to see.”

Everyone has limitations and shortcomings that arise from wounds in our history.  There are three options for dealing with them. One is to do the very difficult work of combusting, digesting and integrating these wounds.  Second is to contain them so that they don’t cause harm to others.  Third is to skip over them with spiritual bypassing, which can be easily done, but usually comes back to haunt us.  Like most of us, Genki made use of all three.

Genki Roshi proved time and again that he could be an inspirational catalyst for those training with him.  He probed and prompted us to investigate and experience the depth of our true nature, a bottomless vastness without form that gives rise to everything.  He taught mainly by example how to live fully and passionately, with an attentive caring attitude, beyond any attachment to rank, position, preference or opinion.  He became a surrogate father to me, and I will be forever grateful for his continued presence in my life.  May the flower of his inspiration continue to bloom for generations to come.”

0
SHARES
Share
Posted Under: 2013, Sangha News, Summer
About the Author: Genjo Marinello
Genjo Marinello began his Zen training in 1975 while at UCLA, moved to Seattle in the summer of 1976, and shortly thereafter joined the then-Seattle Zen Center. Since 1999 he has served the center as abbot. It is now called Dai Bai Zan Cho Bo Zen Temple.
Photos: Dai Bai Zan Cho Bo Zen Temple