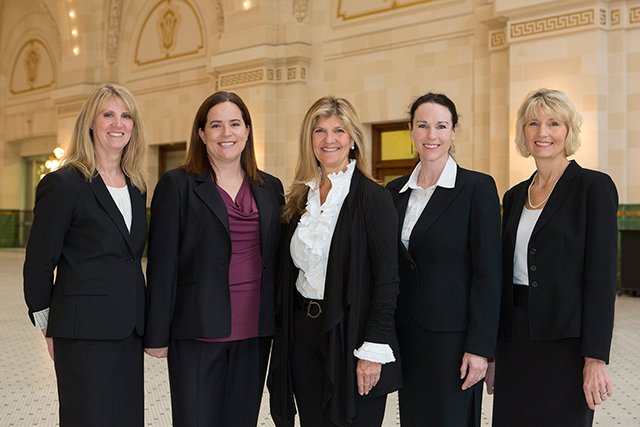 (Editor’s note: Late in 2013, Seattle divorce attorney Carol Bailey, also a long-time dharma student and practitioner, realized she could apply her skills helping people work through disagreements to ease discord in Congress. This is her story.)

In late 2013 I attended an annual gathering of Seattle attorneys where President Barack Obama’s personal attorney Bob Bauer was the guest speaker. I was deeply disturbed to hear him discuss the poisoned personal relationships among Congressional members.

I have always been very patriotic about the best parts of our country and concerned about the well-being and future of America.  The fact that Congress was derailed by negative personal relationships and neglecting, actually harming the citizens, really bothered me. 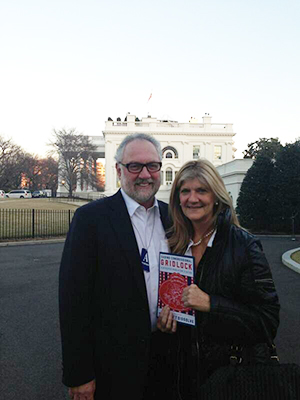 Bailey and her husband Steve Medwell in front of the White House.

As I drove home, it dawned on me that the situation in Congress is really similar to that of families I work with, where the parents are fighting, neglecting and harming their children because they are so focused on their personal animosity.

And I thought about what has become my life work: to help these people work together to find common ground.  This is in many ways rooted in my years of dharma practice, and my contact with great Tibetan Buddhist masters along the way.

I thought, “I know something about this.  I have worked for years with people who literally hate each other and have deeply hurt and betrayed each other, and with direction they are able to put that aside for the sake of their families.  Surely the Congress can do this for the good of the nation.”

I made my mind up that night that I was going to do what I could to be helpful. I decided I would write down what I have seen work for people, and then I would take copies to Washington, D.C., and give one to every member of Congress.  I sat down and wrote my entire guide, which I called “Easing Congressional Gridlock: A Divorce Mediator’s Guide,” in two hours.

I have studied and practiced dharma for many years, and became a student of Lama Tsultrim Allione of Tara Mandala in Colorado in 1983.

Since then I have met and studied with many great Tibetan Buddhist masters, including Dilgo Khyentse Rinpoche, Namkhai Norbu, and Sogyal Rinpoche. I also have received teachings from many other teachers, and read their works.

When I was younger I was a serious practitioner and dragged my children all over the world to retreats.  In that process I noticed that many people studying and practicing dharma (and probably people in other religious organizations) had good intentions, but their behavior did not fall into line with their good aspirations.  There was, let’s say, “lots of drama in the dharma.”

Lama Tsultrim always taught and emphasized the importance of integrating psychotherapeutic insights into the practice of dharma, and this became very central to my thinking.  We 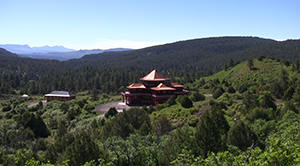 Tara Mandala, in Pagosa Springs, Colo., where Bailey studied the dharma for many years.

had to take the incredible insights of Buddhism and actually use them to practice compassion in our daily lives by working with our own issues.

I learned that once we really understand the fundamental insights of impermanence, the causes of suffering, and the karmic nature of our actions, then compassion for ourselves and for others arises naturally.

As a divorce attorney I have spent years watching people create difficulties in their lives because they lack basic communication skills, and because they misperceive the events of the external world.  My work life has become studying our shared misperceptions, and the tools that can help clarify them.

Through this I also have developed incredible compassion for others because we all, myself included, create so many unnecessary problems for ourselves and so much suffering for others.  So I decided that I would take my many years of experience as a family law attorney and mediator helping people bridge large divides, and offer to the U.S. Congress some of the strategies I have seen work.  It was that simple. 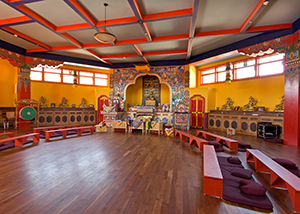 The shrine room at Tara Mandala.

Creating the pamphlet, contacting the media.

I immediately sent what I had written to several people to edit.  I realized this was like a political pamphlet, and so I found a young woman in New York to do the great cartoon, and Effective Design in Seattle to create the graphics.

I then contacted Team Soapbox public relations, also in Seattle, which got some immediate local coverage at KOMO TV, and a few radio interviews.  This formed the foundation for what was to come.

Then we got a huge break.  A friend of mine and Soapbox pitched my pamphlet to Politico.com, a well-known political news website, and we made the front page!  Everyone inside the beltway of D.C. who is interested in politics reads this.

Honestly after the Politico.com piece I felt we had accomplished everything we needed to, except handing out the pamphlet to every member of Congress, which was my main purpose in the project. Because of the local coverage in Seattle and then the Politico.com piece we made it all the way to Yahoo!/ABC news and onto CNN.  All of our media coverage, and our pamphlet, are here at our site, easingcongressionalgridlock.com.

Executing our plan in Washington, D.C.

My husband Steve Medwell and my sister-in-law, Lisa Eads, went with me and provided invaluable support, as we visited the offices of every Congressional member.  I personally 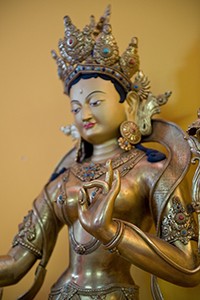 A statue of Tara, the female meditational deity of active compassion.

We did run into one serious problem: blisters.  I had bought some “big girl” heels and thought they would be fine.  They were not.  My feet were so blistered I could not wear any of the shoes I brought, and rather than be a fashion diva I was reduced to buying and wearing mules for the last two days.

We learned that Vice President Joe Biden would be in D.C. and we were invited to meet him!  OMG! At The White House!

When we met, he told us that right now he is more excited about our country than when he was first elected at age 29.  It was so positive and so inspiring, and a perfect ending to this incredible adventure of taking the desire to be helpful, making a commitment to that desire, and allowing the power of the commitment to bring it into reality.

People questioned, sometimes cynically, whether my efforts would make any difference, and at first these comments were discouraging. But what I eventually came to is that you can’t censor yourself out of making a statement.   You can’t decide before you start that your efforts can’t make a difference.

In the end I realized that you have to put your own goodness out in to the world regardless of whether you can be sure you will make a difference.

Do we not smile at others because we are afraid they won’t smile back?  You never know when you give someone your smile what will happen with it.  It might make their day so they can make someone else’s day.

If only one person read my pamphlet of tips and felt the good spirit in which they were offered, that would have been be enough. 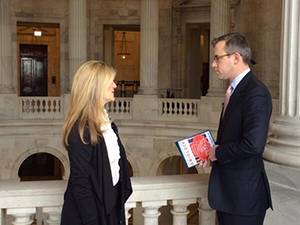 Bailey is interviewed by Jeff Zelney of ABC. (Note the “Easing Congressional Gridlock” pamphlet in his hand.)

But actually, I know a lot of people did read it.  Many of the staffers wanted a copy.  And the pamphlet had a card in the back for everyone’s wallet so they always would know what to do when they got into a difficult conversation.

After I returned to Seattle I had a conversation with one young man I had met in D.C. he said, “I just want you to know I have your card in my wallet and I ‘m using the tips.”

So my biggest learning from this undertaking, which I would never have anticipated, was how pessimistic others have become about making a difference and how important it is not to allow yourself to be trapped and muted by that.  It actually doesn’t matter if you can make a difference and you can never know that in advance anyway.

Those negative thoughts are just another misperception we have about the world, and I encourage everyone to put their good heart, good intentions and helpful ideas out into the world all of the time.

As I am older now and have been studying the Buddhist path for over 30 years, the dharmic way of thinking about ultimate happiness is so integrated into my mind stream that I don’t have to “try” anymore.  It’s just there as the basis for everything I do.

I don’t even consider myself “a Buddhist” anymore.  I just want to be helpful in the world, in the ways I have learned along the way, and to try to the extent we can to avoid being harmful to anyone, another matter of perception.  For me dharma has to become real through our actions in the world, if it is to be truly meaningful.

0
SHARES
Share
Posted Under: 2014, Compassionate Action, Featured On Home Page, Spring
About the Author: Carol Bailey
An attorney, Carol Bailey is a founding partner of Integrative Family Law, a Seattle firm. She also is a long-time Buddhist practitioner, and studied extensively with Tsultrim Allione, and other Tibetan teachers, for many years. She lives in Seattle with her husband, Steve Medwell.