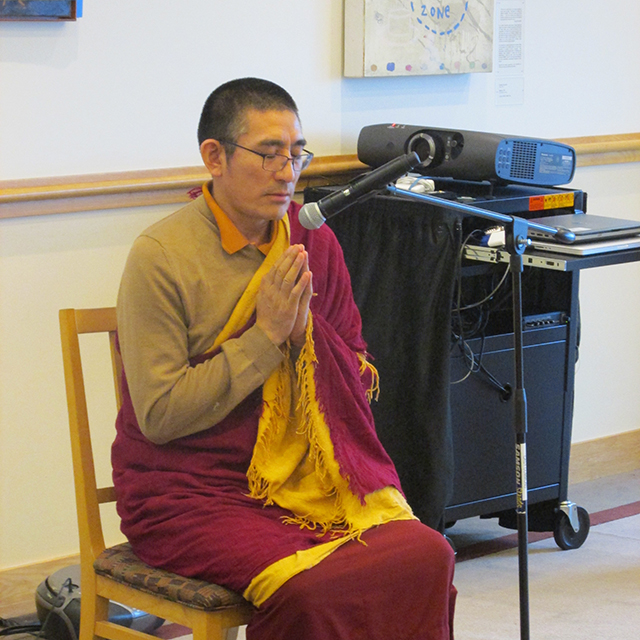 More than 150 people visited the “Arts as Buddhist Practice” festival in Seattle March 8, as an array of the region’s most talented Buddhist artists shared their creativity.

At times the event took on a sacred air, such as when Ven. Tulku Yeshe Gyatso, of Sakya Monastery in Seattle, sang sacred songs of Tibet, alternating with songs offered by Sonam Tshedzom, a young woman.

Tulku Yeshe Gyatso preceded his music with a few words about the plight of Tibetan people under Chinese rule, pointing out that 130 Tibetans so far have self-immolated in protest.

“Here we are lucky to practice our own religion, but in Tibet, we don’t have this kind of opportunity,” he said. “I am representing my people. I cannot be quiet.”

Other times it was funny, such as when Lynne Marvet, from Nalanda West in Seattle, mimed all the ways distractions arise in meditation, to the great amusement of the crowd.

“It was a great personification of mahasanaga, you had Buddhist of all different stripes coming together and they had a good time,” said Tim Tapping, president of Northwest Dharma Association, and a lead organizer of the event. “People were talking about their art, and how it fits into their practice, and that was pretty amazing.”

The Seattle event came just a week after a similar event in Portland, an experiment in coordinating Northwest Dharma Association’s annual gathering in two places, on two Saturdays.

Most of the Seattle activities were on an upper floor of a building at the Seattle University campus, which provided room for continuous lectures and performances in the main room, plus workshops in two other nearby rooms.

Many of the presenters presented the dharma in new and unusual ways.

For instance Anita Feng, a teacher from the Blue Heron Zen Community, who also creates unique sculptures of the Buddha, offered the Diamond Sutra in a way that invited people to look at the emptiness of everything.

During the brief period, people chanted four lines from the Diamond Sutra over and over in English, and then gradually interjected names of things they were attached to, or that were in their lives.

Dance and music also were celebrated, including a Tara Mandala dance of the 21 Praises of Tara, a Taiko drumming workshop from Seattle Betsuin Temple, and Thai dance, from Buddha Vanaram in Auburn.

Marvet also led a group of Nalanda West singers in a rousing series of “Dohas,” songs of realization.

The hands-on workshops included a demonstration of Ikebana by Shelley Pierce of Shambhala Meditation Center in Seattle, a calligraphy demonstration by Tulku Yeshe Gyatso, as well as demonstrations of pottery, origami and Thai paper folding.

“People liked the hands-on stuff. The workshops were a big hit,” Tapping said.

The event was put together by a team of about six people over two months, he said.

“I think it was a great thing, there were some very interesting presentation,” Tapping said. “It was a great day for the larger Buddhist community here in Seattle.”

The event closed at 5 pm with a dedication of merit led by Ecosangha leaders Jason Wirth and Elizabeth Sikes.