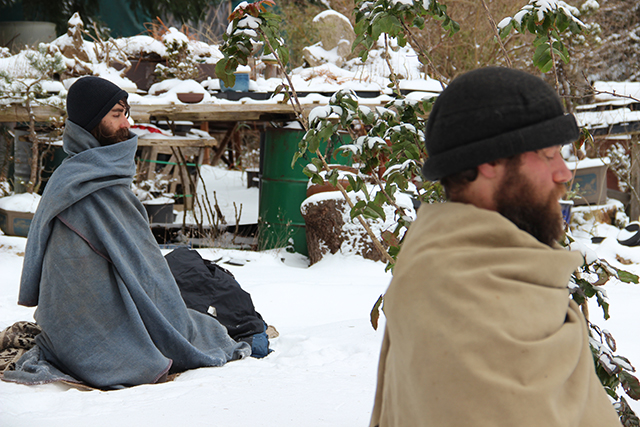 Touching Earth Sangha, an unusual Portland-area spiritual practice group that focuses on reclaiming renunciation as a central aspect of practice, is looking for a home.

It’s a bit ironic that a sangha that particularly honors the intentional homelessness of the Buddha, and his original community, is wanting to settle down. 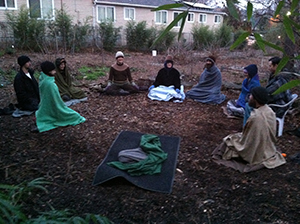 But if you want to host workshops, extended retreats, and a full-time residential practice, (and you want people to come) it helps to have a place.  A bit of land with a yurt or barn would do. They say Master Yaoshan, a famous 9th Century Chinese Zen monk, turned an old cow-shed into his first meditation hall.

The Touching Earth Sangha community started in the first years of the millennium as a weekly meditation gathering in Portland.  We met at the food co-op’s community room for a while, then at various people’s homes and at parks all over town.

The Sunday gathering, with sitting, a talk, and a shared vegan meal, has continued up to the present.  Now being held at Kailash Ecovillage in southeast Portland, it includes qigong and a sound practice based on classical Indian raga.

Along the way we’ve experimented with residential practice. After we received our one and only large monetary donation we actually rented a small house for four months, and crammed it with seven enthusiastic full-time practitioners excited about a strict monastic schedule in the midst of the city.

But with no one making an income, it was short lived. 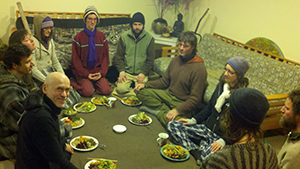 Next we were offered to stay for free in a partially de-constructed home that was far from being rentable – perfect for us!  But apparently some anonymous neighbor was very concerned that we might not be using electricity – she reported us to the city, and it was time to move on.

Ever since, the dream of having a stable place to offer no-cost retreats and residential practice to all, has been percolating in many of our minds.

What makes Touching Earth unique is our focus on radical simplicity as the heart of our spiritual vision – we practice trying to give up any behaviors in our daily lives that cause harm to other beings or to the ecological balance of the earth.

In our current hyper-consumerist culture, this means questioning and reducing many daily habits that most take for granted: car-driving, airplane travel, plastic buying, animal eating.  Instead we turn to the inspiration of the natural world –  the ground from which we come – as our guide for sustainability and harmonious balance. 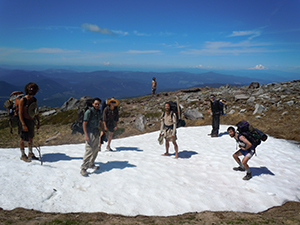 We sit outside whenever it’s not pouring, walk barefoot in the mud during retreats, and go on frequent excursions to Wy’east (Mt. Hood) for meditational backpacking adventures, getting there by bike.

We endeavor to be models of a movement to explore how low-impact our lives can be, and how this simplifying of our lives can bring not deprivation, but an expanding sense of gratitude, vibrancy, and joy.

This practice of renunciation, of course, is not new – it has always been a central component of the spiritual life in traditional Asian Buddhism, as well as in many other religions around the world.  But as Buddhism came to the West in the midst of industrial expansion and growing consumerism, and was embraced mostly by the more privileged in society, a way of life embracing renunciation hasn’t been very popular.

Renunciation’s central place in the tradition, however, remains important to consider. A simple life offers the most nurturing environment to really understand that present awareness is all we need for true fulfillment.  And living a life of least harm to others is the most basic way to express compassion and to actually, practically, begin to help relieve all beings from suffering. 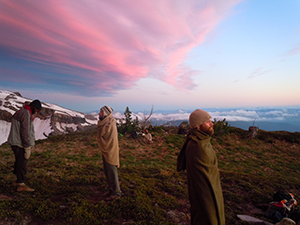 In the present world where unrestrained consumerism is already causing unprecedented and dangerous disruption to the planet’s ecological balance, from climate change to species extinction, nuclear waste to massive ecosystem destruction, learning to live a more simple life (not just token measures, but a deep and lasting transformation) is more crucial than ever. To reintroduce renunciation, and to reframe and update it according to the issues of the  present day, is thus a guiding principle of our sangha.

As the original instigator of Touching Earth, my own background brings many of the seeds of our vision and practice.

Deeply inspired by the joy and aliveness I experienced in childhood wilderness adventures, I began to question the benefit of much of our civilized,  fabricated environment at an early age.  At the same time, I was drawn to the inherent mystery in nature, and to the question of our place in it.

After studying Asian religions in college, and having my first taste of sitting practice, I headed out to the West Coast determined to make practice the center of my life. 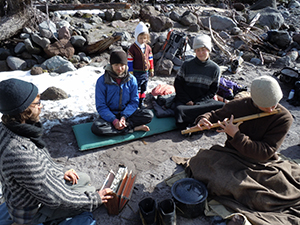 After practicing at various Zen centers and quitting my last job, I grew to want to taste the roots of the tradition, so I headed to Asia and practiced in Japan and Korea, before embarking on a pilgrimage in India.  This included a 30-day trek across the Himalayas into Ladakh, where I encountered a traditional Buddhist culture remarkably sustainable and joyful; one which reinforced my own instincts about how people could live together in nurturing communities, and in harmony with the natural environment.

Eventually I decided to delve into traditional monasticism more deeply, and went to practice at the Bukkokuji Monastery in Japan (with Harada Tangen Roshi), for five years.  At the end of my Asian sojourn, I practiced briefly at monasteries in mainland China, where the model of a renunciate sangha was surprisingly still very strong.

On returning to the U.S. I was determined to continue living as a renunciate, without income or my own home, and hopefully help spread the potential of, and need for, radical simplicity  to Buddhist circles, and eventually to the wider culture.  I became involved in direct-action forest defense which brought me up to the Northwest, and my first experience of leading meditation workshops was at forest activist training camps.

Finding myself becoming part of the Portland community, I became involved in serving free vegetarian meals in public parks with the Food-Not-Bombs movement, and the first few members of Touching Earth Sangha grew out of those connections. 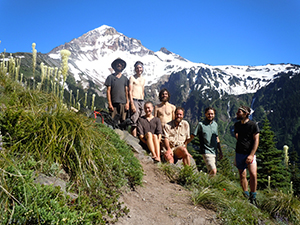 A dozen years later Touching Earth is ready for our next step. At the moment I live with two students who practice full-time. We’ve floated between houses, had a practice camp in Portland’s expansive Forest Park, taken a three-month bike trip through Washington state investigating other places we might settle, and currently we’re in residence at Tryon Life Community Farm in southwest Portland.

The Sunday group flourishes, and there is much interest in more retreats, workshops, and a residential practice, from current sangha members and also from people around the country who have heard about us through our very limited outreach.

So we’re looking for a home.  Ideally, this would be a modest plot of quiet, natural land, close enough to a population center that we could bike there, and so that we could be of service to a substantial number who want to try our way, especially those without the resources to afford other meditation retreats.

We’d like to stay in the greater Portland area, but are open to moving if a compelling offer elsewhere appears. If you have any ideas, or any questions, please contact us!

1
SHARES
Share
Posted Under: 2014, Sangha News, Spring
About the Author: Satyavayu
Satyavayu is the spiritual guide of Touching Earth Sangha.  He was ordained a Zen "monk" or "priest" by Kobun Chino Roshi, and trained extensively at Bukkokuji Monastery in Japan (with Harada Tangen Roshi), as well as more briefly at monasteries in Korea and China. He now studies and teaches taiji, qigong and Indian raga as part of his practice. He can be reached at touchingearth@riseup.net.