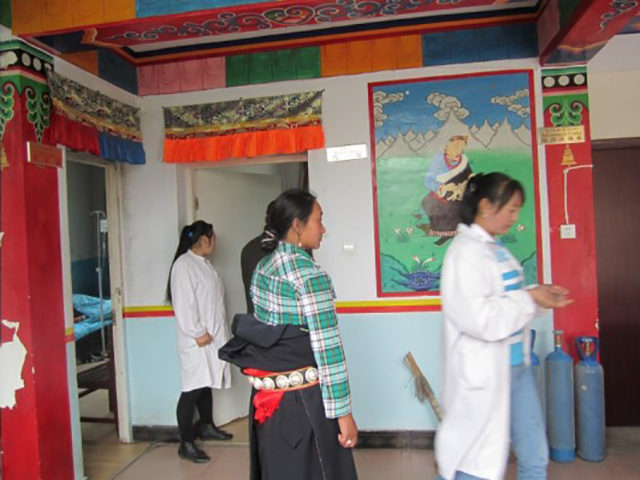 Sometime this spring, in a modest facility in the region historically known to Tibetans as Amdo (now called Qinghai Province of China), female physicians and staff of the Tibetan Birth Center will welcome their 2,500th baby into the world, safely and compassionately.

The center, in the town of Rebkong, is one of the many evolving projects of the Seattle-based Tibetan Healing Fund, which through an entirely volunteer board works to improve primary healthcare and education for rural Tibetan women and children, in the Tibetan regions of China. 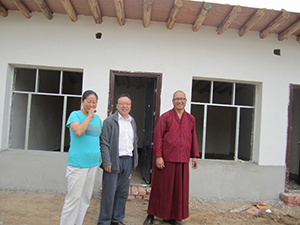 Dr Tsering Kyi, Dr Lasumgya (dean of the School of Tibetan Medicine at Qinghai University); and Kunchok Gyaltsen, in front of the building site for the additional 14 rooms.

To accommodate the growing number of women receiving care, the center has been growing and adding capabilities.

Last year the center added 14 more patient rooms, and an additional birthing room. In addition maternity waiting areas were added, a big improvement in an area of the world where transportation to a hospital during labor is unrealistic and often impossible.

The birthing center, which opened in 2009, was the vision of its ongoing director obstetrician-gynecologist Dr. Tsering Kyi.  Birth numbers have steadily increased, now averaging 50 per month, clear evidence of the value of offering maternity care in a linguistically and culturally harmonious manner. 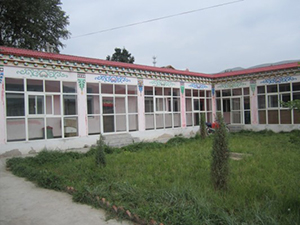 The buildings were initially designed to house classroom space for educational forums and conferences, as well as clinical exam rooms and birthing suites.

The Tibetan Birth Center’s hiqh-quality maternity services, and facilities, have been attracting Mongolians, Chinese Muslims, and other ethnic minorities in addition to Tibetans.

Gyaltsen earned his doctorate in public health from University of California, Los Angeles in 2011, and returned to Tibet to work at TsoNgon (Qinghai) Medical University as an advisor to the dean and on the faculty. He also continues to coordinate the work of Tibetan Healing Fund. 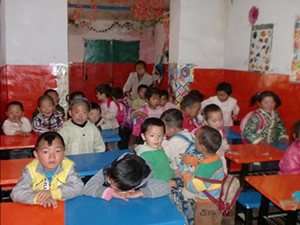 Children in the nursery.

The services offered by Tibetan Birth Center are critical to the health and well-being of thousands of Tibetan women, and their children.

Most Tibetan women deliver their babies at home, often in cold and unsanitary conditions, without a knowledgeable or skilled attendant, and impossibly far from medical support should the need arise.

As many as 1 percent of Tibetan women die in child birth, a rate that is among the highest in the world, and 60 to 70  times the maternal death rate in the West.

The situation is equally perilous for Tibetan babies, up to 4 percent of whom die in the first month, a figure that doubles in the first year. This is 10 to 15 times the infant death rate in the West.

Gyaltsen and Kyi established the birth center, and several training programs, to address these needs.

The facility offers women high-quality care during pregnancy, in delivery, and after birth, from Tibetan professionals, all of them women. Hospitalization is available nearby if needed.

The center also focuses on education, and has created “Community Midwife” and “Maternal-Child-Health Worker” trainings, intended to prepare people to offer better health care at the village level. 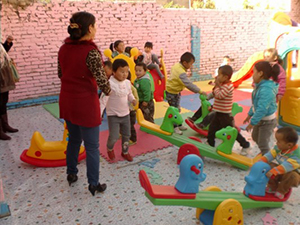 Intensive training of 20 village women to serve as community midwives.

Conducting a follow-up study to collect demographics and determine if these midwives were in fact being utilized by members of their villages and surrounding areas.

Organizing conferences focused on child and maternal health care for physicians across Tibet.

Beyond that the center also has been training women to improve the health improve health education at the family and village level.

Publishing of pictorial pamphlets to be used by village and nomadic women to learn about their own health, and that of their children.

Production of a movie about women’s health, which is to be aired on national Chinese television, and which is directed primarily toward Tibetan women and families. 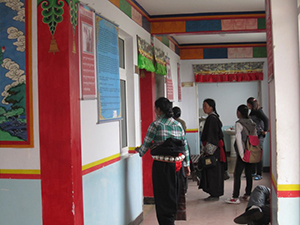 The center serves Tibetan women, and others, from around the region.

Education for ethnic Tibetans also has become an important part of the offerings of the Tibetan Healing Fund, to a much-greater degree than founder Gyaltsen ever imagined.

When he originally envisioned a non-profit to support his people locally, he had in mind simple sponsorships of elementary age children, particularly girls, to attend school in his village.

Since then, education projects have expanded to include teacher trainings, higher education sponsorships, and publication of Tibetan “primers.”

These are written in Tibetan by local teachers and principals about the artists and musicians of their local areas, the geography and history, and fables (and origins) of Tibetan culture.  With a commitment to preserve the language and integrity of Tibetan families with young children, Tibetan Healing Fund continues to support schooling at the village level. 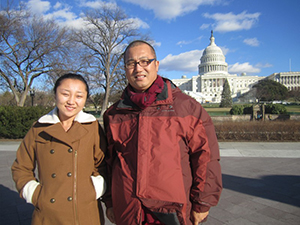 Yangchu Tso, daughter of Dr Tsering Kyi, and Dr. Kunchok Gyaltsen, in front of the capitol building in Washington, D.C. Tso was studying English in Virginia.

Gyaltsen’s work also may be connecting with the Northwest in new ways, after he and other high-ranking officials from Qinghai University met in November with leaders of Bastyr University.

The university, just north of Seattle, is one of the nation’s leading naturopathic colleges, with a School of Traditional World Medicines, which includes departments of acupuncture, East Asian medicine, and ayurvedic sciences.

While the discussions were very preliminary, the two institutions are exploring a possible affiliation, through which offerings in Tibetan medicine might be set up.

Tibetan Healing Fund only exists because of its in-country partners: well-connected Tibetan medical doctors and other professionals in education.

These connections have been of great benefit to the larger Amdo area. When an earthquake hit the nearby Yushu region in 2010, Tibetan Healing Fund was able to raise money to support emergency medical care for earthquake victims, mobilized and coordinated by our in-country partners.

0
SHARES
Share
Posted Under: 2014, Compassionate Action, Spring
About the Author: Marge Mansfield
Tibetan Healing Fund board member Marge Mansfield is a long-time midwife in Seattle.  She is co-founder of Seattle Midwifery School (1978), now known as the Department of Midwifery at Bastyr University where she has been on faculty. She also is co-founder of Seattle Home Maternity Service (1981), a midwifery practice offering care to women planning home and birth deliveries.