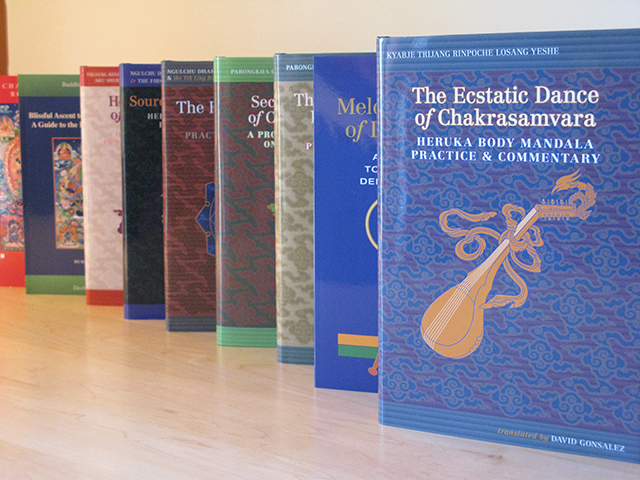 After a surge of financial support from around the world, Seattle-based Dechen Ling Press is completing the publishing of five key Tibetan tantric texts, and providing for their digital preservation in the future.

Located in the Fremont neighborhood of Seattle, Dechen Ling Press has raised more than $65,000 to publish the texts, which are from the Gelug lineage of Tibetan Buddhism. 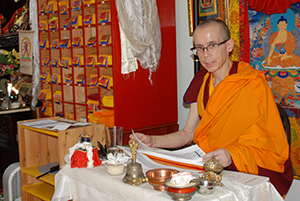 Losang Tsering reading the Chakrasamvara Root Tantra, which has been published by Dechen Ling Press.

The texts, translated by Losang Tsering (David Gonsalez), reflect his intention to provide rare translations of key commentaries and their associated ritual texts, on esoteric practices fundamental to the Gelug lineage.

These forthcoming books include commentaries to the practice of Vajrayogini, Lama Chopa, the Six Yogas of Naropa, the Stages of the Path to Enlightenment (also known as the Lamrim), and others.

Due to the widespread misrepresentation of Buddhist tantra, His Holiness the Dalai Lama has repeatedly emphasized the need for the translation and publication of authentic tantric texts.

To this end, Tsering has devoted the last 25 years to the study and practice of these lineages, and 17 years to the study of the Tibetan language. Based on this he has translated more than 50 ritual texts, and has published 13 books that provide rich and detailed commentaries to these practices.

He also teaches at the Dechen Ling Buddhist Center, also in the Fremont neighborhood of Seattle.

In the winter of 2011, Tsering was diagnosed with inoperable, terminal liver cancer, and since then has been working tirelessly to bring his vision to completion. With a renewed sense of urgency he poured himself into his work, spending thousands of hours reading and translating these sacred texts.

However, once the translations were complete, Tsering found Dechen Ling Press lacked the funds to publish the new translations. 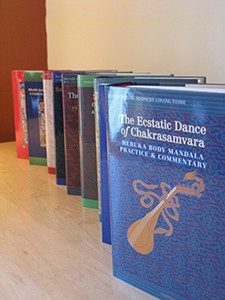 In October Tsering reached out to his community, students, and close supporters, requesting their assistance and stressing the value of such publications to current and future generations. Within just one week, Dechen Ling Press had raised almost $60,000, and nearly $7,000 more came in throughout the following month.

This outpouring of generosity provided the funds necessary to publish these invaluable books. Dechen Ling Press is now one of the major contributors to the publication of Tibetan Buddhist texts, specializing in the esoteric teachings of tantra.

Countless woodblock prints of Buddhist scripture, and the blocks from which they were printed, were destroyed in Tibet following the Communist invasion in 1959. Thousands of these texts have been lost forever.

Fortunately, however, many of the texts found their way safely across the border into countries such as India and Nepal, where many people have worked to preserve them.

Now, as they translate these texts into English, publishing houses like Dechen Ling Press are reaching a worldwide audience of English-speaking Buddhist students and practitioners, who would otherwise have no access to these texts. In this way, Dechen Ling Press is making a small but invaluable contribution to the conservation of the powerful wisdom contained within the texts.

Tsering received the teachings on these texts, and their oral transmission, from one of his primary teachers, Lama Gen Lobsang Choephel, who made five trips to Seattle to teach at Dechen Ling.

Lobsang Choephel made a special and concerted effort to convey a vast array of textual lineages, oral commentaries, and transmissions to Tsering, while personally overseeing his study and practice. Under his teacher’s guidance, Tsering completed all the relevant retreats associated with each practice, which ensures that the translations are in accordance with the 1,200 years of the Tibetan Buddhist lineage. 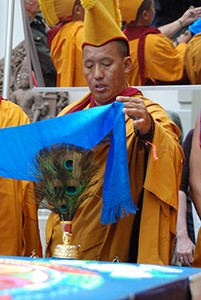 Geshe Konchog Tenzin, here offering a khata (scarf) to the sand mandala at the Seattle Asian Art Museum in 2011, will take over teaching once Losang Tsering’s illness makes it impossible for him to continue.

Dechen Ling Press was established in 2007 as a branch of Dechen Ling non-profit 501 c(3), and was developed with the intention of creating accessible translations of key tantric practices for students unable to read the texts in Tibetan. Now, with the publication of its five latest titles, Dechen Ling Press has accomplished its immediate goal, and is looking to its next translation projects.

Dechen Ling Press is also in the process of establishing an online data base containing images, recorded teachings, videos, and other related materials, which will ensure the availability of its publications far into the future. In this way, as new and dedicated Buddhist practitioners receive the appropriate initiations into these practices, they will have continued access to these profound texts and to the invaluable guidance they hold.

Motivated by this broad vision Dechen Ling Press is expanding its operations, and in February moved from Dechen Ling Dharma Center in Fremont to a nearby office.

In March Dechen Ling Press was searching the local Buddhist community for a new employee to work in the distribution department. The part-time position was for someone to contribute three days a week, three to five hours a day.

Wanting his work to continue past his lifetime, Tsering has asked Geshe Kunchog Tenzin, of Ganden Monastery in India, to be the resident teacher once Tsering becomes too ill to continue teaching. Geshe Kunchog has accepted the invitation, and is currently working with Dechen Ling to prepare the necessary paperwork for his stay in the United States.

You can learn more about Dechen Ling Press and sign up for their newsletter for upcoming events by visiting their website.

0
SHARES
Share
Posted Under: 2014, Dharma Education, Spring
About the Author: Losang Tsering
As a practicing Buddhist for 25 years, Losang Tsering is a monk in the Gelug tradition of Tibetan Buddhism. He is the cofounder and president of Dechen Ling, a  501(C) (3), and also serves as the resident teacher and translator for Dechen Ling Buddhist Center and Dechen Ling Press.