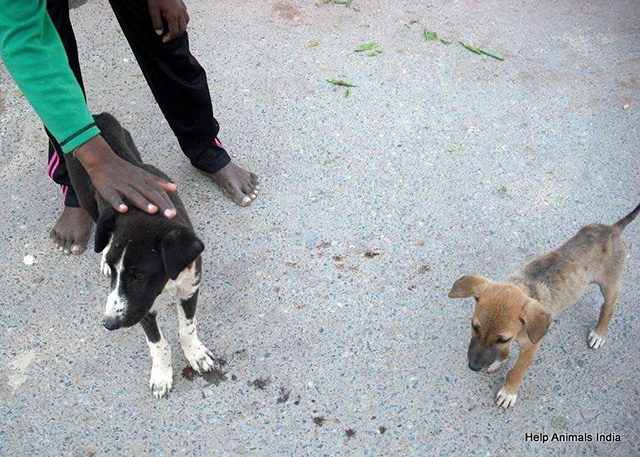 This story has everything:  A leading Buddhist pilgrimage site; a friendship of several decades; compassion, children… and lots of dogs!

For Buddhists, Sarnath, India, is the place where the Buddha first taught the dharma, a beginning that is called the “First turning of the wheel.” 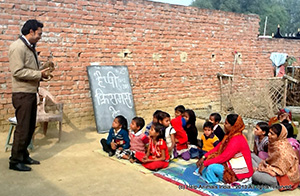 A program to increase awareness about stray dogs among young people.

But for the many stray dogs who live in Sarnath, the northern Indian village is a place of suffering, where few care for their health and nutrition needs, despite the many Buddhist pilgrims there.

To alleviate this problem, myself and my long-time friend Ani (Lama) Jangchub Zangmo in 2013 formed a team, supported by the Seattle-based Seattle based 501(c)3 charity Help Animals India.

Since Sarnath is one of the Buddhism’s four most important Buddhist pilgrimage sites, many pilgrims visit each year. But since Sarnath is so close to the holy city of Varanasi, with its big hotels and many guest houses, most tourists make Sarnath a day trip.

The tiny village of Sarnath is very poor. And like elsewhere in India, hungry street dogs are everywhere. Rabies is a constant threat.

Many tourists and Buddhist students come and go in this poor village, but Ani Jangchub was so upset about the condition of the dogs during a visit last year, that she vowed to make a difference.

The dharma is about helping sentient beings. She contacted me, and that is how this project came together. We’re old friends since the 1970s, and we’re still hoping to change the world, to make it a better place. This project was born out of a lasting long-time friendship and mutual deep caring for the suffering of animals.

And early this year, help for the dogs arrived in Sarnath.

A team of seven vets and vet technicians, from the Indian animal welfare organization Sarvodaya Sevabhavi Samstha, traveled by train from their south India home of Bangalore, to Sarnath.

During their three-week birth control and rabies vaccination camp, stray dogs were caught humanely, spayed or neutered under anesthetic in sterile conditions, given an anti-rabies vaccine, and then returned to the same area where they were captured.

This has proven highly effective in controlling both the dog population and rabies. De-sexed and rabies-vaccinated dogs will not breed but will continue to protect their territories. This stops unvaccinated dogs from entering the area bringing the risk of rabies.

The traditional method for controlling stray dogs and the spread of rabies in India has been catching and killing all street dogs, but this has proven to be unsuccessful all across the country. 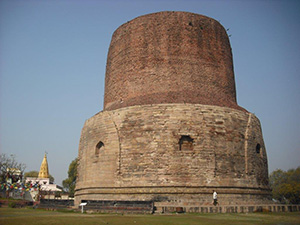 The great stupa in Sarnath, where Buddha first taught the dharma, is a major Buddhist pilgrimage site in India.

Because the population of street dogs is dependent on available food and space in a given environment, if street dogs are poisoned, killed or otherwise removed, the remaining population multiplies rapidly to fill the empty biological niche. In addition, dogs from outside are able to infiltrate, bringing fresh infection.

Just imagine, before this work started there was no help for the village dogs, rabies was a big fear, and maimed puppies were a common sight.

Before now, the children were given no education on how to interact with the dogs, and it was not uncommon for dogs to be stoned to death.

Before now there was no available vet care for ill and injured dogs and dogs were left to suffer in the streets.

Now a Buddhist heritage place can become a place where dogs can live in serenity as well!

This work has come together so beautifully, and has received the blessings of His Holiness the 17th Karmapa.

The Karmapa visits Sarnath and Bodhgaya each year, and this year he inaugurated an Animal Welfare Project in Bodhgaya and gave his blessing to the Help Animals India project in Sarnath.  (Now many animals are receiving the love and care they deserve in these two sacred Buddhist pilgrimage sites.)

According to the World Health Organization, about 35 million street dogs live in India, and as many as 20,000 people die each year from rabies-transmitted dog bites.

This is particularly relevant in small rural areas such as Sarnath, where humans and animals live in close proximity and the poor are unable to afford anti rabies vaccines if bitten.

Any donations through Help Animals India can help this work. Just $15 will spay or neuter and vaccinate one dog. The project is now set up to help 250 to 300 dogs, with an education component for the villagers.

0
SHARES
Share
Posted Under: 2014, Compassionate Action, Spring
About the Author: Eileen Weintraub
Eileen Weintraub is founder and president of Help Animals India, an all-volunteer charity, and is also a practicing Buddhist. She lives in Lake Forest Park, just north of Seattle, with her understanding and supportive husband Mark Daniel Johnson, and with rescued companion animals.