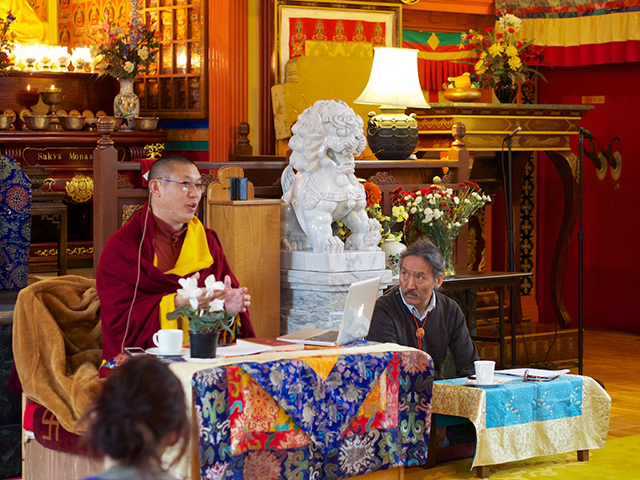 Khenpo Jampa Rinpoche taught on how to perform a retreat, at Sakya Monastery of Tibetan Buddhism, in Seattle.
Photos by: Ed Tang

On Jan. 19, students were blessed to receive core instructions on how to perform retreat, from Venerable Khenpo Jampa Rinpoche, at Sakya Monastery of Tibetan Buddhism in north Seattle.

Khenpo-la taught in front of the monastery’s altar, which features a large gleaming statue of the Buddha Shakyamuni flanked by statues of Padmasambhava, Green Tara, and the first and fifth patriarchs of the Sakya lineage. These statues are in turn surrounded by butter lamps, incense braziers, and offerings of fruit and flowers.

Khenpo-la came to Sakya Monastery in 2009, and currently resides and teaches there.  He is originally from Derge, a city in the Kham region of eastern Tibet.

A group of about 15 students sat in a semi-circle around Khenpo-la, carefully taking notes on the retreat instructions, given in a way easy for 21st century practitioners to understand.  The event was streamed live so that his students in the United States, Hong Kong, Taiwan, Singapore, and Malaysia could receive the teachings. 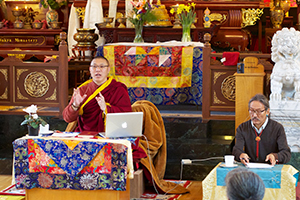 Khenpo-la’s teachings were translated by Rigdzin Tingkhye, owner of the Pema Karpo Tibetan store in the Greenwood area of north Seattle.

Before undertaking a retreat, Khenpo-la said, it is necessary to receive the empowerment, oral transmission, and commentary on the practice.  The practitioner also should receive specific instructions for retreat, and  recitation goals to be completed over the course of the practice.

“The best support for your successful retreat practice is the guidance of a qualified teacher,” Khenpo-la said.

He stressed that to perform a serious retreat, one should have a master accompanying oneself, meaning visiting in person or nowadays with technology, by communicating on the phone.  It is important to be able to consult your master about things that may come up while one is performing retreat.

Khenpo-la spoke about the three most popular meditational deity practices in the Tibetan tradition and the benefits of those practices. He also gave us a general outline of the procedure for performing a retreat practice using the Vajrapani retreat as an example, and ended with a brief story about obstacles in retreat practice, followed by general advice and encouragement.

Three of the most popular meditational deities in the Tibetan tradition are the three lineage protectors familiar to many forms of Buddhism, a triad of Bodhisattvas who embody the basic qualities of the Buddha. They are Avalokitesvara  (Tib. Chenrezi), the bodhisattva of compassion; Manjushri (Tib. Jambe Yang), the bodhisattva of wisdom; and the wrathful Vajrapaṇi (Tib. Chana Dorje), who epitomizes the Buddha’s limitless power.

Vajrapani is often used as a focus of retreat because he protects dharma practitioners, helps to remove obstacles to enlightenment, helps to overcome fear, and can relive anxiety and sadness.

Khenpo-la described offerings that are used when one is performing a retreat.  There are some offerings that are common to many deities and some that are deity specific.  He described specific offerings for performing a Vajrapani retreat, using a shrine with two levels.  On the top level, there should be a thangka or  statue of the deity.  In front of it on the top level, one should put a torma offering  to the deity.  In front of the torma should be seven offering bowls to the wrathful deities. 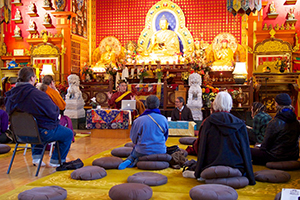 A small but rapt group of students absorbed Khenpo-la’s teachings on accomplishing retreat.

Khenpo-la described the general format of retreats, telling the group that the day is generally broken down into three to four sessions, with three sessions being the ideal for Vajrapani practice.

Many masters will not eat after lunchtime during retreat, so Khenpo-la suggested we do the same if we are healthy enough.

Between practice sessions, based on many long mantra recitations, one can continue to practice by doing prostrations to the 35 Buddhas or reciting other prayers like the Aspiration of Samanthabhadra.

At dinnertime one should make offerings.  Before bed, one should perform a sleep yoga practice, visualizing the pure land of the deity before entering the sleep consciousness.

He reminded us that this was only a general outline of retreat practice, and urged us to consult with our teachers before performing retreats. Though these instructions were based on the Vajrapani retreat practice, he said the same general procedure can be followed for most retreats.

Khenpo-la told us this story: Once a great master sat down to perform a retreat, but every single day as he closed his eyes to begin recitations, a vision of a leg of meat appeared before his eyes, which disturbed him greatly.

Finally he decided that the next time the leg of meat appeared he would stab it!  Sure enough the leg of meat appeared once more, and he tried to stab it. Immediately he felt as if he had awoken from a deep sleep. He simultaneously realized that he had plunged the knife into his own thigh, and perceived the form of the deity in a flash of inspiration.

If we encounter persistent obstacles, Khenpo-la instructed us to view the obstruction as a great motivation to keep practicing. He said we should become aware of the distraction and then refocus on our practice.

“Don’t ever discourage yourself in practice,” Khenpo-la said to us. “Everyone is able to practice!  Be confident and have faith in the blessings of the lineage.  All the blessings that we have been fortunate enough to receive, that of a human birth, of receiving the dharma and of encountering spiritual friends, all of these will come to nothing if we do not practice.  It is our choice to make these blessings worthwhile, to use them for the benefit of all beings – let’s all practice enthusiastically!” 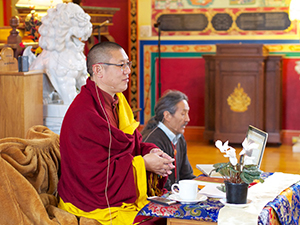 Receiving instructions from a qualified teacher is the primary requirement for long retreat, Khenpo-la said.

He added that we don’t have to go to a far-off mountain to do retreat, but can do it anywhere, including at home.

“This is a simple general instruction. When one wishes to go on retreat, they must have a qualified teacher to guide them,” he said. “At the conclusion of the retreat, it is necessary to make a mandala of the deity that you are doing a retreat on and conduct a fire puja.  If anyone needs help with this, I would be happy to help you individually.”

“Khenpo Jampa Rinpoche gave a wonderful dharma talk this afternoon,” said Edward Tang. “He gave us useful pith instructions and guidelines for performing a retreat in the Tibetan Buddhist tradition, and used colorful anecdotes to illustrate the benefits of retreat, the finer details of deity meditation, and the importance of the three tutelary deities to Tibetan Buddhism.”

Student Gail Shurmann said it was very helpful to hear the rare teachings on doing retreat.

“This is a topic rarely covered in either lecture or texts. Khenpo-la spoke in Tibetan, which is a rare treat to hear, and was translated admirably by Rigzen,” she said. “We are so fortunate to have the chance to hear from the very mouths of people who have spent their entire lives living the Buddhist path, and have accomplished what we aspire towards. With warmth, humor, and insight of experience they bring to our very doorstep a culture and philosophy that can seem exotic, inexplicable, and mysterious, and make it accessible and inviting.”

0
SHARES
Share
Posted Under: 2014, Dharma Education, Featured On Home Page, Spring
About the Author: Kristine Honda, ND
Kristine Honda, ND, serves as coordinator of The Virupa Educational Institute at Sakya Monastery of Tibetan Buddhism, serves as an adjunct faculty member and clinical supervisor with Bastyr University, and sees patients in private practice in Shoreline, Wash. Brandon Lee works as an educational consultant and life-coach. He runs free after-school programs for middle and high school students in Seattle's International District, while trying his best to support Khenpo Jampa Rinpoche in his dharma activities.