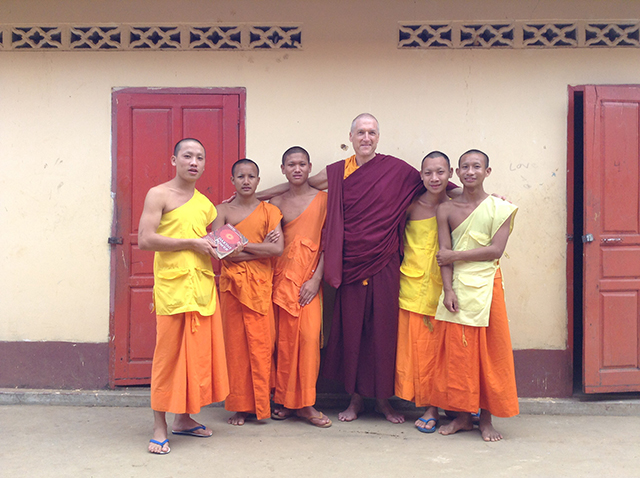 Jampal Gyatso, also known as Clark Hansen, was welcomed by a group of young monks at a monastery in Luang Prabang, Laos.
Photos by: Clark Hansen, Ven. Manit

When I first went to Asia in 1970, it all seemed so much simpler:  Find a guru, get enlightened, and all the tedious details of life would simply fall into place.

Now, many trips later and a little more grounded on the path, my most recent four-month journey, in late 2013 and early 2014, took on a different meaning for me. It was an opportunity for unscheduled travel as a Buddhist monk, away from the security and routines of our Dorje Ling dharma community here in Portland. 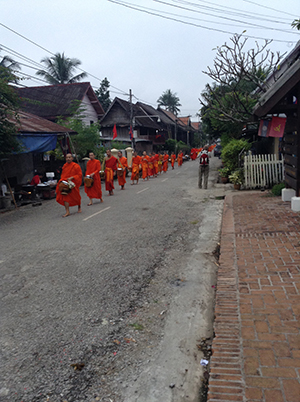 Though the first part of the trip had a clear objective- a month-long series of empowerments at Shechen Monastery in Boudnath, Nepal- the rest of the trip became an open, reflective journey through traditional Buddhist communities, to connect with these ancient roots of our tradition.

From the start I felt the need to let go of expectations, to be receptive to the people I met, and to be as spontaneous as possible to arising situations.  While I didn’t expect special treatment as a monastic, it was still difficult, at first, to not be accepted as a legitimate monastic.

This was totally understandable in cultures where people had not seen Vajrayana monastics nor Western monastics of any tradition.  In fact, outside Nepal and Northern India, not one person I encountered had ever seen a Western monastic, and some did not think it was possible for Westerners to be Buddhist, let alone monastics.

Gradually, resigned to any reaction, I began to find that direct communication opened many doors, and resulted in a wonderfully rewarding experience.

And one of the best parts of being in robes was that I was deemed totally worthless for tourist business. Most hawkers didn’t even try to sell me anything, which was a wonderfully new experience in India!

Then there was the more typical, unexpected and somewhat uncomfortable experience of being a tourist spectacle.  I encountered a wide range of reactions that reflected these traditionally Buddhist cultures.  Entering Laos was a good example.

Boarding the plane in Bangkok for Luang Prabang, Laos, I was asked by officials to leave the line and sit down.  What’s happening? 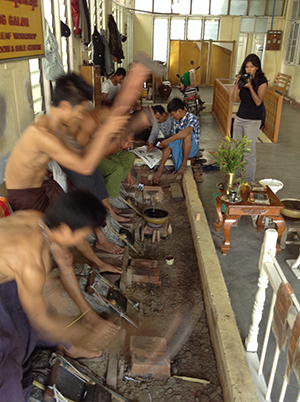 Then an official asked me to follow him through security and out a side door of the Bangkok terminal.

“Get into that car,” he said, without explanation.

Now, I was really worried.  Someone took the wheel and drove me away.  But surprisingly he drove me out onto the runway, where I was directed to board an empty plane and given the entire front row to sit in.

Then, when I was coming into Laos, I had difficulty getting through customs because they questioned my monastic status. Why that should even be a concern puzzled me, but a long debate ensued among many customs officials, who requested that I prove I was ordained. This continued for quite some time, long after everyone else had cleared customs and left the airport.

Apparently, impersonating a Buddhist monk in this devoutly Buddhist country is a serious offense.  Upon entry, however, the kind, warm-hearted and generous Lao people paved the way for a beautiful visit.

On my last day in Cambodia, I made a commitment to abandon the tourist track and my Lonely Planet guide book, and just follow the monastic route. While I knew I could be more invisible if I just wore street clothes, as many people, including monastics, had advised me to do, I traveled in robes the entire time.  Although street clothes would have been more comfortable, I would never have had the contact with local people I ended up having.

Tourists would gravitate around me, especially the Chinese tour groups. They all wanted to take pictures of me or with me, often draping their arms around me like we were best friends. 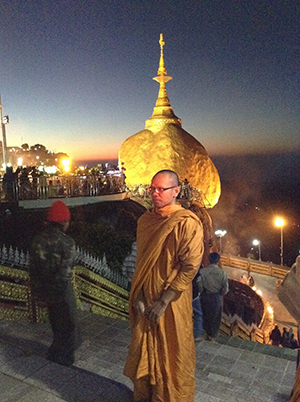 At first this was very uncomfortable, but it gave me an opportunity to find out more about their relationship with Buddhism.  It was fascinating to hear about the reemergence of Buddhism in Chinese communities, about the tension between Buddhist and Islamic minorities, and about their approaches towards practice.

Being a tourist spectacle was almost unbearable at Cambodia’s Angkor Wat, where I just wanted to spend days wandering the temple ruins, rather than doing photo shoots. But regardless of what I wanted for myself on this journey, I found myself to be the unsought-after face of Western Buddhism, and knew this might be the only contact with Western Buddhists that many of these people would ever have.

My conduct was under constant scrutiny.  The one time I lost patience with an unscrupulous taxi driver in front of several locals, was an incident I regretted.

If I stopped for even a second on the street people would immediately engage, question or challenge me.  Complete strangers on the street would point-blank ask me, “Do you have sex with women?”  People would also ask how often I ate meals, if I ate meat and how long I meditate.

Abandoning the Lonely Planet Guide and throwing myself into the monastic unknown had its appeal and great uncertainty.  But once I made the commitment, doors surprisingly opened to me.

As I flew to Bangkok from Siem Reap, Cambodia, on my way to Yangon, Myanmar, I met a group of Thai monks in the airport who were on my flight to Myanmar (Burma).  Immediately, the head monk requested (almost commanded) that I travel with them.

They were on pilgrimage, I had no idea to where, and their English was very limited.  I was elated just to make the connection, not knowing what I would have done otherwise, after walking out the Yangon airport door.

When we arrived in Yangon there were huge lines for passport and baggage inspection.  No problem.  As monastics we were escorted through the diplomatic line.

Then we met our hosts and were whisked off to the stupendously amazing Shwe Dagon Pagoda complex, which was unlike anything I’ve ever encountered. 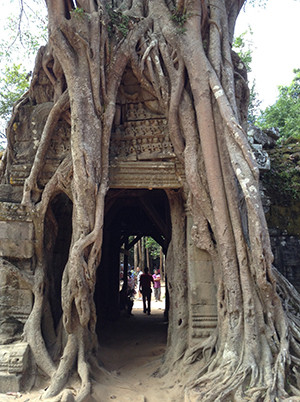 It was evening and the pagoda was packed with thousands of people.  All the pagodas, temples, stupas and shrines sparkled, glittered and shined.  The 53 metric tons of gold that encases the main temple, which tradition says was built 2,500 years ago, was glittering with 5,000 diamonds. At the top of the spire is a fist-sized diamond, which can be seen clearly at night from a distance.

The next morning the head monk said we were going out for coffee, which after little sleep and a 3:30 a.m. rising sounded great.  But then our driver kept going and going. Where was this trip headed to now?

We drove several more hours out into the mountains.  On a distant mountaintop I saw our destination: A golden temple, the amazing Kyaiktiyo pagoda, which is precariously perched on a gold-encrusted rock.

Going separate ways back to Yangon, I flew to Mandalay as it was just turning dark. That was my first mistake.  Don’t go searching for a monastery at night.

While I waited for a taxi three Burmese airport employees approached and bowed. One said, “It is our custom here to give to monks,” and then handed me a cold Coke with a straw and napkin. It was really heartwarming.  At the same airport, weeks later, I was presented with a can of beer while waiting for my plane. 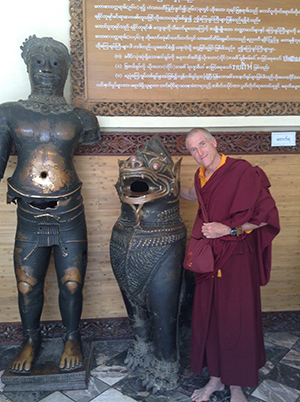 After a night in a hotel, around daybreak I left to explore.  An older man came right up to me, dropped his jaw and stared at me from head to foot with utter disbelief, looking almost horrified as he circled at close range around me, speechless. Everyone else seemed stuck in their tracks when I passed, motorists weaving to have a look, people pointing, laughing and dropping everything they were doing, to watch me pass.

Without my Thai monk brothers, I no longer had the stamp of authenticity that seemed conveyed by being in their presence.

At Phaung Daw Oo Monastery they wholeheartedly took me in, gave me a room, fed me, took me on a tour of Mandalay, and asked me to spontaneously speak to two groups at the monastery.  Once that connection was made it led to a connection at another monastery in the amazing ancient temple city of Bagan, which easily rivals Angkor Wat in scope and splendor, with its many thousands of ornate, ancient Buddhist temples, some very active.

My Thai monastic companions had insisted I come stay with them in Bangkok. So upon my departure from Myanmar I went there and participated in their daily activities, sidestepping ongoing street protests.

The traditional image of monks meditatively wandering down quiet lanes with their begging bowls is very different from the reality I experienced in Bangkok, walking barefoot down dark, pre-dawn alleys in the clutter and chaos.  But it was rewarding in ways I can hardly describe.

Were I to travel like this again would I do it differently?  Though I was anxious at first about leaving the familiar tourist track, when I made contact with the monastic communities the quality of the experience was greatly enhanced.

Non-monastics seemed to be very welcome in some of the monasteries, especially if they were willing to take part in the activities and social services provided by the monasteries to the communities.

Part of the uncertainty is that it’s necessary to be adaptable to whatever the situation is.  Whenever the monks rose, went on alms rounds, ate, meditated, work, that also became my routine.  Cold showers, broken windows, no toilet paper, questionable food…well, that’s the way it is.  But to be a part of their lives and contribute, is to transform an ordinary tourist trip into something much more meaningful, a vehicle for communication between cultures that might not happen otherwise. 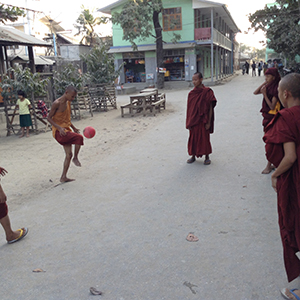 Occasionally I would see other Westerners at these monasteries, and they were often returning because of the rewarding experience.  I highly recommend this for people who are flexible and adaptable enough to deal with these situations.

The people are warm and open to the foreign guests who are respectful toward their traditions.  They are engaging, and they wish to make contact, to learn English, to know who you are and how you practice your Buddhist path.

Pilgrimage or traveling through the landscape of our Buddhist heritage is illuminating and inspirational.

To travel to these communities and experience their traditions is a life-altering experience that may soon vanish as they develop.  It is my wish that my brothers and sisters in the dharma could taste this for themselves in an authentic way.

0
SHARES
Share
Posted Under: 2014, Sangha News, Spring
About the Author: Jampal Gyatso (Clark Hansen)
Jampal Gyatso (Clark Hansen) is a fully-ordained Vajrayana monk and director of Dorje Ling (Portland Yeshe Nyingpo), a Nyingma Buddhist center under the direction of Ven. Gyatrul Rinpoche since 1988, in northwest Portland, Ore. Hansen also is a former board member of the Northwest Dharma Association.