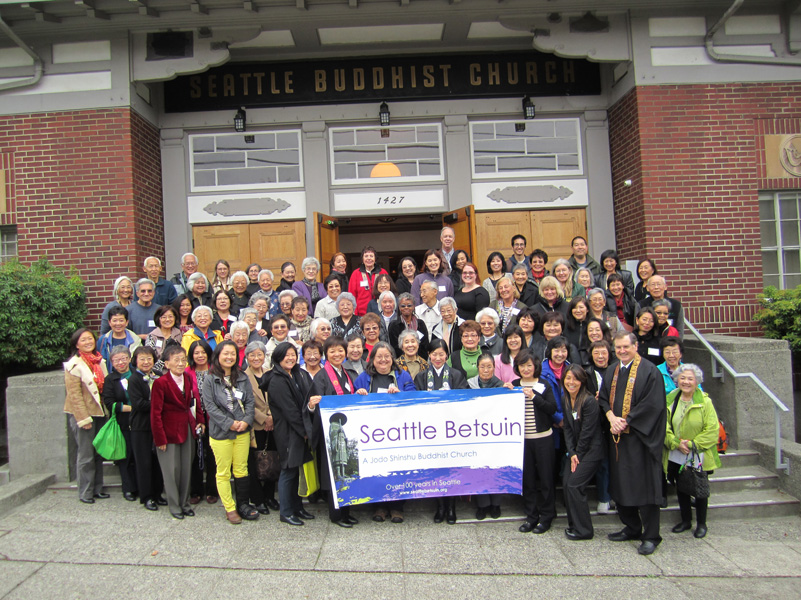 The theme, “The Heart and Mind that Benefits Others,” was presented by three notable women from differing backgrounds – two ministers and one college professor – who focused on the connection between Buddhism and women’s everyday lives.  Currently, women’s roles in temples have been growing, and this conference was yet another way for women’s voices to be heard. 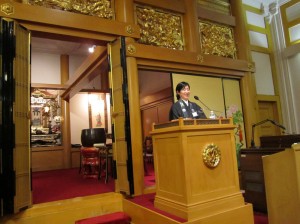 Rev. Mariko Nishiyama speaking, from inside the main shrine room at the temple.

The fall day at Seattle Betsuin Buddhist Temple, (also known as Seattle Buddhist Church), began at 9:30am with the ringing of the kanshō (the medium-sized calling-bell), and chanting of the Sanbujō, (Three Respectful Callings), by Rinban Don Castro.

Each of three speakers spoke individually in small group sessions. Coffee breaks and an hour-long lunch of vegetarian bento (boxed lunch) in the gymnasium provided opportunities for reunions and for making new acquaintances. The day ended with everyone gathering for a group photo on the temple steps, and a question-and-answer period where it began – in the hondō (the main sanctuary), with the three speakers together.

Women in the Jōdo Shinshū tradition of Buddhism, (True Pure Land or Shin Buddhism), have been an integral part of the temple structure in the U.S. since the turn of the last century, beginning with Eshin-ni, the wife of the sect’s founder, Shinran Shōnin,  (1173-1263), and their daughter, Kakushin-ni, both known for their devotion and support of Shinran Shōnin.

Six hundred years later Lady Takeko Kujō (1887 – 1928), founded the Buddhist Women’s Association in 1904, in an effort to enhance the role of women in temple life. 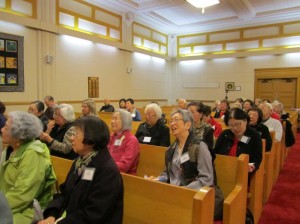 Kujō is best known for her humanitarian activities, particularly after the great Tokyo earthquake of 1923, when she was instrumental in the construction of the Asoka Hospital.

Prior to the main speakers’ presentations, Midori Takagi presented a short biography of Lady Takeo Kujō and her humanitarian works. Takagi is an associate professor of history at Western Washington University.

The examples of compassion modeled by these three historical women were reflected in the presentations offered by the three contemporary women speakers at the conference.

Rev. Patricia Kanaya Usuki, a priest from San Fernando Valley Hongwanji Buddhist Temple in California, spoke with compassion and wit, urging us to be mindful of the dharma in our daily lives in an active, not passive, way.

Usuki said Lady Takeko Kujō founded the Jodo Shinshu Buddhist Women’s Association to promote the status and solidarity of Buddhist women in Japan. Sufferings are what informed Kujō about herself and the world, and Usuki reminded us that historically in Japan women had no status, with the women’s suffrage movement starting only in the early 1900s. 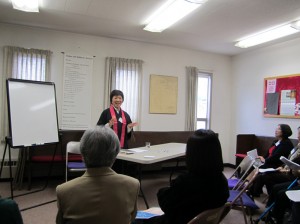 Usuki cautioned not to get stuck on karmic causes and conditions, but rather to use them to inform self. (Karma means action, not destiny or fate.)

Public schools teach children “You did it all yourself,” while Buddhism teaches our “oneness” with everything, she said.

When greeted with, “How are you?” Japanese Buddhists reply “Okage sama de,” which loosely translated implies “Because of you and others, I am doing well,” Usuki said.

In the U.S. we reply, “I am fine,” which she said could be interpreted as, “I did it all myself.”

Usuki is author of several books, including the recent “Currents of Change: American Buddhist Women Speak Out on Jōdo Shinshu.”  Born in Toronto, Canada, she has served in the International Department of the Nishi Hongwanji in Kyoto, Japan, and as an European language specialist (French, Spanish, Portuguese, German, and Italian). 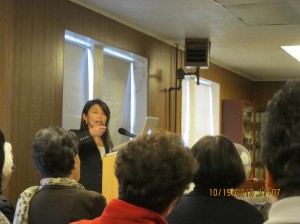 Naomi Kasumi, an artist and an associate professor of fine arts and Asian studies at Seattle University, talked about the role of memorials in helping people come together and cope with loss.

In her talk Kasumi revealed that various kinds of memorials encourage people to talk and to remember, and to experience their own pain and loss, which help survivors heal.  Her workshop was a presentation of “MEM: memory – memorial,” her ongoing project that addresses pain, loss and issues of cultural identity and heritage prompted by her experience with abortion.

Each of MEM’s 10 component projects emphasizes ritualistic and ceremonial processes to create sacred and meditative spaces. During the workshop Kasumi displayed photos of her MEM projects and shared some of the behind-the-scenes logistics and thought that went into the design, construction and staging of each.  More information about her work can be found from this site, and another site. 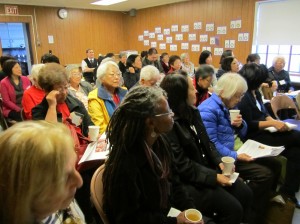 In the spring of 2011, Kasumi completed an artist-in-residency at the Sanskrit Pratishthan Residency Program in New Delhi, India.

Rev. Mariko Nishiyama, resident minister of the Pearl City Hongwanji Buddhist Temple in Hawaii, spoke with passion about her feelings that the heart and mind are sick in our society, citing the Oklahoma City bombing as one example.

Nishiyama asked, “How do we support others in their difficulties?” and then explained that we can employ upaya, (Sanskrit for skillful means). The teaching of the Buddha is the heart and mind of compassion.

She then asked, “How do we help someone in need?”

Nishiyama said we have to do our best to help, and that helping is a natural response of human beings. She explained that the sect’s founder Shinran Shōnin avoided all “self-power” methods to reach realization or enlightenment, except for reciting the nembutsu, ”Namo Amida Butsu,” which means the “Buddha and I are one.” In this way, Shinran was practicing what Nishiyama called “other-power.”

Nishiyama told the story of a girl who lost her eyesight at the age of 11. At first she was very sad and complained tearfully to her mother. Finally, acceptance came, and she became a teacher in a school for the blind. 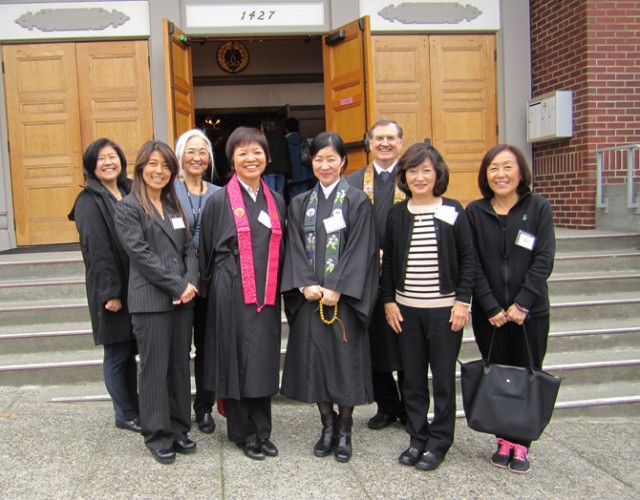 Each person receives great compassion from Amida Buddha to share with others, Nishiyama said, and more is needed of the heart and mind of Amida Buddha in society.

Born and raised in Japan, Nishiyama is a graduate of Dendoin, the Buddhist Institute for the Propagation of Buddhism.

The program ended at 3:30 pm, but many attendees lingered to talk to the speakers and to each other. The feedback was positive, with attendees rating the speakers excellent to good, preferring women speakers, and suggesting women from other Buddhist traditions for future events. The third Women in Buddhism Conference at Seattle Betsuin is tentatively scheduled for Oct. 18, 2014.  Please stay tuned.

0
SHARES
Share
Posted Under: 2013, Compassionate Action, Featured On Home Page, Winter
About the Author: Pat Bobrow
Pat Bobrow has been a member of the Seattle Betsuin Buddhist Temple for about 20 years, and greets visitors as they enter the temple before each Sunday service. She also contributes her “Notes on Dharma Exchange” (a Sunday after-service discussion and social) in the monthly newsletter. She says, “Also, during Bon Odori, a two-day celebration in July, and other large events, I participate by helping in the kitchen along with dozens of other members and friends. It is rewarding and much fun.”