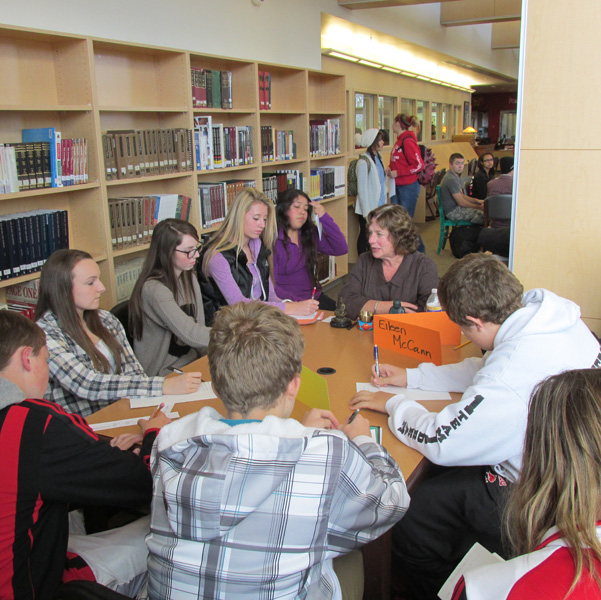 Eileen McCann talks about the dhrama to a group of students at the Snohomish High School Library.
Photos by: Steve Wilhelm

Every year, every one of the sophomores at Snohomish High School gets a mini- course in Buddhism.

Not just Buddhism – the students also get a glimpse of Christianity, Hinduism, Islam and Judaism – through a twice-yearly morning program called World Religion Forum. 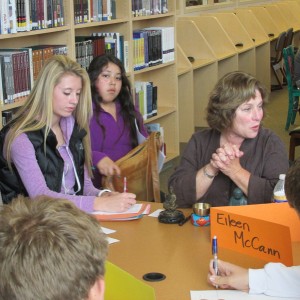 The event is sort of like religious speed-dating, with a morning and an afternoon session. During each session 10 instructors, two from each tradition, present to 10 small groups of students at stations around the high school library.

Each session is just 30 minutes, and when a buzzer sounds the students rotate on to the next station, with each presenter talking to five groups of students in just under three hours.

In each 30 minutes the Buddhist practitioners pack in a lot of dharma, finding time for some background, some elements related to the students’ lives, some questions, even three or four minutes of meditation.

While some of the students seem bored and disengaged, others are very curious about Buddhist practice and how it’s different from their own background, generally Christian. The presenters are peppered with some very interesting questions, like “Why is the Buddha fat?” referring to statues of the laughing Buddha, or “What are malas (prayer beads) for?” 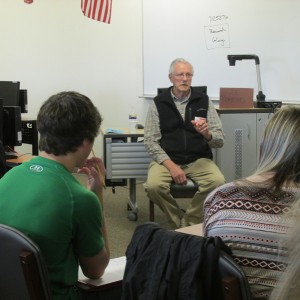 “Some of the deepest moments with the students at Snohomish High School, are when I speak about ‘doing no harm,’” wrote Eileen McCann, a long-time Vipassana practitioner who has presented at the high school for six years, in an email.

“I speak about the harm we do in our speech and thoughts, in our sexuality, and in our wars.  When I ask them what would do no harm in these different areas (harm to self or another), it brings very deep thought and responses,” she wrote. “Since sexuality is the “hot” topic at this age, I say that to do no harm sexually, is to not take what is not given, to not share what one is really not ready to offer, to not speak about one’s experience in a way that would harm another.”

McCann adds that she has learned to talk about the four noble truths in ways the students will understand.

“When I speak about ‘suffering’ and ‘attachment,’ I tell them that if I gave them everything that they desire right now, I guarantee it would make them miserable.  And then I explain the changing nature of things, and especially those things that we think give us an ‘identity,’” she wrote. “Again, this really opens them to looking at what they thought had value, and perhaps sets their priorities on a different path.  Basically, bringing the dhamma into their lives at the level that they are living, is what I aim for.” 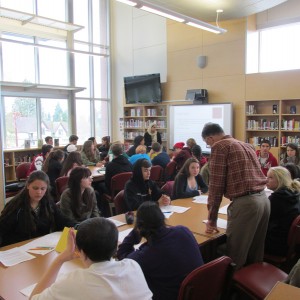 An Islamic and a Christian teacher, at adjoining tables.

Here’s what five of them said, in notes they sent afterward as part of their assignment:

“I loved meditating. It was very relaxing, which is nice because of my crazy schedule. Thank you for showing me something I will use for a long time.”

“The meditation was very cool, too. It sure will be a way to help me focus better.”

“You taught me the mind is in the heart, and that meditation can help one clear their mind and observe what is around them. When we were meditating I felt something I had never felt before. I felt a calm feeling. I was at ease, and all of my worries disappeared. I could see the world around me, and the great impact that each one of us leaves.”

“Being able to meditate was a wonderful experience. It was so calming, and for the first time in a while, I was relaxed.” 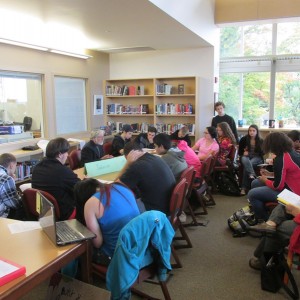 A Jewish leader discusses his tradition with a group of students.

“I plan on using meditation as a relaxation tool. I often get very nervous for school, and meditation will greatly help with my focus.”

The twice-yearly event is coordinated by Lisa Stettler, who teaches history at Snohomish High, which serves the small rural town of Snohomish, north of Seattle.

One time years ago a female Islamic student came up to Stettler, and proposed bringing someone from her tradition to explain Islam to the class. The Islamic presenter then suggested bringing in leaders or teachers from other traditions, and World Religion Forum was born.

Over about a dozen years, the forum has proven a great success, Stettler said.

“The kids say at the end of every semester,” she said. “‘This was the best day of this class.’”

0
SHARES
Share
Posted Under: 2013, Compassionate Action, Winter
About the Author: Steve Wilhelm & Eileen McCann
Steve Wilhelm is editor of Northwest Dharma News. He primarily practices Vipassana, although is also influenced by the Dzogchen tradition of Tibetan Buddhism. His primary sangha is Seattle Insight Meditation Society. He works as a journalist in Seattle.

Eileen McCann has practiced Vipassana for 21 years, mostly at Spirit Rock Meditation Center. There she was a substitute teacher for her original and primary dhamma teacher, Robert Hall. She was a psychotherapist for 40 years, and is now an actor. She presently practices, and sometimes teaches, at the Atammayatarama Buddhist Temple in Woodinville, Wash.