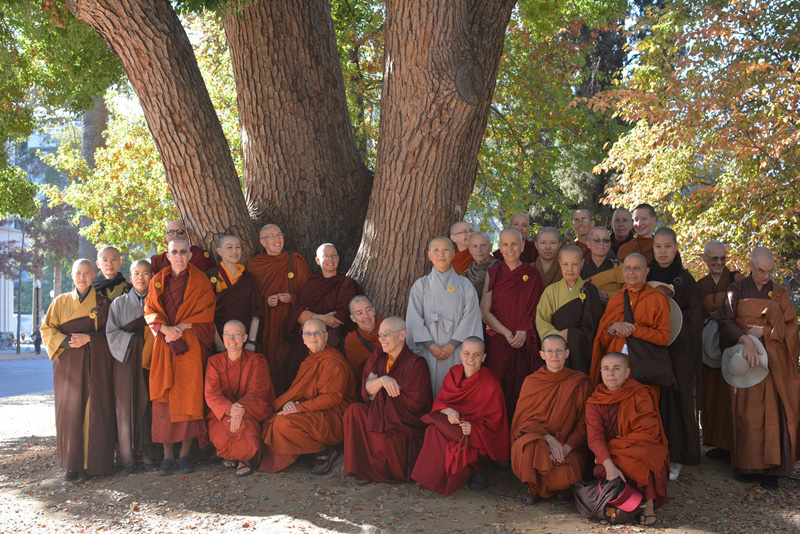 This is a photo of all the nuns attending the gathering this year, far more than the monks.

Five culturally Western monks and nuns from the Northwest joined more than 40 colleagues from around the world in late October, for a four-day gathering to explore and strengthen our monastic lives.

The theme of the Oct. 21-25 Western Buddhist Monastic Gathering was “Monastic Formation,” which refers to how training as a monastic helps guide and develop people as spiritual human beings.

We met at the City of Dharma Realm, a Chinese nunnery in West Sacramento, Calif. This was the 19th of these convocations.

“Culturally Western” means that while all the monastics weren’t born in the West, we share certain Western values, and culturally identify more with the West than with Asia.

Attending monastics from the Northwest were:

Ven. Thubten Jampel from the road, as an itinerant wandering monk.

(Here’s a video of a talk by Thubten Chodron, about the gathering.) 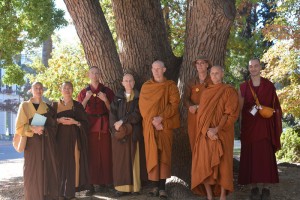 Monks from many traditions attended the gathering this year.

The Western Buddhist Monastic Gathering is a gathering of 40 to 50 culturally Western, English-speaking ordained people from all the Buddhist traditions, who gather for a week of fellowship, exploration and connection.

A wide range of monks and nuns gathered, including Theravadin, Tibetan, Chinese, celibate Zen of the Shasta Abbey tradition, Koreans, and Vietnamese.

In terms of experience in robes, they ranged from less than a year to more than 40 years. Added together the monastics had trained for 583 years, creating much wisdom to share.

Some of the monastics were attending the gathering for the first time, while others have been coming for nearly two decades.

The gathering is quite like a family reunion, where monastics form friendships and connections with other monastics across traditions, where they learn much from each other’s experience and practice.

“There are many different views on the way the dharma is presented, but no one here says, ‘My way is correct!’ It is very harmonious,” said Ven. Thubten Tsultim, a newly ordained nun from Sravasti Abbey. “Everyone has their own opinion, but everyone is trying to develop themselves to be of benefit.  We’re all trying to get to the same point: freedom from suffering for everyone.” 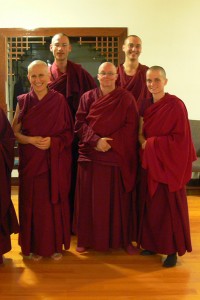 Monday was the travel and registration day, and the monastics were joyfully greeted at the Sacramento airport by lay people, who then offered their cars to take the monastics to City of Dharma Realm.

As the monastics arrived they were warmly greeted at the main entrance gate by a nun in Chinese robes, who dashed over to open it with a big smile.

Tuesday morning’s meeting began with a community-building exercise, where the nuns and monks shared their names and where they were from. Then, without using any words, they tried to express to the others what they enjoy doing other than meditation.

This exercise got the gathering off to a warm and jovial start with lots of laughter and smiles, which helped create a relaxed and informal atmosphere.

Our first meeting featured a panel of elder and junior monastics sharing their experiences of taking robes. In the afternoon two abbesses shared what training and practice looks and feels like, from their viewpoint as community leaders.

On Wednesday the monastics divided into small break-out groups, and explored tensions between traditional Buddhist cultures and contemporary Western values and culture as it relates to Buddhist practice in general, and monastic practice in particular. This discussion was followed by larger break-out groups, exploring how we can find solutions to these tensions.

Friday morning featured a two-mile Buddhist Global Relief Walk through downtown Sacramento, where we raised awareness about hunger in the world.

After a picnic, that afternoon we explored the influence of Judeo-Christian conditioning on Western Buddhists, and how it subconsciously influences our worldview and practice.

The Western Buddhist Monastic Gathering performs a number of important functions for our regional monastics. 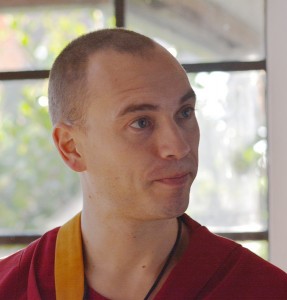 Ven Thubten Jampel in conversation with other monastics.

Monastics living in communities have an opportunity to meet with monks and nuns from other communities. And for those who live and train alone, such a gathering presents a much-needed opportunity to connect with other nuns and monks, restoring their inspiration and enthusiasm for the monastic life.

“This is perhaps the most important week of my training year.  It is certainly the week I look forward to the most,” said Ven. Lodru Dawa. “Training alone as I do, without the gathering I am not sure I would still be a monk 13 years along now.  It means so much to me.”

Mornings at the gathering started with an optional meditation with the host community at 4 a.m.  Some nuns and monks joined the host nuns chanting in their large Buddha hall, while others quietly meditated in their rooms to prepare their minds for the day, or to complete daily practice commitments.

Those with very busy schedules in their home communities sometimes worked in some extra rest, as the gathering also functions as a form of rest and recuperation.

A social and friendly breakfast with coffee and tea was the first gathering of the day.  Later came lunch: A marvelous array of vegan Chinese dishes served buffet style, and eaten in silence.  Everyone was amazed at how delicious vegan Chinese food can be!

Following lunch was a two-hour open time for monastics to become better acquainted, to learn about each other’s traditions and practices, and to explore challenges and successes in their practice. For those returning to the gathering, after lunch was time to reconnect with old friends, or an opportunity for relatively junior monastics to meet with very senior elders of the sangha. 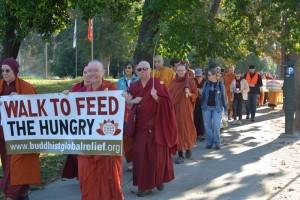 About 40 monastics joined the Buddhist Global Relief walk, which is an event, founded by Bhikku Bodhi, intended to help provide emergency food aid around the world.

Next was the afternoon session, followed by what’s called “medicine meal,” for those who require extra nourishment for the later hours of the day. (Most monastics do not eat after noon.)

The evenings were flexible and left open to use as needed, depending on what happened during the day.  There was ample time for fellowship with all the other nuns and monks, and sometimes we had break-out groups on specific subjects.

On Thursday evening everyone greatly enjoyed a performance of dharma songs and puppet dharma teachings by Rev. Heng Sure.  His song, “Craving is the builder of this house,” is an wonderful example.

This year’s host community, City of Dharma Realm, is a nuns’ training community in the Chinese Chan tradition, and was founded by Venerable Master Hsuan Hua.

Those attending were amazed how well the City of Dharma Realm nuns cared for, fed and supported the monastic gathering. This was demonstrated in the wonderful food offered, the small soaps thoughtfully placed in our bathrooms, even the young nun pulling weeds from the crack between the curb and the pavement. All of it demonstrated kindness and hard work, for which we remain very grateful.

The nuns operate two schools, the “Instilling Goodness Elementary School,” and the “Developing Virtue Secondary School.” The school children took great pleasure helping us get tea during our afternoon break. They always had the most amazing and happy smiles.

It was quite wonderful to see all the Buddhist monastic traditions present in one place, with yellow, maroon, ochre, brown and black robes.  They appeared as a living, organic dharma quilt, sharing their experience with each other joyfully, and building lifelong friendships.

At the Western Buddhist Monastic Gathering, we monks and nuns discovered again and again, that there is much more in common between the various traditions than we realize.

0
SHARES
Share
Posted Under: 2013, Sangha News, Winter
About the Author: Ven. Karma Lodru Dawa
Ven. Karma Lodru Dawa is an ordained monk in the Tibetan tradition. A determined innovator, he enjoys exploring different forms of practice in very diverse circumstances, including traditional long solitary retreats, work practice in the community, bicycle pilgrimage, exploring how to practice directly with and thrive with his own intense chronic pain and illness, endurance cycling and more. He says he learns more from mistakes than success, and that the worst things in life turn into the greatest blessing if practiced with over the long term. He lives in a small hermitage in the forest in the Pacific Cascades, near Clatskanie, Ore.