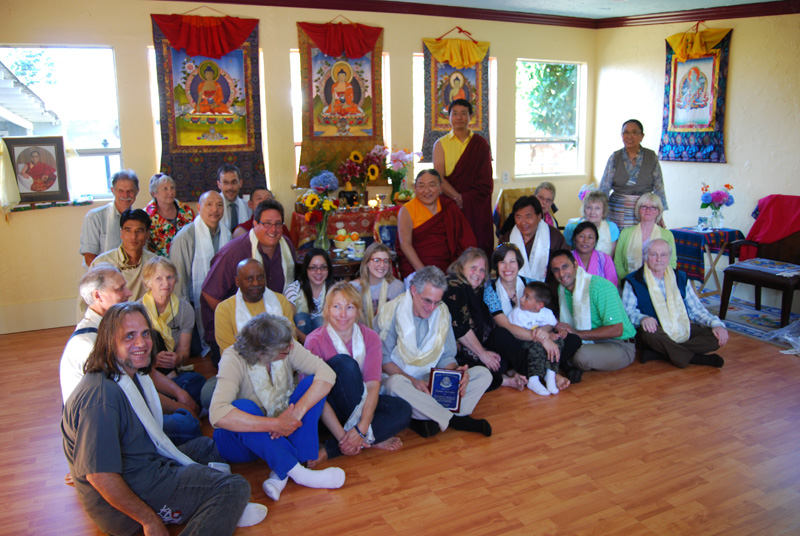 “This place is pretty run down,” observed Geshe Jamyang, “Can we make it work for us?”

“Well, at least it’s not red and totally covered with punk graphics like when it was a tattoo parlor,” I remember saying.  “It will be a huge project, but the property does have many benefits.”

With this conversation, and countless variations more, in October, 2009 Nalanda Institute in Olympia took the first steps toward fulfilling a long-held dream of our spiritual director, Geshe Jamyang Tsultrim: creating our own dharma center property. 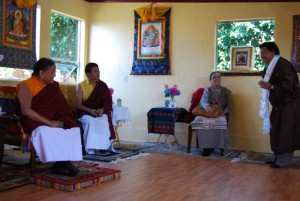 Sakya Trizin and Geshe Jamyang, together in the new space.

I’m now vice president of Nalanda Institute, and back in 2009 I had little idea of the magnitude of the step we were taking.  But by 2013, we were able to celebrate many things.

This was the 25th year that Geshe Jamyang has been teaching dharma in the United States, the tattoo parlor and associated buildings had been transformed into a beautiful dharma center, and new members and programs were vigorously sprouting.

On Sept. 29, more than 70 people gathered to celebrate Geshe Jamyang’s 25th anniversary of dharma teaching, an event held at the Olympia Golf and Country Club.

Commemorative letters were sent by H.H. Sakya Trizin and H.H. Dagchen Rinpoche, and I had a chance to share with guests the highlights of Geshe Jamyang’s work, and of our efforts to create our own center.

Although Nalanda Institute dates back to 1988, membership had always been relatively small and widely fluctuating. By the time we looked at the rather odd collection of buildings on this property near downtown Olympia, we had firmly decided we needed a property that could generate supplemental income to offset the costs.  Our membership, and dues and revenues from teachings or guest speakers, was not going to cover a mortgage, liability insurance, fire insurance and taxes. 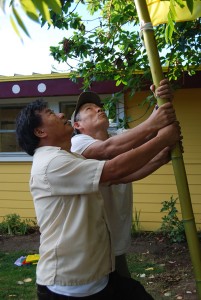 Geshe Jamyang, I and others had evaluated 13 different buildings before finally buying the former tattoo parlor.  With each of those properties we thought hard about the potential for supplemental rental income.  The various properties we investigated lent themselves to everything from yoga classes and rental rooms, to weddings and boarding horses.

The 2009 property, with the former tattoo parlor, a separate two-bedroom house, and a rough garage all on a city lot, was by far the best we had seen, as in most financially feasible. But the property certainly had substantial trade-offs.

The advantages were: High visibility on a major surface street in Olympia, the potential for two rental units, a low initial cost, and basically sound buildings.

But the disadvantages were large:  The 1954 structures were terribly run-down, major remodeling was needed to convert the old garage/shop into a rentable studio apartment, a lot of our budget would go to remodeling instead of down payment, and we would need a lot of volunteer help to accomplish the remodeling.

There were many times when we joked to each other that it wasn’t clear if committing to this project was a great bodhisattva act of service, or just the stupidest thing we had ever done.

But a lot of history had brought us to this point.   We weren’t a new dharma center, we had operated for over 20 years, and for most of those years we had used the Vietnamese Temple in Olympia, Chau Lien Hoa.

There were many benefits to being at Lien Hoa Temple:  a beautiful shrine room, very low costs, an interesting relationship with the Vietnamese community, and no building responsibilities.

But despite those benefits, it had started to feel stagnant.  Membership fluctuated a lot and our scheduling was constrained by being second fiddle to Lien Hoa temple’s own activities.   We had come to realize that we were largely invisible to the community.   To grow, we needed a more tangible, visible presence in the city. 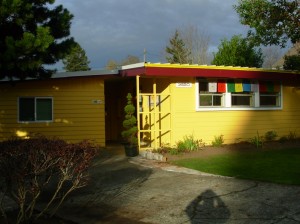 That realization led to our fund-raising years, nearly seven years of active, regular, repeated fundraising events.  We made and sold momos at our food booth, Café Tibet, at community events in Olympia such as Super Saturday at Evergreen College, or the Wooden Boat Fair on the Olympia waterfront.  We put on gala Tibetan dinners sometimes serving 200 people, and held silent and live auctions with goods people had donated.   We sold dharma goods that Geshe would bring back from Asia trips.  We held garage sales.  At our best dinner we netted $8,000.  By 2009 we had a kitty of $50,000.

Of course the crucial element in the decision to transform the tattoo parlor was that core members felt a deep respect and devotion for Geshe Jamyang.  But even in this aspect, there was more than meets the eye.

Geshe knew this would be a huge effort for members.  In the final decision to buy, he made sure it was truly our own choice. He did not push or guide or even urge a yes decision.  He was so respectful of the effort that would be needed from us, he largely left the final decision to the rest of the board members.

It was an interesting example of how the teacher/student relationship works.  Teachers don’t make you do anything.  They make you want to do things.  Geshe’s vision had also become ours.

This bond with a teacher doesn’t happen overnight.  We first met Geshe Jamyang Tsultrim in 1988 when H.H. Dagchen Rinpoche, of Sakya Monastery in Seattle, sent him to Olympia to serve the handful of practitioners who, at that time, were the Olympia branch of Sakya Monastery. 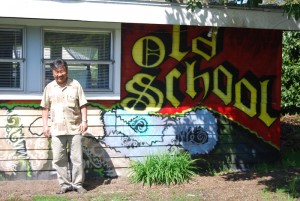 Geshe had impeccable credentials.  He had entered monastic life at 16 in 1970, and by 1984 had a Geshe degree (the equivalent of a doctorate), from Sakya College in India.  He taught Buddhist philosophy for two years at Sakya Institute and for two years in Nepal, was a translator for H.E. Dezhung Rinpoche (now immortalized in the biography titled “A Saint in Seattle”).

But even more important than these accomplishments were Geshe’s personal characteristics — his pure heart, his earnestness and humility, his self-effacing humor and kindness, and a wonderful gentleness.  Those personal qualities had shone brightly through the many ups and downs over 25 years, and formed the major basis for the deep devotion and respect for him, which had arisen within the sangha.

We had gone through many changes with Geshe.  Fairly early, he decided to give up his monk robes and become a lay teacher.  He entered college and eventually became a master’s-level licensed mental health counselor.  During that period, we stopped being a formal branch of Sakya Monastery.

But Geshe was always committed to dharma teaching, and once established as a self-supporting mental health professional, he returned immediately to teaching, and by 1993 established what is now Nalanda Institute.

Lay life expanded Geshe Jamyang’s qualities as a teacher.  His new knowledge of Western psychology, and his experience of Western lay life, combined with his deep dharma understanding and his still-gentle and humble presence, to make his teaching better than ever. 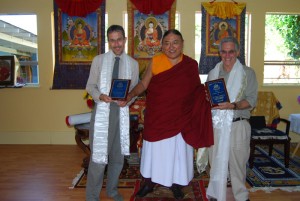 Almost two years after the 2009 purchase, which included 11 months of permitting and intensive volunteer remodeling, we opened the meditation hall in a very auspicious fashion.  In fall of 2011, both H.H. Sakya Trizin (head of the Sakya order) and H.H. Dagchen Rinpoche (head of Sakya Monastery, Seattle) blessed the meditation hall.

By the time of our Sept. 29 celebration of Geshe’s 25th anniversary, the uncertainties and struggles of what seemed like a huge task are behind us, and the decision to purchase that property consistently looks like a Bodhisattva act.

The benefits are now evident.  The highly visible location attracts lots of new faces. The old members are highly energized.  Geshe Jamyang enjoys the freedom of having our own space to shape.  We’re also increasing our program of guest teachers.

The Buddhist moral here are in the third and fourth perfections: patience and diligence.  The Western moral is practicality: the two rental units on the property have freed us from endless fundraising, and allowed us to now focus on creating great dharma programs.

About the author: Bob Saunders is a founding member of Nalanda Institute, Center for Buddhist Study and Meditation and currently vice president. He has been a Buddhist practitioner for more than 25 years, studying mostly in the Sakya school of Tibetan Buddhism.

0
SHARES
Share
Posted Under: 2013, Sangha News, Winter
About the Author: Bob Saunders
About the author: Bob Saunders is a founding member of Nalanda Institute, Center for Buddhist Study and Meditation and currently vice president. He has been a Buddhist practitioner for more than 25 years, studying mostly in the Sakya school of Tibetan Buddhism.