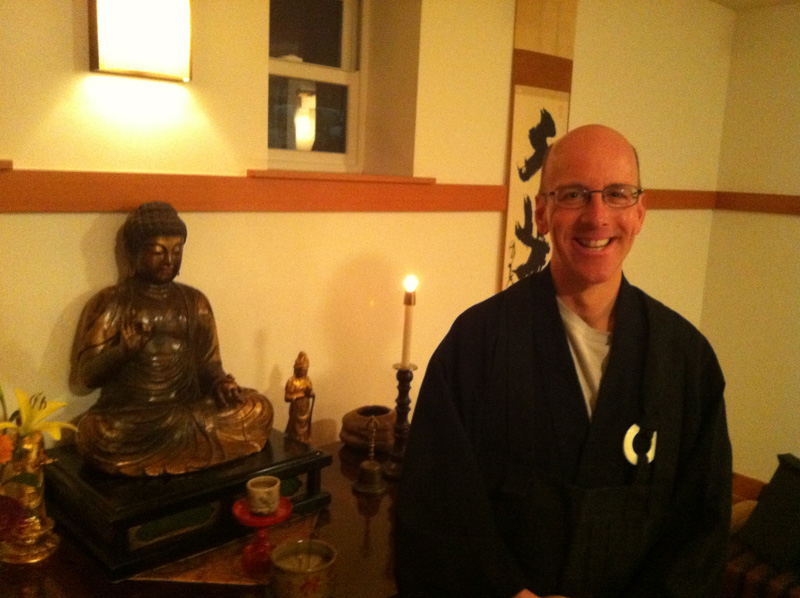 Peter Ilgenfritz at the Cho Bo Ji altar, wearing his rohatsu around his neck. His dharma name there, which he received when he became a member, is Shinke, which means “Profound Home”.
Photos by: Catherine Foote, Peter Ilgenfritz

(Peter Ilgenfritz is a dedicated practitioner of Rinzai Zen, with the Dai Bai Zan Cho Bo Zen Ji Zen center in Seattle. He’s also a pastor and leader at University Congregational United Church of Christ in Seattle. For the last decade Ilgenfritz has been navigating his way between these two traditions, on a unique course he’s still charting.)

I’m taking sailing lessons.  Which is about the last thing I ever thought I would be doing.  I’ve never particularly liked boats, being out on the water, depending on things that are tippy.

But you know those times when you hear something knocking on your heart, telling you to go do something?

I hate when that happens.   I love stability and keeping things the same.  But midlife has been knocking at the door of my life.   And I’ve been experiencing that it’s a season of transformation in my life – from the man I once was into a new man I am becoming.

The skills I developed and used to prove myself, to be productive and proficient, are no longer the skills I need to move forward.  I’ve been forced to pay attention to some things I haven’t before, namely, to myself. 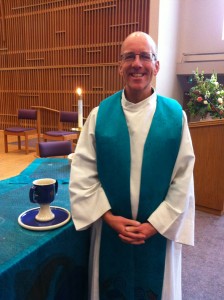 Ilgenfritz by the communion table at University Church, dressed in the white robe he wears each Sunday. The green stole indicated he is ordained pastor.

I have to look within, to pay attention to my changing self in a way I never have before. I have to move into the unknown, the terror and excitement, of discovering again who I am.

I heard a similar knocking at the door of my heart about 10 years ago, when I knew I needed to die to something.  I had no idea what that meant or how to do that, but when I heard the suggestion that I might attend a weeklong Zen meditation retreat, I knew that was exactly what I needed to do.

I’d never meditated.  I didn’t particularly like being silent or sitting still.   But I knew that this was what I needed in order to let go.

It’s a big thing to do something new.  I feel like I’m six again, on the first day of first grade.  Anxious and excited.  Feeling like everyone else knows the rules except me.  It was like that in sailing class last month, and like that on that first Zen meditation retreat.  Who are these people, I wondered, in these strange black robes?  What’s with the chants?  And what language are they chanting in?  Do we really have to eat all of our meals with chopsticks?  And do Buddhists bow to everything?

It’s a big thing to do something new.  Because you don’t know what might happen next.

We had perfect conditions for my first sailing lesson, at least for me. There was absolutely no wind.  We barely made it off the dock.

So, I was feeling pretty good three days later when I came for my second lesson.  And again, it looked like pretty grand conditions, another day with no wind.

But when we got the boat out in the middle of Lake Union, some serious wind began to blow, filled our sails, and sent our side of the boat high in the air.   I’m clinging to the edge of the boat and someone is yelling, “Is this alright?  We aren’t going to tip over?!” 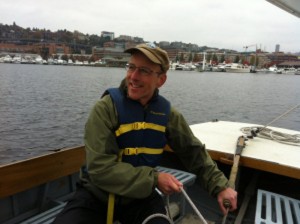 Ilgenfritz at the helm, during a respite in his training.

“Are you sure?!  Are you really sure?!”  And then I realize the person yelling is me.

I’m not exactly sure what a keel is.   Or what it is for.  I certainly have not seen one on this boat.  I wonder if it can break or fall off.  What I do know, is my life depends on it.

I was only an hour into that first meditation retreat, when something happened.  I felt like I did on the sailboat last month – lifted high above the water, teetering on the edge of something I wasn’t sure would hold.

I released a wellspring of tears that I learned to ride all week.  And in and through the terror and the tears, slowly, slowly, a washing away and release.

It was many years ago, a class in my freshman year of college, that I read “Radical Monotheism and Western Culture,” by H. Richard Niebuhr.   Toward the end of the book, he wrote a few sentences that I have underlined and starred many times over the years:

“There is something about reality with which we all must reckon.  We might not be able to give a name to it, calling it only the void out of which everything comes and to which everything returns.  Against it, there is no defense.  It abides when all else passes away.  It is the source of all things and the end of all.”  (pp. 122-123)

As a young man, I didn’t know as much as I do now about what those words meant.  But I knew enough about loss, struggle and fear that Niebuhr’s words planted a question in me that has defined my life.  That is, what is it to have “faith,” to have trust and confidence, in this great void from which all comes and into which all return? 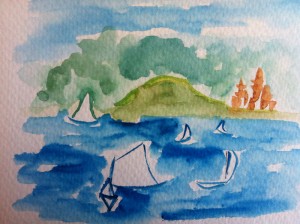 A painting by Ilgenfritz, of boats sailing on Puget Sound.

Christianity talks about such faith coming through Jesus Christ.  Christ, the one who took death upon himself, and in whose resurrection, was born to new life.  Out of death, new life comes.

In Zen, we practice doing that dying and rising.  Every out-breath, a dying; every in-breath, a birth.

For the past 10 years since that first Zen retreat, I’ve spent most mornings sitting with my little Zen Buddhist community.    Nine years ago I became a member of Cho Bo Ji, and made vows to give myself to the Buddha, the dharma and the sangha.

Over the years, I have gone through times of deep questioning, doubt, and struggle about my dual-faith practices and identity.  I questioned why I was taking part in such an odd, rigorous practice as Zen, which requires getting up very early in the morning, and sitting in uncomfortable positions for long periods of time.  I was a practice I never would have “chosen,” if it were up to me.

I wondered how I could really be a member of a Zen Buddhist community, and also a Christian pastor.

And over the years, in the waves of those questions and doubts, has come a deep acceptance:  I can’t imagine my life now without the narrative faith of Christianity, or without the mystery, the silent encounter of Zen.  Both feed me in deep and important ways. 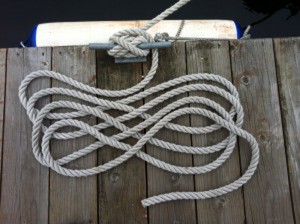 I go to Cho Bo Ji most every morning to “sit, breathe, and listen,” in order to practice being in the little rocky boat that is my life.  I sit spinning in all my worry, pain, anxiety and boredom.

And then most mornings, in the last five seconds of the sit, something happens.   I let go.  Maybe just for a moment, and then I am caught.  Something catches me.  It feels absurd to put words to it.  It’s a feeling, and more than that, a deep knowing, that everything in me is caught by something so much larger than myself.

Doug has been sailing for 40 or 50 years.  And he offered to take me out sailing last Thursday.  That day, unfortunately, there was wind.  As I jumped from one side of the boat to the other, as we tacked into the wind, Doug kept asking, “Can you feel it?  Can you feel it, Peter?”

“Feel what, Doug? Like I’m a little less panicked than usual?”

“Yes, I’m a little calmer.  I feel a little better than I have before.” 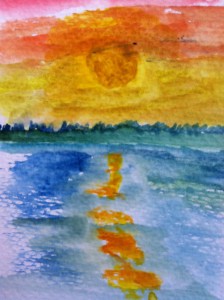 I have drawn great comfort from staying on the wharf that I have made of my life, thinking that faith is all about things being joyful, successful and going quite swell, thank you very much.  I have drawn comfort from all being well with me, in my own little world.

Faith is to be brought right up against that unknown, and to trust.  What Christianity talks about in story, Zen enables me to practice.

I do.  In the wonder of Christian chatter and community, in the song and story of a faith that has grounded my life.  In the still, silent, contemplative way of Zen.

I feel something deep and holding, that is setting me free to sail into my life.

0
SHARES
Share
Posted Under: 2013, Sangha News, Winter
About the Author: Peter Ilgenfritz
About the author: Peter Ilgenfritz has been a pastor and member of the leadership staff at University Congregational United Church of Christ for the past 20 years and a member of Dai Bai Zan Cho Bo Zen Ji for the past 10 years.   Ilgenfritz writes a blog post each week. He learned to sail at the Center for Wooden Boats.