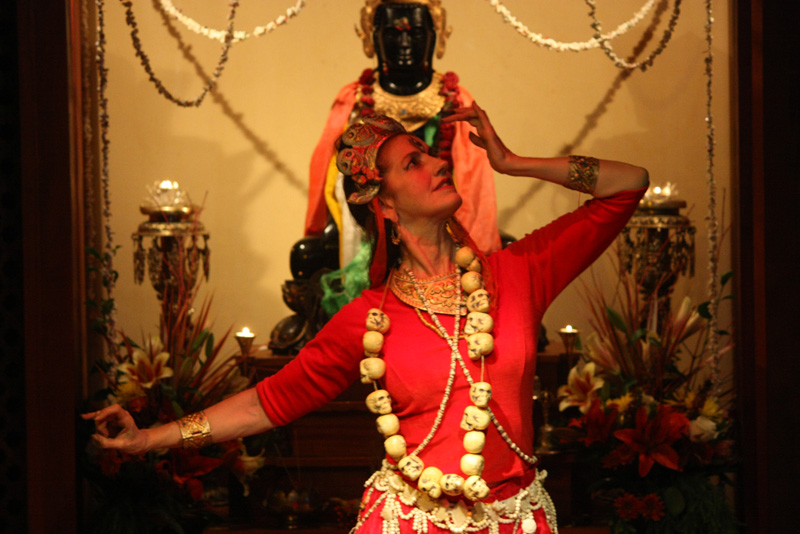 Helen Appell appears in dance as Vajrayogini in all her red glory, holding a vajrachopper in her right to actively cut through tight self-clinging.
Photos by: Helen Appell, Ekamanda Bajracharya, Myriangela Naves, Suva Shakya

This fall Charya Nritya, a rare form of Nepalese meditative Buddhist dance, reached Brazil for the first time from its U.S. temple headquarters in Portland, Ore., expanding the global range of this mudra dance.

In October, at the invitation of my sponsor Myriangela Naves, also called MyriDakini, I flew to Brasilia, the futuristic capital of Brazil, to teach a workshop and classes about Charya Nritya.

Charya Nritya, or Charya Dance, is a dance ritual practiced to manifest the deities while displaying the beneficial engagement of the body as divine gesture of pure intention, known in Sanskrit as mudra.

The Varada mudra of the Goddess Tara’s right hand generously reaches out from her heart center for the welfare of all.  Similarly, the vibrant sacred energy of Charya Nritya radiates from its central space to all ends of the earth, meeting a need for a Buddhist tradition of sacred movement as a powerful method for realization.

Charya Nritya came straight from the Kathmandu Valley to Portland via Prajwal Ratna Vajracharya, the main lineage holder outside Nepal.  Traditionally practiced behind closed temple doors by the indigenous Newar Vajrayana priests of the valley known as Vajracharyas, the dance has spread through Prajwal’s vision.  In Nepal in 1996, Prajwal created an organization, Dance Mandal, which has been benefiting many who may observe or practice it.

After Prajwal and Dance Mandal moved to the U.S. we founded the Portland temple, called Nritya Mandala Mahavihara, in 2009. As I returned from Brazil this fall, it was time to prepare for the fourth anniversary of the temple consecration, celebrated yearly on Nov. 10.

We celebrated the day in its usual vibrant fashion with rituals, feasts and dance. Prajwal Vajracharya, the temple priest as well as dance master, performed a Homa Puja, or fire ritual, while I served as assistant. This is an elaborate four-hour ceremony to awaken Buddha nature in all, and which dispels obstacles for the coming year.

Honoring the longstanding historical and spiritual connection between the Newar and Tibetan traditions, Lama Wangdu performed a Chod ritual during the fourth anniversary celebration. 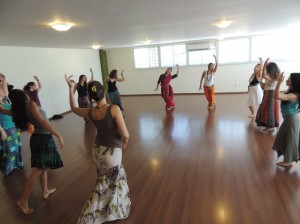 Dancers dynamically stretch opposite energies of reaching towards transcendence, while touching earthward to remain grounded, at the “OM TARE!” studio in Brasilia.

A delicious Nepalese lunch and dinner were served to many visitors from the Northwest sangha, both Westerners and Nepalese with new faces as well, followed by a grand finale of dance.

As a student of Charya Nritya, I have benefited from this deep sublime practice and Prajwal’s patient, fluid teaching.   I also have the great good fortune to serve others by teaching and performing the dance.  Traveling around the globe, we of Dance Mandal receive heartwarming responses, and affirmation that many wish to move their bodies as part of their dharma practice.

The dance of the deities in Brazil

Brazil has seen the dharma spread like wildfire, particularly the colorful Vajrayana tradition of Tibetan Buddhism.  Dharma dance has also come to Brazilians in other forms, predominant among them the group dances of the 21 Tara Mandala of Prema Dasara.

People participating in the Charya Dance workshop included locals and others flying in from different areas of Brazil. Although this was the first time the Newar Vajrayana tradition of Charya Nritya made its way to this large, luscious country, Brazil’s tradition of lively bodily movement made a naturally receptive audience.

The workshop opened with traditional Buddhist teachings, to create the proper foundation for understanding the deities and our own human condition as the basis.

While remaining grounded in these conceptual teachings, the students took the first dance step, learning the Refuge Prayer Dance and song.  This dance begins with mudras of emptying, pushing earthward the old harmful energies and thoughts, becoming the rich ground for heartfelt motivation, filling the body with fresh energies and aligning with the universe. 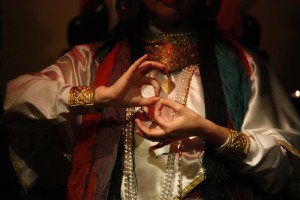 As a preliminary to learning a full deity dance wherein one becomes the deity (which will come  another year!), I taught and explained the significance of the dance mudras of a short Tara praise to purify body and mind, ripening the conditions to arise as Green Tara and realize Tara within.

To internally experience the difference between Tara’s more peaceful compassionate activity and the semi-wrathful, fierce, shifting wisdom energies of a dakini, I taught the mudras, meaning, and dance of a brief praise to Vajrayogini. The praises are Sanskrit songs, learned as a means to purify speech.

I appreciated in the women their true Brazilian colors with their rhythmic, fully engaged movements, innate in inhabitants of a land that thrives on dances such as the joyful samba. What was truly moving was their receptivity to exploring their energetic experience, and their humble sincerity in honoring the deity, the teacher, the dharma, and one another.

The female energies gathered, and whirled in the room through Charya dance, the daily Brazilian mudras of beijos e abraços (“warm kisses and hugs”), grateful tears, and deep sharing. With these affirming expressions, it is true that teaching Charya Nritya is a remarkable forum reminding me that my life is meaningful.

A temple in Portland takes shape and deities manifest

With these travels, both inward and outward, Prajwal and I some years ago realized there was a need for a central temple to serve as a base for exploring more deeply the ritual context of the dance, and its potential practice significance in the West.

As an embodiment of a traditional Buddhist sadhana (all-encompassing daily practice) of a tantric deity in a sacred environment, the dance is intended to be a full sensory experience of deity yoga in motion, including the pure world of a divine mandala. With this in mind, we wanted to provide an appropriate physical space to inspire deity yoga practice and ritual performance.

We completed construction of Portland’s Newar-style temple in 2009, after years of planning, designing, and building. That November was marked by the traditional Newar ritual consecration of the first Nepalese Buddhist temple outside of Nepal, now named Nritya Mandala Mahavihara, or Portland Baha (“baha” being a Newar rendering of “vihara,” a Buddhist study center).

Here’s a 2009 Northwest Dharma News story on the consecration. 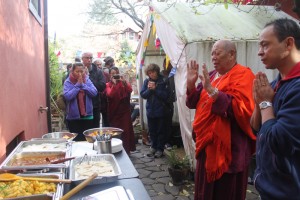 Now we teach and perform the dance locally in an environment appropriate for the deities to arise, deepening our experience and understanding while providing a place for Portland residents and visitors traveling from afar to study a unique movement meditation. From our temple base we continue to expand outward, visiting different continents at the request of those who wish to observe and learn the value of this rare dance form.

For the grand finale of the fourth anniversary celebration, eight Portland Charya dancers and two singers performed the dances of the deities we originally built the space to honor.

The costumes reflected the deities’ vibrant colors, and their ornamentation that manifests in six energetic fields aglow with the six perfections. Thus giving manifests as necklaces, morality as bracelets, patience as earrings, reminding us that we have this capacity within our own human form.

With jubilant responses from so many, again we are reminded of the power of community, ritual, environment and dance, as a way to learn, practice, and celebrate the dharma.

With deep intention, all is divine mudra, creating a universal language recognizable both near and afar. We are sincerely grateful to everyone who has contributed, and look forward to another year of sacred arts and ritual, moving from the Portland center of the mandala to the outer reaches of the earth.

About the author: Helen Appell’s spiritual path included years in India in retreat and studying at the Tibetan Library of Works and Archives, as well as through audiences with, and teachings from, great Tibetan lamas of different sects.

She has trained in Sanskrit, studies thangka painting, and for many years lived as a Zen monastic.  She continues to study and practice Buddhism through both the Tibetan and Newar traditions and particularly through the sacred arts, while incorporating all her background through teaching Charya Nritya .

9
SHARES
Share
Posted Under: 2013, Dharma Healing, Arts, Winter
About the Author: Helen Appell
Helen Appell’s spiritual path included years in India in retreat and studying at the Tibetan Library of Works and Archives, as well as through audiences with, and teachings from, great Tibetan lamas of different sects. She has trained in Sanskrit, studies thangka painting, and for many years lived as a Zen monastic. She continues to study and practice Buddhism through both the Tibetan and Newar traditions and particularly through the sacred arts, while incorporating all her background through teaching Charya Nritya.