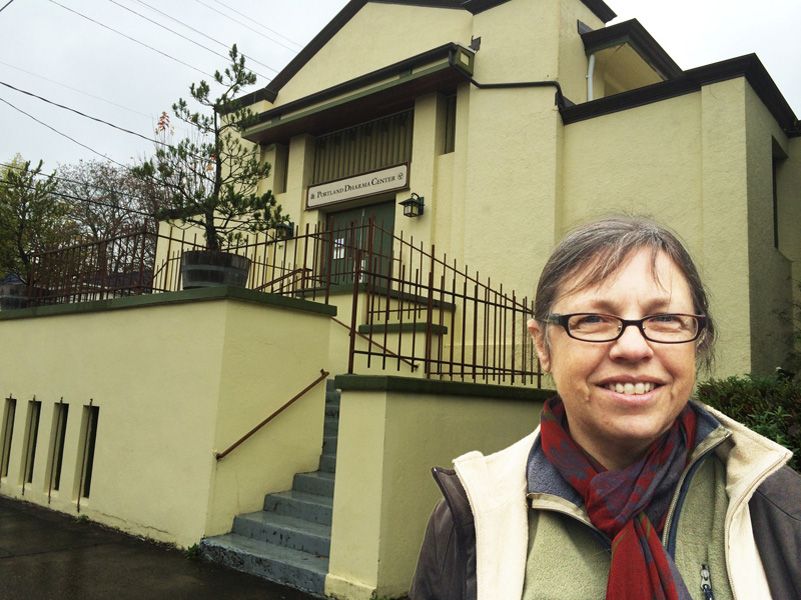 When the directors of Portland Friends of the Dhamma learned last year the building their community had called home for the past seven years was to be sold, they were faced with these questions: “Where do we go?” and “How do we get there?”

Today, with Friends of the Dhamma soon to purchase the former zendo of Dharma Rain Zen Center in Southeast Portland for nearly half a million dollars, these questions and, indeed others more difficult, have been answered with inspiration that has spread well beyond Friends of the Dhamma’s relatively small community of regular attendees.

The Buddha teaches that everything happens within a mesh of causes and conditions. The pending loss of its home set the conditions for Friends of the Dhamma, a Theravada group based on the Thai forest tradition teachings of Ajahn Chah, to consider seriously its future.

Yet it was an offhand remark that pushed Portland Friends of the Dhamma well outside its comfort zone of a manageable $715 a month rent, to an expected monthly mortgage payment of $4,000. 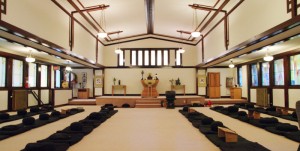 Inside the zendo, zabutons and zafus are arranged in rows, with meditators facing the walls.

The rent was reasonable and the landlord agreeable to all the necessary renovations the church’s Buddhist tenants undertook, to make the space habitable.

As the years passed and Friends of the Dhamma’s community grew and matured, the church’s aging and dwindling congregation made the church less and less viable. Finally the regional Methodist hierarchy decided, late last summer, to close the church and sell the building.

This left Friends of the Dhamma with three choices: disband, find another affordable place to rent, or make a deeper commitment to somehow purchase a suitable church building to convert into a Buddhist center. Because their lease was good through September of 2013, the community had some time to explore options and make decisions. But then the building sold in May, and Friends of the Dhamma began renting the Dharma Rain Zendo so they could continue to offer a place for the community to gather for meditation.

A few months before—in her capacity as teacher and spiritual director of Friends of the Dhamma—Mary Reinard, known as Sakula, was invited to participate in a Shuso Hossen ceremony, at Dharma Rain.

(A Shuso Hossen is a ceremonial step for a senior practitioner in Zen tradition, who gives a talk to the community and then is engaged by the community in dialogue about the talk.) 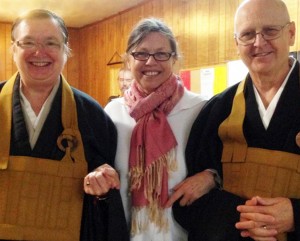 After the ceremony, Co-Abbot Kyogen Carlson was describing to Sakula Dharma Rain’s plans to build a temple and householder refuge on 14 acres in Northeast Portland.

“And so we’re going to be selling this building,” Sakula recalled Kyogen telling her, adding, “You should buy it.”

“Well, that isn’t going to happen,” Sakula had replied. “This is a fantastic building. There is no way we could afford it. But I’ll mention it to our community.”

But this chance exchange proved to be the beginning of an unexpected journey for Sakula, and for her community.

Portland Friends of the Dhamma gets its inspiration and spiritual support from the monks of  Abhayagiri Monastery in Redwood Valley, Calif. Abhayagiri is in the Ajahn Chah lineage of Theravada Buddhism rooted in Northeast Thailand. Relying on the generosity of the surrounding community, in exchange for teaching dhamma, is central to the Theravada monastic way of life.

From its inception in 2000, Portland Friends of the Dhamma had for its survival relied solely on dana—the financial generosity of those within its immediate community. Sakula had been adamant that Friends of the Dhamma should and would exist only if those who directly benefited from its offerings were inspired to give enough to keep the doors open month to month.

The board refused to “fundraise” for any purpose. Donations that went beyond what was needed for rent and daily operations went to bringing monks to Portland, or were used in other ways in support of the dhamma.

Recently, sitting in her temporary office, Sakula admitted a tendency to be overly idealistic regarding dana. In the early days of Portland Friends of the Dhamma’s existence, she said, she could not bring herself to use the customary dana bowl for contributions. To her it was tantamount to asking for money—something she could not bear to do. She had hoped that others simply would be inspired to help her pay the rent.

But, she said, one day she was taken aside by a regular attendee, who suggested that by not having a dana bowl available she was depriving others of the joy of giving. 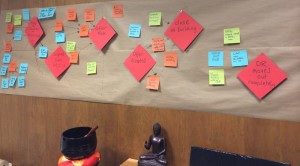 A timeline of events and tasks runs across the wall of Sakula’s temporary office in Southeast Portland.

Even with that lesson as background, it’s been difficult for Sakula and others within the community to reshape their perceptions of what it means to ask for and receive money. She still has a hard time speaking of fundraising as a Portland Friends of the Dhamma activity. Yet a fundraising campaign that reaches into the greater Buddhist community is just what Portland Friends of the Dhamma has undertaken, to get combined monthly pledges of least $4,000 a month, to purchase a new home.

Another more recent lesson came from Sakula’s spiritual advisor and mentor, Luang Por Pasanno, abbot of Abhayagiri. In April, a group from Friends of the Dhamma made the 13-hour drive to Abhayagiri to consult with Pasanno about the wisdom of wading into property ownership, and what it would take to get there.

Pasanno put the group at ease about moving into a “fundraising mindset,” Sakula said, adding that he offered to travel to Portland in June to kick things off.

“After 13 years of existence, Portland Friends of the Dhamma would have its very first fundraiser, with the blessings and presence of our spiritual advisor!” she said.

For her own part, Sakula at first saw the closing of the Methodist church as the opportunity to retire, and as she said, “to make my art and play with my grandkids.”

After all, she had accomplished her goal of bringing Abhayagiri monastics to the Northwest with the establishing of Pacific Hermitage, a small monastery on the Columbia River. Her work, she said, was done.

But after meeting with Luang Por Pasanno, Sakula reconsidered. “If there are enough people who find this worthy of support,” she said, “I will offer my support.”

The support does seem to be growing. As of Nov. 1, $3,000 in monthly contributions have been pledged. And, if all goes smoothly, Portland Friends of the Dhamma will close the purchase of its new home sometime in the spring.

Eventually the name over the door will change, and the black robes of Soto Zen will give way to Theravadin ochre robes.

By then the building at 2514 SE Madison St., which began in 1915 as a Mormon meetinghouse, will be 99 years old. It will have been owned by two different Mormon congregations, at least two chapters of Veterans of Foreign Wars, and two Buddhist communities. It has been an Odd Fellows lodge and an America Legion hall.

It has been a gathering place for countless renters—spiritual and secular—who have used its inviting and inspiring spaces.

And now, it will be home for Portland Friends of the Dhamma.

0
SHARES
Share
Posted Under: 2013, Sangha News, Winter
About the Author: Paul Gerhards
Paul Gerhards is secretary of Northwest Dharma Association, a past vice president and member of the board of Portland Friends of the Dhamma, and author of “Mapping the Dharma: A Concise Guide to the Middle Way of the Buddha.”