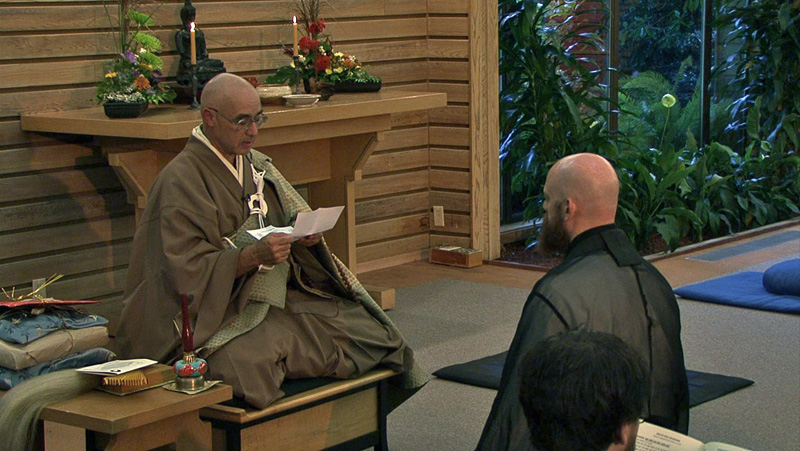 In September Zen teacher Eshu Martin, leader of Zenwest, was affirmed as an Osho (temple priest), and a Zenji (dharma teacher), in the Hakuin Rinzai Zen tradition.

With this step taken, the new Osho and the Zenwest sangha are now pushing forward an important project: developing a residential training hermitage on the Zenwest property in the town of Sooke, which is about 20 minutes outside Victoria. That property, known as Kokizan-ji or Red Flag Mountain Temple, is to include several cabins to support residential practice. 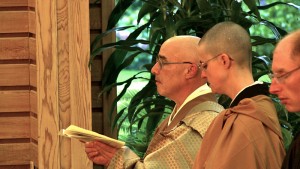 Martin was affirmed as the abbot of the Zenwest Buddhist Society (formerly the Victoria Zen Centre), in 2005. He has been training with Genjo Marinello since 2012. Here’s a link to a story about Martin’s online dharma teaching.

The Osho ceremony took place on Sept. 28 at the Interfaith Chapel, a handsome building set in a wonderful garden on the University of Victoria campus. About 80 people attended, many from the 90-member Zenwest sangha.

Visitors included Rev. Kojun Hull and Rev. Daitetsu Hull of Seattle, as well as Rev. Henri Lock of the United Church of Canada, and Rev. Lyle McKenzie of the Evangelical Lutheran Church in Canada. Both are University of Victoria chaplains.

Marinello led Martin and the assembly to embrace repentance, the three treasures (Buddha, dharma and sangha), the 10 precepts, the Rinzai/Hakuin lineage, and the four bodhisattva vows.

About the ceremony, Martin said:

“The thing that stood out most to me was the depth and breadth of support that was represented. As I mentioned in my talk, there were times along my own path of practice when I have felt very much alone. It was striking to me to see the faces of so many who have supported me all along the way.” 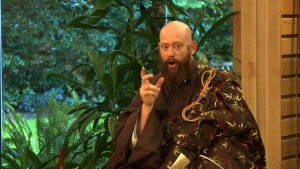 “Eyes down, just drumming, or just sitting, I wasn’t aware of a lot of detail in the ceremony, but I felt the warmth of the friends and family members present and their wholehearted support of Eshu.”

As an Osho, or acknowledged temple priest, Martin will have the authority to give dharma talks, do one-on-one dharma interviews, and ordain priests-in-training.

“I have already been acting as Osho for several years, with all of the duties and responsibilities involved. The most significant thing to me about being formally recognized has to do with relationship. Since I left Rinzai-ji, other Zen and Buddhist communities haven’t really been sure what to do with me, or how the Zenwest Sangha fits in the world of Western dharma practice generally; though our form and practice is solid and established.

The Osho ceremony formalized a connection between myself and Genjo Osho, and in a way grafts me, and therefore Zenwest, back onto the institutional tree. My connection with Genjo Osho creates some stability in the perspective of other lineages, and allows me and our s`angha to be a part of a much-larger family as well as part of the conversation about how Zen and Buddhadharma is manifesting and developing in the West.” 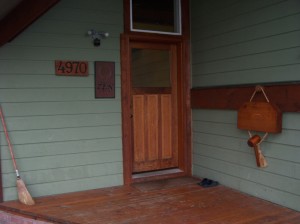 The front door of Kokizan–ji, which doubles as residence for Eshu Martin and family.

As the reader can see in the photos, Eshu received two beautiful new robes, crafted by Rev. Doshu Rogers of Zenwest. The coat piece is called koromo. The over-the-shoulder robe with tassels is called kesa.

An Osho wears the brown robe and dress kesa in formal ceremonies. In the Rinzai tradition, an Osho’s everyday robe is dark blue. The rakusu is beige. Black is worn on pilgrimage or while traveling.

As well as the titles Zenji and Osho, Martin also received a new name during the ceremony: Kosen, or Red Mountain Hermit.

“I’d prefer that people just continue to call me Eshu. There are now a lot more options available: Kosen, Kosen Osho, Eshu Osho, or just Osho (that’s like calling a catholic priest father). I’ll even respond to “Hey you!” If you were to introduce me in a formal situation, it would be “Kosen Eshu, Osho.”  Zenji is rarely used. It’s kind of like the term Sensei, used in martial arts.”

Kokizan-ji, Red-Flag Mountain Temple, is the name of the Zenwest Zendo in Sooke. The hill behind the zendo is called Red Flag Mountain. Working together, Marinello and Martin came up with the name Kosen, meaning “Red Mountain hermit.” 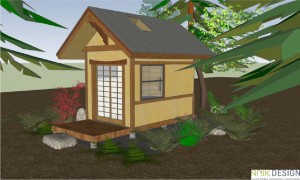 Construction of the first of these hermitage cottages will start in 2014.

Construction is to start in 2014 for the first of three or four hermitage cabins planned for the Zenwest property, now that $5,000 (Canadian) for the first cabin has been raised.

Potential sites on Red Flag Mountain are limited, but several have been identified, and site-clearing is underway by member volunteers.

The cabins were designed by Ananda Lazare, who runs the Victoria office of Anik Design, and construction will be overseen by sangha member Kokai Brent Cann. Each 8-foot by 12-foot cabin will sleep two. They will provide living space for participants in the new Zenwest Monastic Training Programme, slated to begin in early 2014.

The hermitages are designed to be simple, beautiful, and also moveable. Should we relocate to another property, these buildings will go with us. 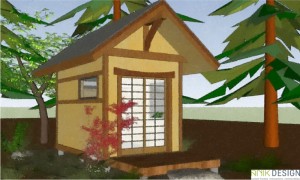 The hermitages will be simple and compact, without toilets or kitchens.

Zenwest’s current Sooke location is in a rented house. The space serves as home for Martin, his wife Niki, and their children Kigen and Maggie, as well as containing the Zendo and an interview room. Although the layout suits Zenwest purposes, it is not a large house, and is especially cramped when there is a student in residence. Moving to a larger space, however, is more than the sangha can afford at this time.

The landlord has been kindly agreeable to all these plans.

0
SHARES
Share
Posted Under: 2013, Dharma In Canada, Winter
About the Author: Sonja deWit
Sonja deWit is a playwright and novelist who has been practicing Rinzai Zen as a member of Zenwest Buddhist Society for five years. DeWit also plays cello with the Sooke Philharmonic Orchestra.