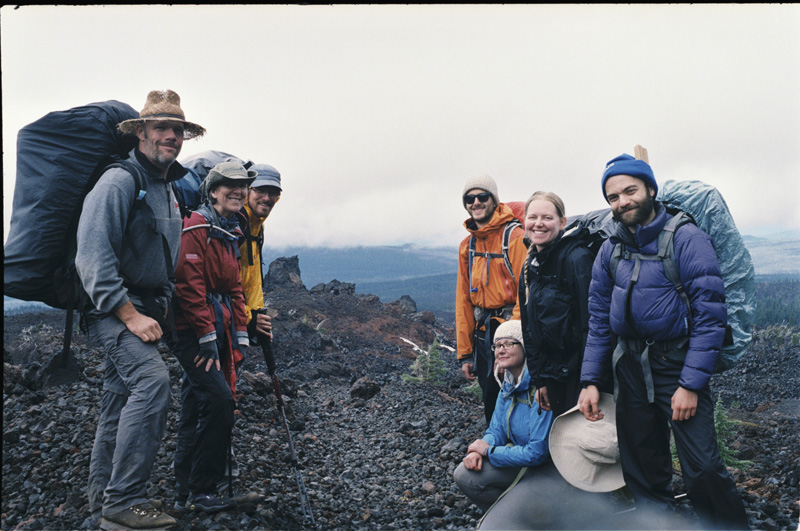 In the almost-black of early morning I was walking through a dark forest, rhythmically ringing a small bell.  I was searching for a tent, but I didn’t know where it was.  Below me mist was suspended in the pre-dawn grey over Demarus Lake, and as I stepped over yet another crumbled log the barren, littered, understory of the forest felt trackless and dreamlike.

As I walked forward each sounding of the bell died in the darkness, barely penetrating the fog.  I still didn’t know where the tent was.  So it seemed there was nothing to do but just keep walking, gently waking up people, waking up the whole world.

This was the 10th day of our two- week backpacking meditation retreat this fall, for our group of eight in the Three Sisters Wilderness in the Cascade Mountains of central Oregon.

For over a decade I’ve been leading wilderness backpacking Zen meditation retreats through the Red Cedar Zen Community, my local group in Bellingham, Wash.  Unusual in their format and not at all traditional within the Soto Zen lineage I practice in, these retreats have however been an important setting for enriching the meditation practice of many committed Zen practitioners, and others coming from other perspectives, who have hiked beside me through all these years in the mountains of the Pacific Northwest.

For Buddhist practice in North America to become fully grounded on this continent, I have come more and more to believe that Buddhist practitioners must engage directly with the place we live in, and must also have their practice emphasize this landscape as sacred.

The design of this retreat, circumambulating around three snow-capped volcanoes, was centered on a study of the three treasures of Buddhism:  Buddha, dharma, and sangha.  Most schools of Buddhism include a “taking of refuge” ceremony, where the practitioner formally declares his or her affiliation and identification with these fundamental considerations of the teachings.

On this journey we contemplated these from their widest connotations:  Buddha as universal essence or unexplainable wildness, dharma as governing principles or ethical imperatives, and sangha as myriad connectedness or the community of all beings.

Throughout, the three mountains loomed over us like gravitational presences to our thoughts, living entities reminding us of these three contemplations.  That they are known to climbers respectively as Hope, Faith, and Charity, for their relative difficulty of ascending, added yet another layer to our discussions. 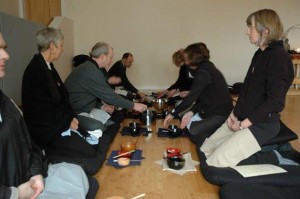 A formal oryoki-style meal during a recent retreat with the Red Cedar Zen Community, at their meditation hall in Bellingham, Wash.

Although this is certainly one of Oregon’s most popular hiking destinations, traveling with this entwined symbolism for our journey began to engender the feeling that we were perhaps exploring a new and undiscovered sacred mountain landscape, similar to the ancient pilgrimage routes of Asia, but right here at home.

A week before, on the other side of the mountains, had been our first of three layover days, our “Buddha Day.”  On a ridge over Eileen Lake each person had been set out at their own special spot for a 24-hour solo experience.

Each spot, discovered just the day before during a scouting excursion, had gained a name, each a micro-sacred zone such as “Raven’s Roost,” “Mandala Meadow,” “Red Tail’s Aerie,” and “Han Shan’s Summit.” But although each was set well away from the prying curiosity of any occasional passing backpacker, we discovered that our secret hidden places had not escaped detection that night by the local residents.

Early on the solo morning, amid meditation, each person’s private refuge had received a thundering and snorting visit from a particular rutting mule deer buck, whose ridge we were obviously occupying.

Our days continued on, through varied environments and weather.  Each day began with an early morning wake-up by a member of the group, who that day became our trail leader.  After morning group meditation, chanting, and breakfast in huddled sleeping bags, we packed and started on the trail.  But it was the hiking, conducted in silence, which became the heart of our meditation practice.

As we stepped into the wilderness our group coalesced, bringing a special intimacy to this Zen retreat.  As we hiked each day, we maintained a simple protocol to keep everyone together and safe on the trail while maintaining silence.  We ate our lunches communally, with formal chanting and in silence, at trailside.  In the evenings  when we set up camp, we broke silence and shared an informal dinner, until evening meditation and bed. 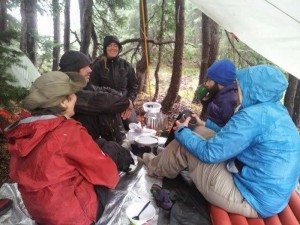 Leaving Eileen Lake and coming through the Obsidian Falls area, where the ground is littered with shards of the black volcanic glass, we were beset by an icy rainstorm.  The season suddenly seemed to be shifting.

That evening our zazen (seated meditation) practice looked like a silent sleeping bag slumber party, under a wet sagging tarp.  Living outside in the wilderness was giving us a full appreciation for one of Buddhism’s core truths – everything changes.

The following day we hiked through massive lava fields, a jumbled zone of jagged rocks, as alien a landscape as might be found anywhere on earth.  As we reached the top of Opidildock Pass the clouds suddenly parted, revealing for a few moments a mystic visage of North Sister, one of the three mountains, high above us in an enchanted fog, dusted by swirling snow.

The next day at South Mathieu Lake we paused for our second layover or “dharma” day, to discuss the ethics of the human/nature intersection. While we shared  we laid out all our gear in the sun, for a thorough drying.

One of our biggest lessons from the wilderness, wrapped in images of life and death, came from making our way through last year’s massive Pole Creek fire area.  Passing over the crest we immediately left behind a moist forest of firs, and entered a dry landscape of pines ravaged by bark beetles.  Stopping at the trailside we took some time to examine our new surroundings.

Long years of extreme fire suppression have inadvertently crafted the forests of the western United States into an alarming density of growth.  Only recently has fire become appreciated for the positive role it plays in maintaining healthy forest ecosystems, and in thinning the forest against massive wildfire.

But the realization has seemingly come too late, and now the specter of global warming has added another troubling dimension to the situation.  With the forest overloaded with young thin pines, and less cold weather each winter to kill off infestations, bark beetles have ravaged much of the dry forests of the West. 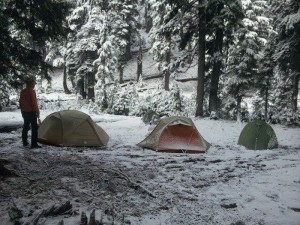 As we continued, half the standing trees seemed to be dead.  Everywhere the ground was littered with fallen chunks of pine bark showing the worm-like galleries of nesting bark beetles, which had feasted on the thin living cambium layer beneath.

Soon we entered the burn itself.  The fire had hopscotched around, leaving some areas untouched or only lightly damaged.  But as we went on the devastation grew greater.  In many places the entire forest had been burnt from the tree tops to the ground, and the thin volcanic soils had been laid bare to erosion.  The heat had been intense enough to even spall huge flakes off  boulders.

Soon we were glad we had hauled extra water from South Mathieu Lake; each stream we encountered had gone dry.  With no vegetation left there was nothing to catch the rain and help it seep into the ground.  For most of three days we traveled through an eerie desolation of blackened trees and barren skies.  But all around sprigs of new lupine, sprung from latent seeds and draped with this year’s new seed pods, showed that life was vibrantly continuing on.

Finally at Demarus Lake we packed for the trail.  But before leaving we headed out to an escarpment overlooking the far-off landscape of eastern Oregon.  Lighting a candle and incense, and ringing the bell, we all performed prostrations to the immensity of it all and chanted a series of chants, well wishes and prayers for the betterment of all beings. We chanted the words of the Metta Sutta, “suffusing love over the entire world, above, below, and all around without limit.”

That night it snowed again, as it had started to do increasingly over the last couple of days.  Winter was coming early to the mountains, and we were caught out in it, down to the last of our food and fuel, wearing everything we had brought and drying wet items inside our sleeping bags.

In the morning camp was buried in white.  But our final day looked promising, with patches of blue drifting in and out of the clouds.  Over the high divide and into Moraine Lake basin we trudged through six fresh inches of powder, following our way only by sixth sense.  After so many days of walking it seemed we had penetrated the mind of the trail and could sense where it was going, even if we couldn’t see it.

South Sister and Broken Top hovered amid the wrecked clouds, over the glistening bowl of snow and the ringing blue lake below.  It was an altogether fitting final day for our long journey.  We descended finally towards our cars, restaurant food, soft beds, beer, and a warm lodge.

But almost at the trailhead one member grabbed at the wilderness area boundary sign. “I don’t want to leave,” he said.

He was speaking for us all.  But it was alright. We were part of the wilderness now.

0
SHARES
Share
Posted Under: 2013, Sangha News, Winter
About the Author: Bob Penny
Bob Penny first encountered Zen Buddhism in 1979 and since 1991 has been a student of Zoketsu Norman Fischer. Bob has a combined BFA in Music, Art, and Creative Writing and an MS in Environmental Education. He is currently working with Norman towards the title of Lay Entrusted Teacher. Bob lives on a small farm just north of Bellingham, Washington and, in addition to leading Zen backpacking retreats, he works as a residential remodeling contractor, primarily on older homes.