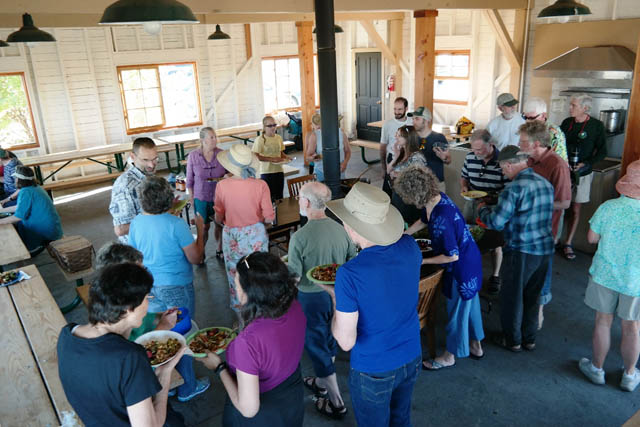 Social gatherings, such as this 2015 picnic, are part of the glue that keeps the Port Townsend Sangha connected.
Photos by: Stacy Fawell, others

I sit comfortably on my blue padded chair, bare feet resting on a mat, hands placed in my lap, eyes closed, head bowed slightly. Silence prevails except for the sound of an occasional cough or a late-comer slipping in at the back. A large statue of the Buddha placed on a piano bench is surrounded by flowers, with the dana bowl near its feet. 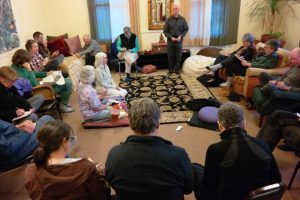 In the early years people gathered in living rooms.

We persevere as a small Buddhist vipassana meditation group, meeting at the Friends Meeting House in Port Townsend, Washington. As a small organization with no teacher we face a constant challenge regarding leadership and continued existence.

Here’s the crux of it: Port Townsend Sangha no longer has a guiding committee. The original members and their successors found themselves in the difficult position of trying to guide the group while receiving complaints about how they were doing it, yet having no one volunteer to join them. After several years of struggle the sangha has formed into three separate groups linked by a sense of community, as well as by a website open to all.

A core group of about 12 meets regularly on Wednesday evenings for a 45-minute sit, followed by a 45-minute discussion on a topic usually from vipassana tradition. Another group plans, promotes and presents a monthly full day of meditation practice, often augmented by teachings. A third committee puts together twice-yearly non-residential weekend retreats, with well-known teachers in the vipassana tradition as presenters. 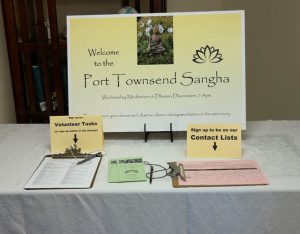 At one time guidance for all three components came from a guiding committee made up of members committing to serve and rotate every two years. But many of those members moved away to other practices, or formed study groups to better meet their needs.

As a small sangha without a teacher and in a vacuum of leadership, we face the challenge of keeping our sangha alive. I doubt we are alone with this problem.

I focus on my breathing to steady and quiet my mind. Before long I notice “thinking” creeping back in. This time there is concern. I love this little group of 12 who surround me in silence. They seem confident that this opportunity for healing and growth will be there for as long as they need it. I worry it is not sustainable.

Many of the residents of Port Townsend are people who moved to the waterfront Victorian town from big cities, out of a desire to slow down, to focus on their surroundings, to immerse themselves in nature, and to create. 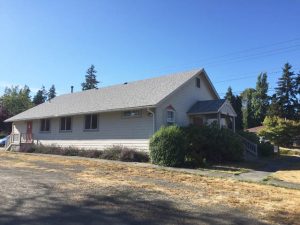 The group meets at the Port Townsend Friends Meeting house, operated by a Quaker fellowship.

Many of them are artists and writers, and many also brought with them the study and practice of Buddhism from various traditions, including Zen, Theravada, Tibetan.

The Port Townsend Sangha began 17 years ago when Jim and Adrienne Oliver invited a small group of Buddhist practitioners to practice with them in their home. The Olivers provided for the budding sangha the space, the leadership and the tea.

After several years the group outgrew the home setting and wanted to expand by offering the practice of vipassana meditation to the public. The group moved to the Madrona Institute, which provided a quiet, clean, space.

A guiding committee of five formed to provide leadership. The group grew to a mailing list of more than 200. Sui Oakland took over developing and managing an ever-more detailed website. The sangha blossomed and offered practice support to many people. 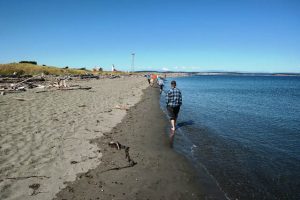 A sangha member walks after the picnic. Port Townsend is known for its artists, its beaches, and the surrounding waters of the Salish Sea.

My worry returns. How can we survive with no-one, not even a committee, in charge? Who will ring the bell next week to begin and end the sit? the week after? Who will lead the discussion? Will we have one? Who will send out the email reminder? Who will put the names of new people on the email list? Will we have enough dana tonight to pay the rent? When is it time to let go?

These are the questions that loom as we limp along. But do they loom? Some are more comfortable than others with this uncertainty. An unofficial group of three meets occasionally and shares by email to keep the Wednesday sits going. Oakland transferred the administration of the website to a volunteer who also acts as treasurer. Several others volunteer to open and close the Friends Meeting House, and to set up.

As I relax, I become aware of the energy in the room, the breathing of others, their presence. Ellen Ostern across from me, the bringer of love and energy to the group, John Wobleski, reliable, bringing a down-to-earth calm to the group…. I notice my wandering mind and return it to my breathing. Ah, impermanence, relax into it. Let go of the need to control this process. Smile. Return to the breath.

0
SHARES
Share
Posted Under: 2017, Fall, Sangha News
About the Author: Jean Akin
Jean Akin began meditating in 1985, but focused on vipassana practice in 2000, after attending a 10-day retreat in Thailand taught by S.N. Goenka. For years she was a member of Portland Insight Meditation Center, before moving to Port Townsend in 2011 and joining the group there.