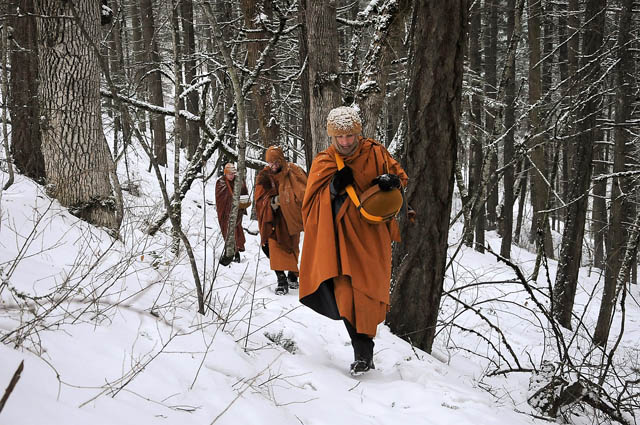 The monks walk alms rounds every morning to receive food for their daily meal and to connect with the community, sometimes through heavy snow. Ajahn Sudanto, Tan Saddhammo and Tan Kondañño.
Photos by: Will Floor, JFOTO.com , Noah Puggarana, Ajahn Sudanto

What are the odds that a Buddhist monastery could put down roots in a small rural Washington town and actually flourish there? That’s what has happened in White Salmon, Washington, a town of about 2,500 people.

The Pacific Hermitage, which includes a house and guest house, is located on 10 acres of forest near White Salmon, Wash.

Just seven years after its founding Pacific Hermitage is home to sometimes two or three monks, and has brought many traditional Buddhist practices to the region.

On Sept. 17 people gathered from around the region for the annual Pah Bah, a traditional alms-giving ceremony that attracts the largest annual share of monetary donations for the hermitage. Pah Bahs at Pacific Hermitage are true multi-cultural events, with Thai, Vietnamese and other languages spoken almost as often as English.

This year the ceremony highlighted funding to build a kuti (meditation hut) for the abbot. The new abbot’s kuti will be secluded, and will include a walking meditation path protected from inclement weather. 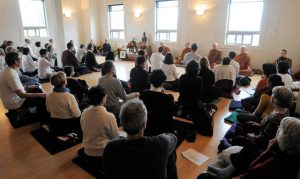 Community also has been fostered other ways. Up to 40 people attend weekly meditation and Dhamma reflections at Yoga Samadhi in downtown White Salmon, a town east of Portland on the Columbia River. The monks also lead half-days of meditation there every month, providing a slightly longer time to meditate and to listen to Dhamma reflections.

A core local group now actively practices in the Thai forest tradition, even traveling to other monasteries for longer retreats. This spring Ajahn Sudanto accompanied 23 people from the local and Portland/Vancouver areas to a retreat at Birken Forest Monastery near Kamloops, B.C. Last November several also went to a retreat at Abhayagiri Monastery in California. 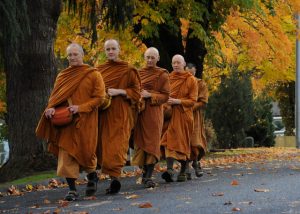 Several times a year community work parties at the hermitage offer opportunities to help the monks by weeding, planting or stacking wood for the winter, while volunteers develop friendships and enjoy a potluck meal.

Most people in White Salmon now at least know there are Buddhist monks in the area. The monks walk alms rounds through town every morning, receiving food for their meal and connecting with the local community, making White Salmon residents familiar with a practice that is quite rare in the United States. This video gives a sense of monastic life at Pacific Hermitage.

While the monks won’t initiate contact, they are visible and make themselves available for questions. Several local families have come to know the monks in this way and have developed deep connections with them. These neighbors now offer adequate alms food to feed the monks Monday through Friday, and the hope is that even more neighbors will join them. 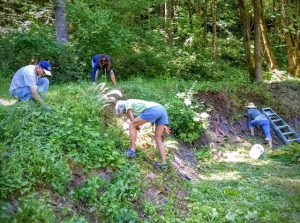 Friends help with hermitage yardwork at one of several “garden parties” each year, which include work, tea, and Dhamma discussions with the monks.

On weekends other supporters offer meals at the hermitage, many driving over an hour or so from Portland or Vancouver to do so.

When the original three monks took up residence, virtually no one in town knew who they were or what they were doing there. Local people knew little about Theravada Buddhism, the Thai forest tradition or the Ajahn Chah lineage. (Ajahn is Thai for teacher.)

The hermitage, a branch of Abhayagiri Monastery, first settled on rented property a few miles outside of White Salmon. Within a year the hermitage moved to five acres of wooded land purchased by lay supporters. Three years later five adjacent acres were purchased, to further protect the seclusion and quiet of the hermitage.

All during this time a solid local Sangha was developing, and the hermitage was receiving regional and international support.

This brief history of Pacific Hermitage is perhaps more surprising when you consider that these monks live much as the Buddha and his early disciples did. Following the Buddha’s monastic code, the monks don’t grow, purchase, cook, or store food for their daily meal. They don’t drive. They cannot handle or use money. They can’t even mow the lawn or pick berries in the woods, and they have no resident lay stewards to help with these things. 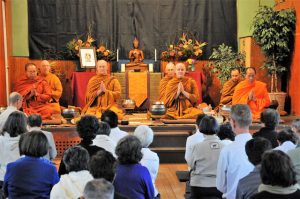 Honored guests join Pacific Hermitage monks chanting in Pali at the Pah Bah. The event, in White Salmon, helps to support the monastery.

The Pacific Hermitage monks are completely reliant on local and broader lay community support. Some of that support is needed daily. The monks’ one daily meal must come from food offered to them that same morning.

Since monks cannot handle money, a lay board of stewards manages all hermitage financial matters. Sanghata is that board for the hermitage.

Pacific Hermitage retains strong ties with Portland Friends of the Dhamma, with monthly visits to Portland to lead meditation and to give Dhamma talks. Friends of the Dhamma is the lay organization that requested a monastic presence from this tradition to be near its community, and that then organized the effort that resulted in the Pacific Hermitage. 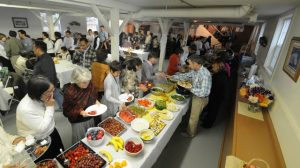 Pah Bahs include enjoying good food and meeting friends. Locals as well as people from as far as Thailand, gather to practice generosity, to bring support to the hermitage, and to share in the Dhamma.

Other distinguished visitors have included: Ajahn Sucitto, Ajahn Amaro, Ajahn Viradhammo, Ajahn Geoff (Thanissaro), Ajahn Metta, Ajahn Siripanyo, the nuns of Aloka Vihara, Bhante Rahula, and noted lay teacher and author, Phillip Moffitt. The schedule for 2018 isn’t firmed up yet, but Bhante Rahula returns in July for a visit and to lead a local retreat.

The Pacific Hermitage is meant to be a place where Thai forest tradition monks can practice quietly and simply, away from even the activities of a larger monastery, living much as monks do in Thailand. Lay supporters from around the world have been inspired by this vision and by the dedication of its monastics to practice.

Individuals from Thailand, Burma, Sri Lanka and other Southeast Asian countries have played a significant role in encouraging support for the hermitage and offering monetary donations to purchase the land and provide on-going support.