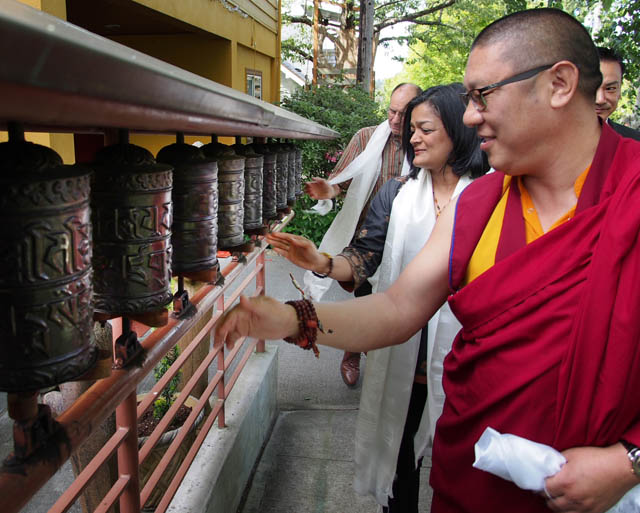 U.S. Representative Pramila Jayapal made a rare visit to Seattle’s Sakya Monastery of Tibetan Buddhism in June, responding to an invitation from the local Tibetan community. 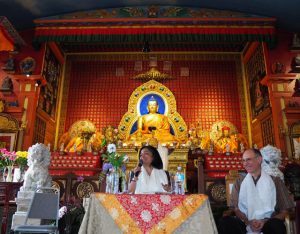 Congresswoman Jayapal addressing the Seattle Tibetan community with her husband Steve Williamson by her side.

Her district encompasses most of Seattle as well as some outlying parts of King County, which includes areas where most local Tibetans reside. She was invited by the Tibetan Association of Washington, which represents Tibetans in the Puget Sound area.

“Congresswoman Jayapal’s visit is an honor for our community, and it was a great opportunity to hear first-hand how the United States government views the issue of Tibet,” said Jampa Jorkhang, association president.

The Tibetans’ invitation reflects a shift in how Tibetans are working for freedom for their people in Tibet. While activists previously emphasized demonstrations and mass protests, those have produced little and seem ineffective for the most part. The new outreach to local members of Congress represents maturation, a growing understanding of the effectiveness of political work.

“I believe that if we really want to move the needle on the Tibet issue, we need to reach out to our representatives in the government and lobby them to pressure China,” Jorkhang said. “Protesting on the streets is a symbolic show of solidarity, but in recent times it has more of a flash-mob effect, where we shout our guts out and then the energy fades until the next time we protest. 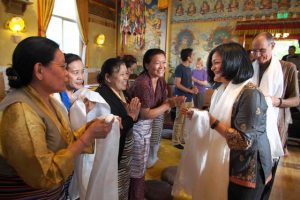 Members of Seattle Tibetan community welcoming Congresswoman Pramila Jayapal and Williamson, in the main shrine hall of the monastery.

“By inviting the congresswoman and hearing her speech,” he said, “My hope is that our community will have a better understanding of the effectiveness of sustained dialogue and diplomacy with China, via our elected leaders in the United States Congress.”

Tibetans invited Jayapal after she joined a bipartisan U.S. congressional delegation’s visit to Dharamsala, India, in May. This is where the Tibetan government-in-exile is headquartered, and also is home of His Holiness the Dalai Lama.

The delegation was led by House Minority Leader Nancy Pelosi (D), and by Representative Jim Sensenbrenner (R), the latter from Wisconsin’s 5th district. Jayapal and several other congressional members met with His Holiness the Dalai Lama and the leadership of the Tibetan Central Administration, as a way to draw the world’s attention to human rights issues in Tibet.

The delegation’s visit to Dharamsala was part of a larger visit to India, Nepal, Germany and Belgium, focusing on national security, the global economy, bilateral and multilateral relations, and human rights. 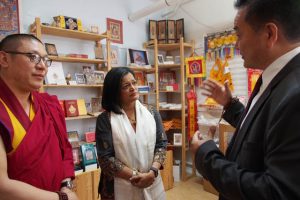 In Seattle, Congresswoman Jayapal and her husband Steve Williamson were given a tour of Sakya monastery by Abbot Khenpo Jampa Tenphel. She afterward said the visit was especially significant for Williamson, a practicing Buddhist.

At the event Jayapal talked briefly about her past, and about how her father sent her from India to the United States for college, when she was just 16 years old.

“I was supposed to be a doctor, a lawyer or an engineer, but instead I became a human rights activist and then a congresswoman,” she said.

Jayapal and her parents have lived on different continents since she arrived in the U.S.

“My parents still live in Bangalore, India and I live here, and because of our broken immigration system I’ve never been able to bring them here,” she said. “I am so grateful to them for the opportunities that I had, and that’s really why I have spent the last 25 years of my life fighting for other people to have opportunity.”

Most Tibetans can relate to her thinking, because they are first-generation immigrants who still have family members in India and Nepal. It is often a great struggle to get family members to the United States, and even when that is successful older parents have difficulty adapting to the U.S. due to issues with language, mobility, community, and other conditions. 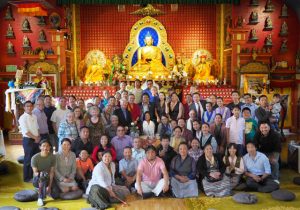 Congresswoman Jayapal with Seattle Tibetan community members, and Sakya Monastery members, in the main shrine hall of the monastery.

During her visit to Sakya the congresswoman discussed her trip, and the delegation’s meetings with leaders from NATO and the European Union.

“The purpose of the trip to Germany and Belgium was to say that we need some help to put together a strong international coalition that can fight for Tibetan human rights,” she said.

The Congresswoman was quick to add that she was not trying to criticize the Chinese people.

“I also understand the reality that there are some in the Chinese government who are continuing to repress and stop the Tibetan people from practicing their religion and their culture and that is happening not only in China but in Nepal as well,” she said.

Over the past couple of decades Tibetans in Nepal have faced increasing restrictions on gatherings for religious occasions as a result of strong pressure from the Chinese government. The congresswoman said the delegation met with the Nepalese prime minister, and expressed concerns.

“The Tibetan refugee population in Nepal has not been given registration papers to live in Nepal that would allow them to get jobs and own businesses,” she said. “We asked the government of Nepal to continue to uphold the rights of the Tibetan people to practice their culture and religion and celebrations.”

Demonstrating her savviness and understanding of the geopolitics of the region, the congresswoman said, “Nepal is in a difficult place obviously…with the big neighbor to the north and the big neighbor to the south and clearly they’re feeling some pressure there.” She added that she and her colleagues will continue to push the Nepali government to provide full rights and freedoms to the Tibetan people.

Congresswoman Jayapal also spoke about the delegation’s trip to Dharamsala, and meeting with the Dalai Lama.

“He was funny as he always is and he was hopeful as he always is,” she said. “What he said over and over again was that it’s not that people are pro-Tibet they’re pro- justice…because being for the rights of Tibetans is being for justice.”

It may seem odd to invite a member of Congress to meet at a monastery, given that the separation of church and state is a cornerstone of American democracy. But it is not such an unusual thing for Tibetans, who historically have been ruled by religious figures.

In an effort to move to a more democratic system, the Dalai Lama in 2011 retired from his political responsibilities, saying, “The rule by kings and religious figures is outdated.”

169
SHARES
Share
Posted Under: 2017, Compassionate Action, Fall
About the Author: Jamyang Dorjee
Jamyang Dorjee is a Tibetan Buddhist living in Bothell, Wash., with his wife and two children. He is a former president and board member of the Tibetan Association of Washington. He writes regularly for Northwest Dharma News.