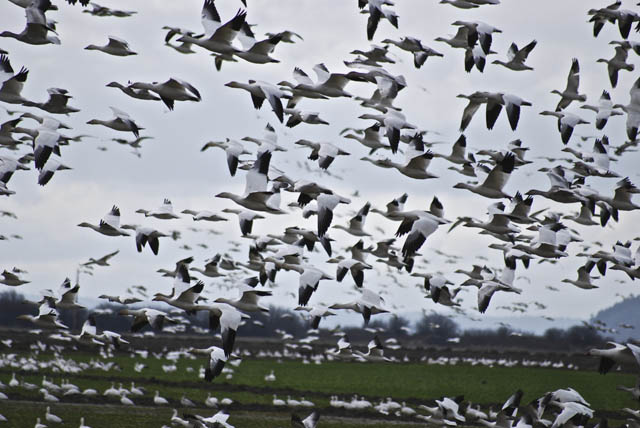 What is a Buddhist practitioner to do in the age of President Donald Trump? How does one respond in one’s practice to the environmental issues this raises?

Of course the Buddha way implicitly invokes a different sense of our earth and our selves, and as such is the paradoxically deafening response of great silence. Nonetheless for many people this response, at least in the interim, may not be enough. What then are we to do?

In what follows I offer my personal reflections and experiences as the founder and co-director of the Seattle University EcoSangha. I do so with no sense whatsoever of universality. Practice in the age of Trump is a great koan, and true to the Way of Zen, we cannot outsource our struggle. 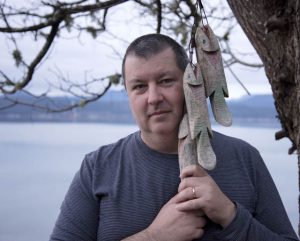 EcoSangha is a Seattle-based Zen community practicing in the Soto and Rinzai Zen traditions. It is led by Dr. Jason Wirth and Dr. Elizabeth Sikes, both Seattle University professors, and by Dr. Eddie Salazar, an administrator at the university.

The EcoSangha is devoted to the propagation of Buddhism as an inherently ecological perspective. The group focuses on finding answers to today’s urgent environmental challenges, most particularly our destruction of the Earth, through understanding the three poisons of greed, hatred and ignorance, as explained in Buddhism.

When Trump was elected, to the dismay of probably every member of our sangha, we were in shock. We soon held a healing ceremony. We dedicated our practice to those who have been and who will be damaged or destroyed by Trump and his values.

We chanted the “Disaster Averting Dharani” (Sho Sai Myo Kichijo Dharani), many times. We circumambulated the campus in walking meditation (kinhin). And we talked. A lot. We wondered about the appropriate role of compassionate anger. We vowed to protest, and we vowed most importantly to continue our practice of rooting out attitudes displayed by Trump, that we find within the dukkha-saturated human heart.

Trump came up several times in my subsequent Dharma talks, as each month of Trump’s administration brought plenty to talk about. Some sangha members told me that continued meditation on these challenges was helpful. Others stopped attending precisely for this reason. 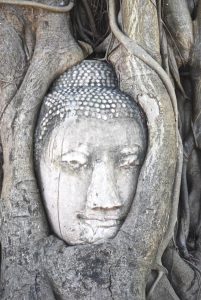 This Buddha, in Ayutthaya, Thailand, reflects the linking of Dharma and environment.

To my chagrin, some members told me that they did not practice Zen in order to contemplate Trump, and that I should desist any further mention of him. For my part I remember how easily Japanese Zen was co-opted by Japanese militarism during the War of the Pacific, and hence I resist such counsel. But I also know that I cannot speak for everyone.

I reflect on the EcoSangha’s response to what I would call something like Trump’s “War against the Earth.”

The initial months of Trump’s regime have accelerated the war against the Earth. Trump’s unilateral withdrawal from the Paris Climate Accord puts us in the company of Syria (currently mired in a civil war) and Nicaragua, which refused to sign because the accord was not radical enough. All of Trump’s environmental appointees have made their careers in the war against the Earth.

Buddhist practice, which stresses the dependent co-origination (pratītyasamutpāda) and interdependence of all beings, has always had an inherently ecological element. Given the unfolding planetary ecological crisis as well as its acceleration in the age of Trump, I have felt compelled to bring these elements to the forefront in my own ministry as a Sōtō Zen priest.

How could we even say that we aspire to mindfulness, to attentiveness to the now and here, if we refuse to see that right now and right here the Earth—our shared being after all—is in ecological turmoil? 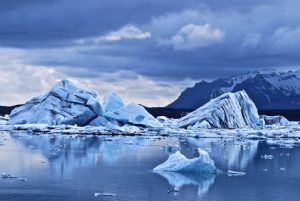 These ice bergs in Iceland reflect the status of the global climate.

Our intoxicated manner of taking, owning, hoarding—the Buddha’s three poisons now at the heart of a global crisis—demand endless unilateral expansion. We hardly know what to make of Zen Master Eihei Dōgen’s claim almost 800 years ago, in “Bodaisatta Shi Shōhō” (The Bodhisattva’s Four Methods of Guidance), that “Making a living and producing things can be nothing other than giving. To leave flowers to the wind, to leave birds to the seasons, are also acts of giving.”

The problems are so profound that they will require multi-generational patience, and a profound re-orientation of our manner of living and being. This will be hard because we live in a global world where every opportunity to make a quick buck is handsomely recompensed.

In such a dire context, the Seattle University EcoSangha does not regard the ecological dimension of practice as optional. It is now at the heart of the Buddha Way. The climate is like karma itself: it is the causes of conditions of our shared being.

Our website contains multiple links to environmental organizations. We also walk our talk, and earlier in 2017 sangha members volunteered to help with an Earth Day cleanup project.

Just as bad practice contributes to bad karma, our bad ecological practices contribute to an increasingly destructive climate. It was once easy to imagine the climate was a set of more-or-less stable background conditions. But our actions have brought climate conditions to the fore, showing us who we are by increasingly refusing to accommodate our actions. 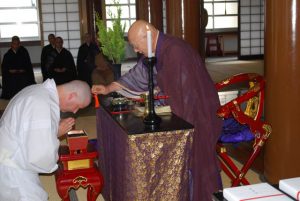 Zen is not simply about personal awakening. It is also about awakening the corporations, institutions, and systems that comprise who we are. They too are part of our climate, and belong to the challenges of karma.

It is in this sense, made all the more acute by the fact that we have our home at a Jesuit university, that we applaud the first Jesuit pope, Francis, in his beautiful encyclical, Laudato Si. Here he calls for an “ecological conversion,” and insists that religion can no longer be a merely personal matter. He said it has to take on the systems that comprise us, in order to respond to the Earth that sustains each and every one of us.

Of course the idea of an EcoSangha is not new. Others have adopted this and similar names, and larges swaths of the Buddhist world are re-awakening to Earth practice. This follows the Buddha’s own fabled refutation of the demon Mara, by reaching down and touching the Earth with his hand. 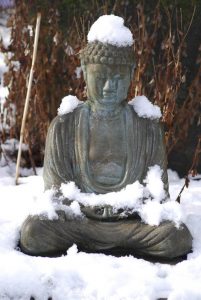 We founded EcoSangha in 2006 at Seattle University, and the name in part came from some wonderful conversations with my friend the Reverend Don Castro, a Jōdō Shin Buddhist priest at Seattle Betsuin (the Seattle Buddhist Church). Castro’s discussion of the nature and aspirations of an EcoSangha can be found on our webpage.

The great Zen poet Gary Snyder had already spoken of the “Great Earth Sangha” in his seminal 1974 book “Turtle Island.” (Indeed, as a sangha we endeavor to awaken to Turtle Island, a new version of the old Haudenosaunee or Iroquois Confederacy word describing an interdependent way of being part of the land we call North America.)

My own order, the Sōtō School of Zen, has come out with a major and quite beautiful ecological statement that echoes many of the ideas discussed here.

We imagine that we own the Earth, that it is our property and at our disposal. But the Earth is practicing a kind of eminent domain, teaching us once again that it is we who belong to the Earth. However one deals with the age of Trump, it affords us great insight into the folly and narcissism of our egos, and their ruination of our Great Self.

The Seattle University EcoSangha is open to the public. Please consult our webpage for more information on our practice.

The EcoSangha sits for meditation at 7:30 p.m. Thursday evenings in the narthex of the Chapel of St. Ignatius, on the Seattle University campus. We also offer several events, lectures, workshops, and an annual spring retreat.