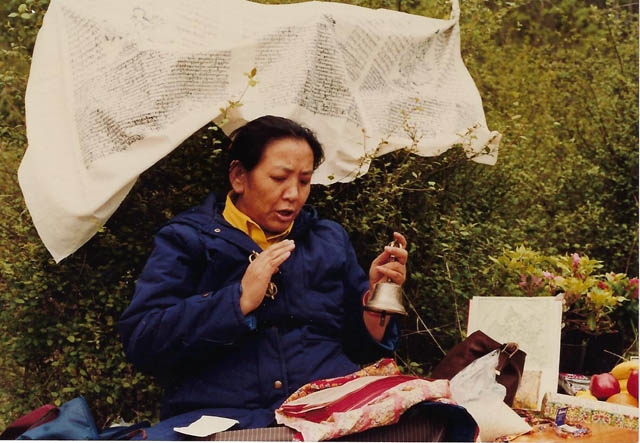 Jetsun Kushok in 1987 performing a ceremony to bless the land for the retreat center.
Photos by: Debbie Hilton, Anne Moore, Jeff Webster

Thirty years ago a female Buddhist teacher from one of Tibet’s most esteemed families sat in the grass on a San Juan Island mountainside, and performed a ceremony to bless the land. 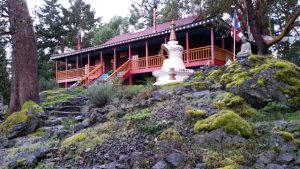 Rinpoche is best known among her students around the world as Jetsun Kushok. She is a fully accomplished lineage holder in the Sakya tradition of Tibetan Buddhism, and also operates a Dharma center in Vancouver, B.C.

Through her blessings and those of the Sakya lineage, Sakya Kachod Choling has become a sacred place for Buddhists and non-Buddhists. Many go on self-retreat there, or join group retreats under the direction of Jetsun Kushok or an affiliated lama.

The growing community includes students who travel to San Juan Island from around the world. Many locals also value the jewel Sakya Kachod Choling has become, whether or not they practice Buddhism. Growing numbers of people attend the Sunday meditation sessions and social hour, and donate time and energy as volunteers. 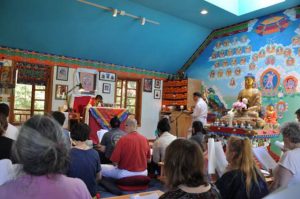 Students gathered in the shrine room for White Tara teachings in July 2017.

The retreat center and Sakya Society, the 501(c)(3) nonprofit corporation that manages the retreat center for Jetsun Kushok, are repairing and improving the facility as their way of celebrating the 30th anniversary of the blessing of the land.

The center’s top priority is to build more insulated retreat huts. Some retreatants, especially from countries where camping is not popular, seek the added warmth and protection of an insulated building. Additional huts also are required for next summer’s three-month Vajrayogini retreat. The center is raising funds to meet these needs.

Sakya Kachod Choling offers a variety of housing choices on its 20 acres of largely undeveloped land, including retreat rooms in the main building, a yurt, an insulated retreat hut, wall tents on platforms, and tent platforms where retreatants can set up their own camping tents or one of the center’s tents. 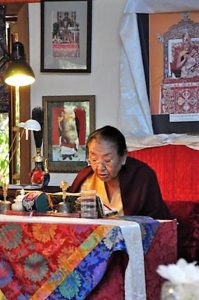 Jetsun Kushok in the shrine room in July 2017 during the White Tara teachings.

Other priorities include replacing steps, improving the roads, acquiring new storage buildings, improving the electrical system and lighting, and painting the buildings inside and out. Sakya Society has established an “anniversary fund,” to raise the $150,000 needed.

Already donors are responding, allowing the retreat center to replace and paint dry wall in the kitchen, and to install new light fixtures in the kitchen and the shrine room.

In October Khenpo Pema Wangdak, a Tibetan Sakya lama who serves on the Sakya Society Board of Directors, will teach at the center for about 10 days during his fourth visit.

During his visit Khenpo Pema Wangdak will give a public talk on “Exploring patience and its strength,” and will then direct a one-week mind-training retreat on patience.

The khenpo, who operates a center in New York City, is one of the Tibetan lamas sent to the United States in the early 1980s. His English is beautiful, he understands the Western way of thinking, and his retreats are always well attended. The retreat is serious, but the schedule is flexible. 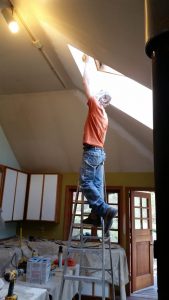 Dan Burton preparing to paint the kitchen in April 2017.

A teacher who knows how to surmount difficulty

The inspiration for all this comes from center founder Jetsun Kushok. Even though she was born in a palace in Tibet, Jetsun Kushok knows what it is like to struggle to care for her children, to make a living in a new country, and to keep up her meditation practices at the same time.

Rinpoche was born in 1938 into the Khon family, a Tibetan family believed to be descended from celestial beings. It has been said by other Tibetan masters, such as Khenpo Karthar Tharchin Rinpoche, that a person must be at least a first-level bodhisattva just to be born into the family.

Jetsun Kushok’s early training and spiritual practice was remarkable by Western standards. She completed her first retreat at age 10. At 11 her father sent her for six months of the year to teach and live among the nomads on the northern plains of Tibet.

At 16 Jetsun Kushok went into retreat for eight and one half months. At 17 she became the third woman in the history of Tibet to transmit the Lam Dre (the Path Including Its Result), the major teachings on the Buddhist path in the Sakya tradition. 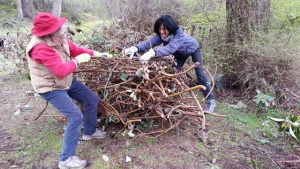 Her education and practice continued, with Jetsun Kushok receiving the same religious training as her brother His Holiness Sakya Trizin, who became the Sakya throne holder in 1952. This continued until the occupation of Tibet, in the late 1950s, forced her family to leave home and possessions for exile in India.

Jetsun Kushok eventually married a man from an equally respected Tibetan family, and in 1971 the couple moved to Canada. They have lived in Richmond, a suburb of Vancouver, British Columbia, since 1973.

British Columbia is home to Jetsun Kushok’s Canadian Dharma center, Sakya Tsechen Thubten Ling. From there Jetsun Kushok teaches in Vancouver and around the world, especially in Europe, Taiwan, Singapore, and her retreat center on San Juan Island. 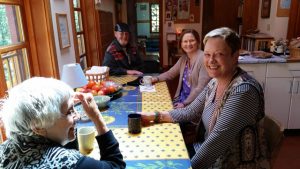 Jetsun Kushok performed the original 1987 land blessing ceremony on 10 acres of land on San Juan Island, which two students had purchased for the purpose of building a retreat place there. By 1988 supporters had added another 10 acres, and created Sakya Society. The next year Sakya Trizin dedicated the stupa, and then over a period of several years the main building was built. The retreat center was named Sakya Kachod Choling and opened in 1991, after completion of that building.

In 1993 a Tibetan artist arrived and for a year painted traditional symbols and images in the shrine room, and outside on the main building. His art includes a mural of Sakya lineage holders and Buddha images across one full wall, and paintings for a long-life shrine on a second wall.

In 1995 His Holiness Sakya Trizin bestowed the Lam Dre teachings and initiations to students who came to San Juan Island from all over the world. 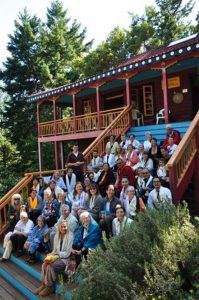 Group photo from the White Tara retreat program in July 2017.

Friday Harbor officials were kind enough to offer the high school buildings to accommodate the large groups. The officials even allowed students to sleep in the gyms, in sleeping bags they threw on the floor. This was only the second time that the Lam Dre teachings were offered in the United States.

Some of the students who attended the 1995 Lam Dre still speak of the island as a paradise. San Juan Island, with its still-untouched natural beauty and relative inaccessibility, provides the perfect setting for a retreat place.

Students meet the challenges of serving such a community with joy and enthusiasm. For more information call 360-378-4059 or email skc.retreat@gmail.com.

150
SHARES
Share
Posted Under: 2017, Fall, Sangha News
About the Author: Anne Moore
Anne Moore began her studies in the Sakya tradition of Tibetan Buddhism 17 years ago, after taking refuge two years earlier at Vien Giac Buddhist Temple in Oklahoma City. She was a litigation attorney and public defender in Oklahoma before moving to San Juan Island in 2016, to become retreat manager at Sakya Kachod Choling.