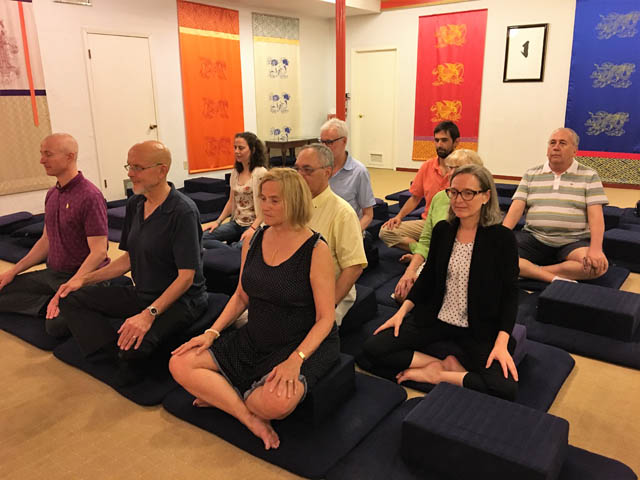 We knew it was coming. The specter of homelessness for The Vancouver Shambhala Center was just over the horizon. Our mission statement is to Wake Up! We weren’t caught sleepwalking.

Sensing an uncertain future we formed a group six months before we received the notice that our lease would not be renewed. The Vancouver, British Columbia building we were in, is now scheduled for demolition. 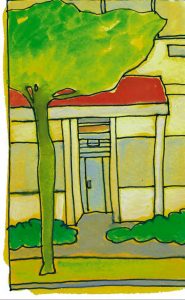 A watercolor of the new center by Louise Phillips.

We looked at options. Another lease elsewhere? Create small satellite centers? Share space with like-minded organizations or rent rooms in community centers, nomad-like, wandering from place to place? We decided to prioritize and settled on Mission Impossible: buying!

This seemed near-impossible because as you may know, Vancouver property values are among the highest of any city in the world. But we calculated if we could raise the down payment, mortgage payments would not be much more than leasing.

Urban realities like zoning, parking, location and the need to be near mass transit, all had to be factored in. We estimated it would take at least a million dollars, and at that we would be downsizing!

But then through a series of stumbling coincidences we found it, a 3,500-square-foot second-floor space that met all our requirements.

However the asking price was $1.95 million (Canadian). We would need an additional amount for renovations.

The Shambhala Community shook off “sticker shock,” accepted the realities of property costs in Vancouver, and determined to pull this off. 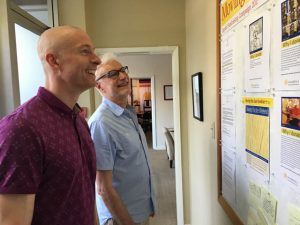 We formed a fund-raising committee, advised by a member whose profession was fund raising. The key, he said, was one-to-one contact.

Members of the committee chose people they would approach, from a list of names. It was not a hard sell. The Shambhala Center was important to people personally, and imagining not having it was unthinkable for many.

The Vancouver Shambhala Center was started 42 years ago by a small group of meditation students of Chogyam Trungpa Rinpoche, a well-known teacher of Tibetan Buddhism now succeeded by his son Sakyong Mipham Rinpoche. The center has been in its present location 40 years, and thousands of people have come through the doors for meditation instruction. 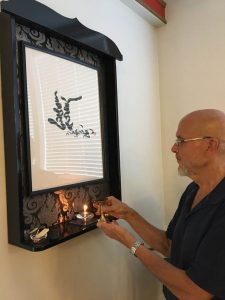 We offer a complete path of Buddhist teachings rooted in the Dzogchen tradition of Trungpa Rinpoche, the founder of Shambhala worldwide. At the same time we offer a spiritual community for people of any faith (Judaism, Christianity, Islam or other), or no religious affiliation, who seek practical instruction in applying meditation to everyday life, and who are interested in societal transformation.

At the moment we have secured a mortgage ($650,000 down payment) and have raised a very small part of the renovation funds. We now own a second-floor rectangular space in a business building. A park is half a block to the east, and a bustling section of town two blocks to the west.

The new location is quiet while near a large variety of goods and services. It is handicapped-accessible by elevator.

A large community space will be at one end of the new center , featuring a wall of glass looking out on the North Shore Mountains. The remaining area is high-ceilinged open space. An architect is drawing up plans.

The community space, two shrine rooms and kitchen are key parts of the plan, because an uplifting environment is a crucial element at Shambhala centers. Food, conversation and meditation are all important to the community. 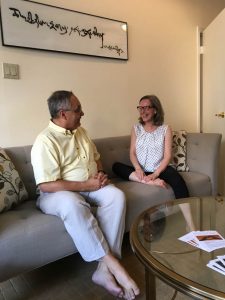 Paul Belserene and Maria Stella share a moment in the community room.

We are learning as we go. Estimated costs morph into reality, and for instance we underestimated the architect cost. Our estimate for renovations is an educated guess, so we will see as the process unfolds. Finding available contractors with the licenses for this kind of project, in the midst of an area-wide frenetic building boom, is another challenge.

In the near term we will be raising more money, and may have to complete renovations in stages.

One of the core tenets of Shambhala, informed by Buddhism, is that people are basically good! The Dharma view is that our innermost essence is buddha nature, (Tathagatagarbha).

This has manifested, in my experience within this “dream,” as I have watched people working things out.

It is not that those involved immediately agreed on everything. The process has had its messy moments. More often than not it took the form of respectful disagreement, genuinely listening to differences and having the flexibility of mind to compromise or change views.

The path of working with ourselves and each other is, in the end, the goal.

105
SHARES
Share
Posted Under: 2017, Dharma In Canada, Fall
About the Author: Jerry Chapman
Jerry Chapman has practiced Buddhdharma for 49 years, and has completed a Tibetan Buddhist three-year retreat. He co-founded the Juneau Shambhala Center in 1988, was director of practice and education at Gampo Abbey Monastery in Nova Scotia for six years, and was director of The Vancouver Shambhala Center from 2014 to 2017.