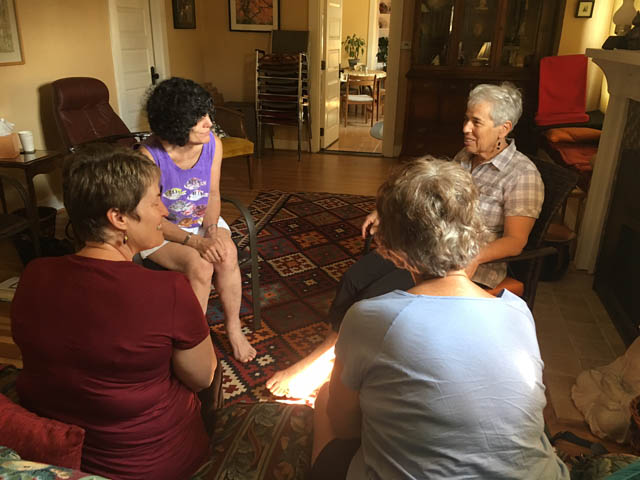 Portland’s Pine Street Sangha this fall will host its third Death Café, a collective exploration of death to help participants make the most of their lives. 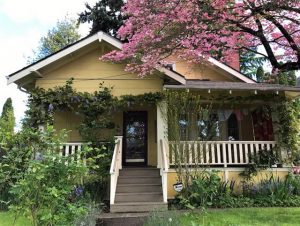 The homey atmosphere of the Portland center welcomes us to meditation and Dharma.

Pine Street Sangha is a small, innovative Buddhist sangha in the Montavilla neighborhood of Portland. Death Café is a participant-generated conversational format where people sit in small groups, typically with those they don’t know, to discuss whatever is on their minds about death.

The goal of the international, grassroots, all-volunteer Death Café movement is “to increase awareness of death to help people make the most of their (finite) lives.” Death Café is a good match for the approach to meditation practiced at Pine Street Sangha, where we allow whatever is on our mind to unfold in meditation.

Contemplation of death is a practice common to most Buddhist traditions. Our lives and sense of self are unstable and shifting and are, at times, quite difficult. Facing death puts us in close contact with this knowledge.

At the time of the Buddha people contemplated death by going to charnel grounds where corpses were left to decompose uncovered, but this is not viable now. Death Café better fits our cultural inclinations (and health department regulations). 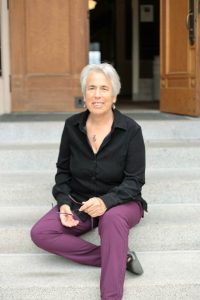 The impermanence of an individual life, and the value of living mindful of that fact, was underscored by the recent, sudden death of Death Café founder Jon Underwood, at the age of 44. Underwood, father to two young children, was a student of the Jamyang Buddhist Centre in London.

Since Underwood held the first Death Café in his home in 2011, the event format he developed has been replicated nearly 5,000 times, in more than 50 countries around the world.

Since then Portland-based PDX Death Café has organized 43 conversation events at libraries, restaurants, hospice programs, community centers, college reunions, even at a music festival. With nearly 2,500 people on the email notification list, the PDX Death Café community has been called the largest of its type in the world. (PDX is a reference to Portland International Airport.)

Participants experience the rare chance to “come as they are” to the topic of death, without being told how to fix anything. 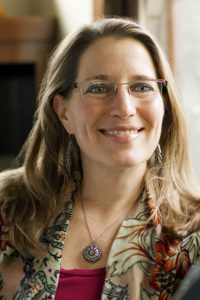 “There’s an art to providing a Death Café well,” Death Café founder Underwood told Pruett. “The egalitarian nature of it is unique. Death Café hosts should make the event safe without being controlling. The model is non-directive. We don’t have any answers around death and dying. We all just come to this with our questions.”

Similarly meditation at Pine Street Sangha is non-directive, and people new to the sangha often remark on how safe they feel in the space.

Feedback from Death Café participants touches on similar themes. One participant says she comes to the Death Café “because the conversation is important, life-affirming, validating, empowering, healing, and community building.”

Another says the best part of attending is, “Getting out of my head; meeting new people with rich thoughts and experiences. I am so grateful that you encouraged us to sit at a table full of strangers!” 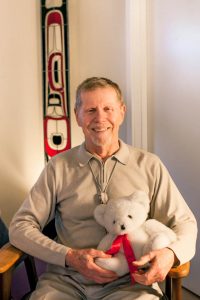 Pruett experienced the value of learning from others’ thoughts about death, from an experience at an early café. At that gathering the facilitator reflected back to the group, “As each of you shared why you came to the Death Café today, I noticed everyone used the word ‘fear’ in some form. Would we like to explore our fears related to death more specifically?” One woman, a longtime Buddhist practitioner who had contemplated this question frequently, offered to go first, Pruett said.

“I learned so much more about my fears through listening to hers,” Pruett said. “She was able to describe so well some of the concerns that for me were still inchoate. Other trepidations of hers, I realized, were actually not sources of anxiety for me.”

Tarbutton said he was attracted to the model because, unlike the conversations he had with patients as a hospice chaplain, most Death Café conversations are not driven by immediate need such as a sudden terminal diagnosis.

Instead talking about death can be normalized as part of the fabric of life, rather than focused on the end of life. In addition these conversations can provide an opportunity for older family members to address the subject of death with younger family members, who are sometimes unwilling to talk about end-of-life issues with their elders.

Feedback from Death Cafés held previously at Pine Street reflects a few attributes specific to the sangha experience. First, the many separate rooms and the home-like setting provides for small group discussion, with an intimacy and ease not always available in larger halls. In addition, with the space and facilitators steeped in meditative practice, the Pine Street Death Cafés seem uniquely comfortable with silence. 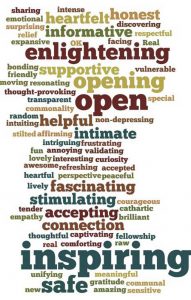 One participant praised how her facilitator “felt out the silences between comments.” Another said the format “allowed plenty of quiet time for people to process internally, then to share.”

As PDX Death Café nears its fifth anniversary of serving Portland, Pruett said, “I am always so moved by what we can hold in the space between us as humans, if we just give each other the chance.”

For Tarbutton, now 80 and retired from chaplaincy, holding PDX Death Café at the Pine Street Sangha provides an opportunity to use the end-of-life conversation facilitation skills he developed as a chaplain. The PDX Death Cafés extend into his retirement, the sense of meaning and purpose he experienced while working.

“Please join us at the Death Café or for a Sunday morning meditation,” said Nelly Kaufer, founder and lead teacher at the Pine Street Sangha. “Perhaps you’ll get a bit more trusting of the unpredictable nature of death and of your inner world.”

PDX Death Café was to host an event on Sunday, Sept. 24, and here’s a link for tickets.

34
SHARES
Share
Posted Under: 2017, Dharma Education, Fall
About the Author: Nelly Kaufer, Holly Pruett, Don Tarbutton
Nelly Kaufer is founder and lead teacher at the Pine Street Sangha. She has been teaching meditation for decades and integrates Buddhist psychology into her work as a psychotherapist. She teaches workshops in “Ethics: A Meditative Exploration” to mental health professionals.
Holly Pruett is a member of the Pine Street Sangha, co-founder of PDX Death Café, and founder of the Death Talk Project. She is a Life-Cycle Celebrant and home funeral guide, and is certified in Thanatology: Death, Dying & Bereavement, by the Association for Death Education & Counseling.
Don Tarbutton is a member of the Pine Street Sangha and co-founder of PDX Death Cafe. He completed the chaplaincy training program at the Sati Center for Buddhist Studies and went on to an encore career as a hospice chaplain. He has received an reward of excellence from the Oregon Hospice Association.