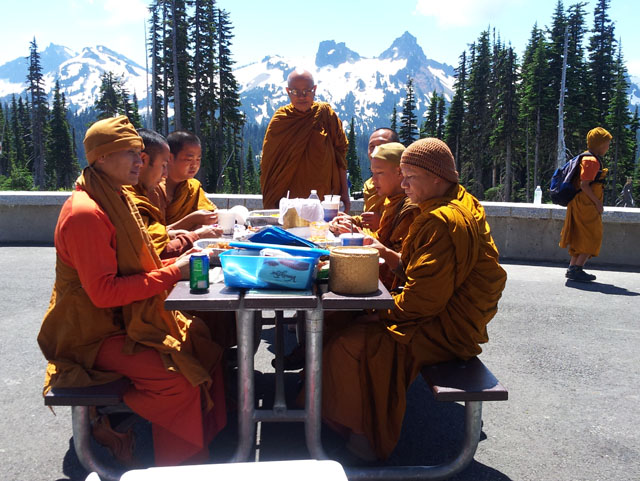 A dozen Theravada monks, most of them used to the sweltering weather of Thailand and Indonesia, explored the snowy slopes of Washington state’s Mt. Rainier, during a July visit.

Many of the monks had never seen snow before, and they responded with exuberance, gamboling on the mountain’s vast snow fields wearing saffron robes and most of them, sandals.

The field trip was organized by Phra Ratsamee, abbot of Bhuddhangkura Buddhist Temple in Olympia. The Rainier visit was just part of a month-long visit by the monks to the Seattle area and Texas, he said.

“They came here because they hear about the U.S.A. and that it’s a very big country,” Ratsamee said. “They like to visit and see how Buddhist temples are organized and how the monks are living in the U.S.A.”

The monks came from three wats (monasteries) in Thailand and one in Indonesia. One of the monks was born in Nepal, where Theravada Buddhism is uncommon, although he now lives in a Thai wat. 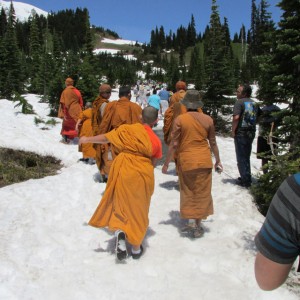 The visit with started with the monks taking their mid-day meal on several picnic tables outside the visitors’ center near Paradise Lodge.  While they made an unusual sight, in their saffron robes, they were ignored by the swarms of tourists, who were primarily focused on the mountain.

Joining the adult monks were three novices,  boys from Puget Sound-areas families who were taking traditional temporary ordination for the summer.

“The parents allow ordination as novice monk in our temple,” Ratsamee said. “One is a Thai family, one is Lao and one is mixed of American and Thai.”

The boys, also wearing robes and sandals, seemed to be having more trouble with the steep and snowy slopes than some of the adult monks.

Some of the monks hiked quite high on Rainier, on the same trail being used by tourists as well as by climbers descending from summiting the mountain.

At times the monks seemed like school children, swirling their robes around with beaming faces, so delighted were they by the brilliant sun and snow.

One tall monk, Ven. Phra Chumpon, seemed oblivious to the fact he was wearing thin flip-flop sandals when nearly everyone else on the trail wore heavy lugged boots.

Chumpon said he once hiked to base camp at Everest, and he strode far ahead of the others, ascending above 6,000 feet.

Then, as the sun started to sink, he came dancing back down the snow fields, one of the novice monks in tow.