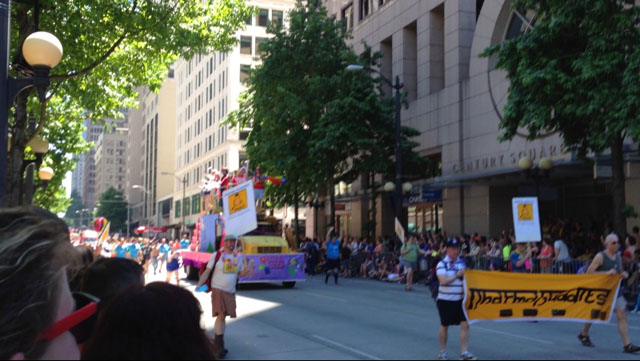 This year, as the Seattle area’s lesbian, gay, bisexual, and transgender Buddhists marched together in the annual June 30 Seattle Pride Parade, we did so with an extra spring in our step.

Just three days before we had received life-changing news, in a decision by the U.S. Supreme Court: California’s Proposition 8 violated the state’s own constitution. California was now free to resume marrying same-sex couples.

Additionally, the court found a major clause of the Defense of Marriage Act (DOMA) to be constitutionally flawed. The court concluded the federal government must treat all legal marriages from all states equally. 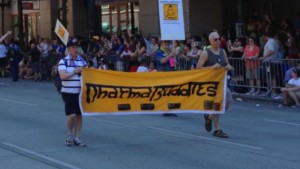 These decisions, combined with the warm sunny weather, made for what appeared to be record attendance at Seattle Pride events. The Supreme Court rulings were a kind of capstone, on the legal advances made in the United States by LGBT people in recent years.

Gay Pride gave our families, friends, and allies the ideal occasion to express relief and celebration, as we marched in the parade, handed out flyers, and answered questions at the information booth.

One encounter at the booth in particular struck Bill Grimsman, a counselor and psychotherapist based in Seattle, just because it was so unusually normal

While Grimsman was staffing the Dharma Buddies information booth, a friendly, relaxed heterosexual man in his early 50s approached the table.  The owner of a wedding planning business, the man was introducing himself to potential clients in the area.

“The reason this interaction stood out for me was because it was so ordinary and matter-of-fact,” Bill said. Any sense of awkwardness, which might have accompanied such discussions in previous decades, was completely absent.

Gay Pride commemorates the spontaneous demonstrations by the patrons of New York’s Stonewall Inn, in June 1969, which catalyzed gay activism across the United States. 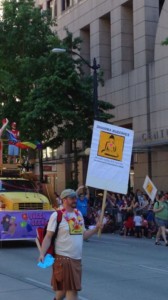 Confirmation of the right to marry made this year’s parade especially joyful for Seattle-area Buddhists from the LGBT community. Brian Smith carries sign.

During Gay Pride we remember those who suffered publicly and privately to make the world more accepting of everyone’s differences.  Gay Pride encourages all people, regardless of gender or orientation, to consciously celebrate the freedom to be who they are, and to love whomever they choose.  We also bring to mind the ongoing struggle against oppression and violence around the world.

Discrimination and persecution based on sexual orientation and sexual minority status remains a challenge for many people, as demonstrated by recent events in Russia.

Just prior to Seattle’s Pride weekend and the court decision, Seattle’s Dharma Buddies and Lotus Sisters meditation groups sponsored a mindfulness gathering for LGBT folks and their allies at the Washington Park Arboretum.

The evening began with a guided tour of the Seattle Japanese Garden’s features and history.  At the end of the tour, everyone convened in the Tateuchi Community Room to meditate, with the sound of bird calls and spring rain in the background.

Meditation was followed by a short dharma talk and a question-and-answer period. The evening concluded with a tea social.

The gathering allowed LGBT people, who usually sit in separate meditation groups or alone at home, to connect, converse, and prepare themselves to meet the pending court decisions with equanimity.

Dharma Buddies conducts an annual peer-led retreat that provides attendees an opportunity to deepen mindfulness practice in extended silence.  The theme of this year’s meditation retreat is “Moving into Radical Acceptance.” Increasingly, such a theme has many practical and social implications.

“It seems to me the idea behind Gay Pride is to achieve equal rights where we become ordinary citizens,” said Grimsman.  “I am filled with joy and a renewed faith in humanity, as I see how much progress has been made in a relatively short period of time.  Pride 2013 helped spotlight this for me.”

Many of us grew up in situations where it was suggested or directly stated that our sexual orientation or sexual minority status made us inherently immoral, or at least spiritually deficient.  Because of this, until the 1980s, openly participating in or talking about religion in positive terms within the LGBT community was rare.

Many of us had lost all interest in religion, preferring to ignore traditions that directly devalued and rejected us.  The denial of marriage rights (invariably based on religious arguments) was yet one more manifestation of this rejection.

But over time, some of us found that not all religious traditions had such narrow views of human sexuality and spirituality.  As we continued to search for appropriate spiritual paths to cope with the stress of being human, we gravitated to others who were doing the same.  In some cases we formed our own subgroups, where it was safe to be LGBT and religious/spiritual simultaneously.

The world is slowly accepting what has always been true—that human sexual expression is a broad spectrum. Dharma Buddies and Lotus Sisters are two of many spiritual groups that accept the full dignity of LGBT persons.  Along with providing support and encouragement to those on the Buddha’s eight-fold path, we participate in Gay Pride to let everyone know that there are LGBT women and men for whom spiritual practice or faith has always been important; that it is OK to “come out” as a spiritual person in the LGBT community.

0
SHARES
Share
Posted Under: 2013, Compassionate Action, Fall
About the Author: Eric P. Carter
Eric P. Carter is a technical writer and web developer born and raised in Seattle. He is a “student of Buddhist methodologies,” whose eclectic practice revolves around a Theravada core. Carter began meditating in 1996, and currently serves as a co-president of Dharma Buddies of Seattle.