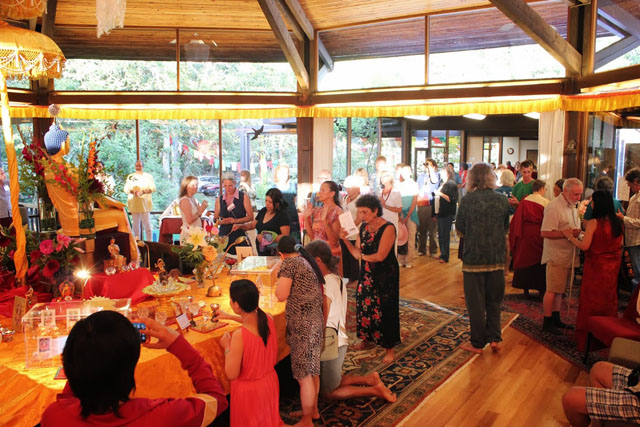 The visit was given new depth, for us at Saraha, by the sudden passing of our beloved founding director, the Ven. Lama Tharchin Rinpoche, only four days before the relics exhibit began.

The relic tour, founded by Lama Zopa Rinpoche in 2002, is both a traveling exhibit and an independent organization.  The organization, headquartered in the U.K., actually administers two tours, each traveling on a different trajectory throughout North America, Asia and Europe.

Saraha Nyingma Buddhist Temple connected with the relic tour through the inspired intervention of a local sangha member, Alan Stein, who had visited the tour at a stop in Mt. Shasta the year before, and had recommended to both sides that the tour visit Saraha this year. After a short exchange of messages, both parties had agreed.

The relics, from Shakyamuni Buddha and hundreds of enlightened Buddhist masters, manifested in various ways. Some were gifts conferred by living masters, such as articles of hair and clothing.  Some were “self-arisen,” appearing spontaneously in environments where special circumstances such as pure faith and devotion prevailed.

But most were from masters who passed away, leaving behind their relics, beautiful unusual substances varying in appearance and quantity, as physical reminders and enduring symbols of their enlightened state. 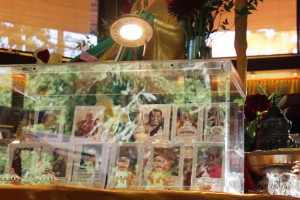 From the time when the scheduled exhibit dates appeared on Saraha’s calendar in November, 2012, a period of slow development gradually accelerated into the crescendo of the weekend’s event. For months the North American tour had been slowly approaching, leaving Mexico in May and gradually traveling north up the West Coast on its path to Saraha Temple in Eugene, Ore.

For people at Saraha, most of whom had never seen the tour, the main gap to be filled was that of knowledge.  The tour organization was magnificently helpful in addressing this issue in the person of Michael Fouts, the U.S. tour development and marketing director, who became the most helpful person we never met.

The second area of preparation was the temple itself.  Michael Maretich, Saraha’s volunteer facility manager, worked for months before the visit on upgrading, clearing and cleaning the temple’s 50-year-old, 7,000-square-foot structure, and 2.5 acre lot.

This was all coming to a positive if exhausted head when on July 22, just four days before the intended start of the exhibit, the shocking news arrived that Saraha’s senior founding director, the Venerable Lama Tharchin Rinpoche, had unexpectedly and suddenly passed away from a heart attack while traveling in California. Buddhism teaches widely about impermanence and death, but wisdom theory and present truth are never fully reconciled until experiences are faced firsthand in the mirror of one’s own life.

There was never any question that Saraha should compromise its important responsibilities to the tour.  Fortunately in this case, Rinpoche’s main dharma center in California, the Vajrayana Foundation, was able to immediately begin the traditional seven-weeks of ceremonies for his Parinirvana, or passing. 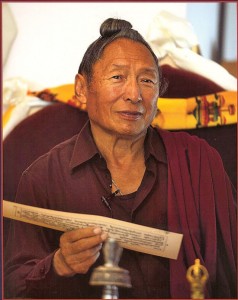 Ven. Lama Tharchin Rinpoche, the senior founding director of Saraha Nyingma Buddhist Institute, who passed away on July 22, 2013, only four days prior to the start of the relic tour.

Saraha members simply had to find a way to take it in all at once, and to carry on. The meaning of the tour itself, rather than being diminished by sadness over Rinpoche’s passing, was amplified.  That these relics, the physical remains of Buddha Shakyamuni and hundreds of other Buddhist masters, the great beings of Buddhist history whom we had venerated all our lives, should literally appear at our doorstep within hours of the physical passing of our own beloved teacher, was an indisputable symbol of blessing combined with the fiercest irony.

Then the relics appeared, driven gently up to the temple in a large white van conducted by Maitreya Heart Shrine Relic Tour managers Amanda Russell and Buddhist nun Venerable Norbu.  From that moment, all kinds of spontaneous helpers began flocking in. Happiness and enthusiasm flew and flourished everywhere like prayer flags in the wind, and the relic tour visit to Saraha proceeded without obstacle, incident, disagreement or inauspicious sign.

The opening ceremony on Friday, July 26, was attended by City of Eugene Mayor Kitty Piercy, Lama Tulku Ngaglo Rinpoche from the Sakya order of Tibetan Buddhism, Lama Tsang Tsing Rinpoche from the Kagyu order, and lamas Thrinley and Dorje from the Nyingma order. Local representatives from other Buddhist lineages, as well as from other spiritual traditions, also joined.

In a commencement address, Saraha’s representative said this about poignant power of the event:

“For those of us who knew, loved and studied Buddhadharma with Lama Tharchin Rinpoche, this week and now the opening of this mandala, this opening ceremony of the Maitreya Heart Shrine Relic Tour, revealing these holy relics in our humble temple, is like an excruciating key to the origin and meaning of relics. At once it is suffused with the immeasurable blessings of enlightened passed masters, suddenly joined before our eyes by our precious teacher Lama Tharchin Rinpoche.  It offers supreme comfort and simultaneously confronts us with a heartbroken realization that we have to take recourse, we have to come to embody the teachings ourselves. We have to grow up now.  That is how we can face Rinpoche, whom we miss so much, again.

“The relics are a reminder that this is possible. They are a special bridge between the ever-evaporating nature of the physical world, always passing away before our eyes, and the deathless world of wisdom transcending birth and death. We can be really happy about that.  We are blessed even by the thought of that. Hopefully this will encourage us all to engage and accomplish the traditions of wisdom and compassion. We dedicate the offering of this sacred presentation to the long life of wisdom teachers, and to the unobstructed flourishing of wisdom lineage everywhere.” 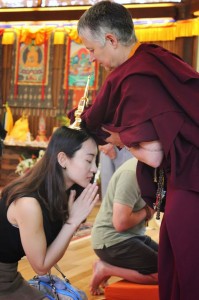 Then the event proceeded as a free and public exhibition of the relics.  Visitors, and also animals, were given the opportunity to witness the relics and receive blessings from the relics as well. Visitors filled the shrine, thousands of people and hundreds of animals, arriving in growing droves.  Many waited for hours in a line that stretched out of the building, through the parking lot and out to the street for their opportunity to see the relics. Saraha regrets if the wait was longer than some visitors could manage.

As for the experience, hopefully the photos attending this article give an idea of the mood and scene.

This was an auspicious event that seemed to bless all those who came in contact with it: members of Saraha Temple, the volunteers, the visitors, and the people of Eugene. Since the event, Saraha has received many kind words of thanks from relic visitors.

“On behalf of the spiritual founder of the tour Lama Zopa Rinpoche, and everyone on the tour team, I would like to offer our sincere gratitude and appreciation to all of you, and to all the many volunteers, for bringing so much benefit to so many people by welcoming the holy relics to Eugene last month. The event was a great success!!! All your careful preparations and promotion work came to fruition. Thank you so much.

“The purpose of the relic tour is to allow as many people as possible to view and pay respects to the holy relics.  Due to the sincere and dedicated efforts of you, as well as all the many volunteers, more than 2,000 local people were able to receive the blessings. They each created an ocean of positive karma, not just for this life, but for many future lifetimes to come… “

0
SHARES
Share
Posted Under: 2013, Fall, Sangha News
About the Author: Karma Thrinley
Karma Thrinley is a member of the Saraha Nyingma Buddhist Temple, and practices in the Nyingma tradition of Tibetan Buddhism.