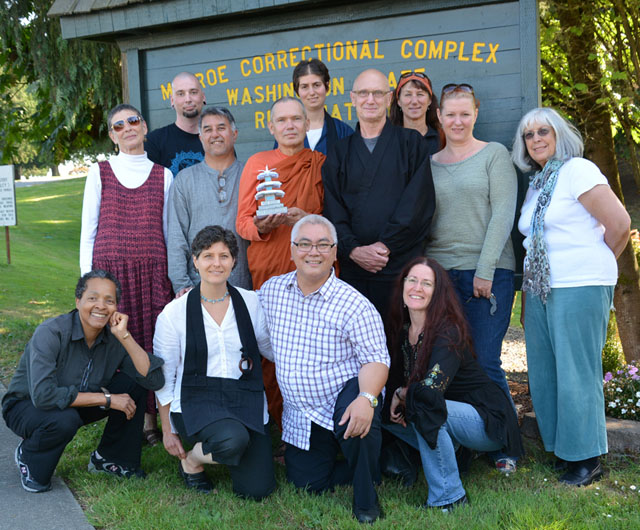 Guest sangha at entrance to the Monroe Correctional Complex after attending the WSRU Buddhafest.

In June and July, Buddhist inmates of the Monroe Correctional Complex in Monroe, Wash., celebrated their tradition in what has become an annual event known as “Buddhafest.”

For the prisoners this is a very significant day, a chance to celebrate their registered spiritual faith by sharing a meal in a festive atmosphere with their families, friends and outside sangha guests.

The celebrations generally include a talk from one or several teachers, a ceremony and short meditation, a food blessing and sharing of a meal paid for by the inmates. 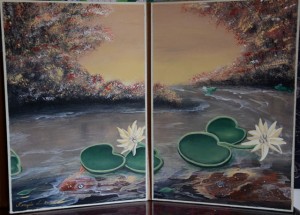 Renzi Lumen painted many works to offer as gifts to guests at WSRU.

Two annual events are offered by men in the units of the Monroe Correctional Complex, which is often called MCC. On June 3 inmates celebrated Buddhafest at the Twin Rivers Unit (TRU), followed by a July 20 event at the Washington State Reformatory Unit (WSRU).

The WSRU Buddhafest kicked off with greetings, and a joke followed by a story, both offered by Venerable Santidammo (Santi) Bhikku of Wat Atammayatarama in Woodinville, in his usual humorous manner:

“All the monks at our temple were out one day. When we returned home, we found a note on our table written by a man who we knew from our visits to the meditation group inside Monroe prison. His message stated he had just been released from prison that day and the first stop he wanted to make was at our temple to say ‘Thank you,’ for everything we did. He left a gift of 3 gallons of ice cream in the freezer. The monks were very surprised.

One monk exclaimed: ‘There are robbers who break into your house to take things, but some people break in to leave you presents!! See? The dharma really changes people.’” 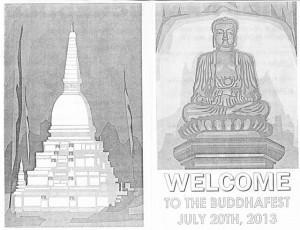 Cover design of the program for the Washington State Reformatory Unit Buddhafest.

Ven. Santi is no stranger to Monroe prison. He first came inside to teach meditation accompanied by Seattle teacher Dharmachari Aryadaka (now deceased), in 1999. In 1998 Aryadaka also brought in Lama Padma, from Chagdud Gonpa Amrita in Seattle, who then committed to visiting the men once a week for more than 13 years.

Although Aryadaka was key in establishing the regular Buddhist groups in MCC, long-term inmates recall that there was an interest in Buddhism inside prison before his arrival. In fact, it was an inmate who first heard about Lama Padma through an Alcoholics Anonymous sponsor, and so invited him to teach inside.

This same inmate excelled as an artist, drawing many detailed Buddhist-themed drawings. Most importantly, he inspired other inmates to visit the meditation group, and for some this practice became a life-changing experience – for the better. 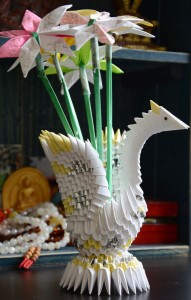 Inmates created exquisite sculptures like this bird with flowers – all made from folded pieces of paper.

All Buddhist sponsors and volunteers at Monroe undergo Washington state Department of Corrections training, in order to support the meditation sessions inside on a regular basis. Together with inmates they also help organize the Buddhafests.

The following impressions by some of the sponsors, as well as invited outside sangha, provide an overview and glimpse into the Buddhafest. Buddhist sponsor Genko Kathy Blackman Ni-Osho, of Dai Bai Zan Cho Bo Zen Ji in Seattle, teaches at the Twin Rivers meditation group. She reports:

“At TRU’s Buddhafest, attendance included about 25 men associated with the Buddhist group, guests, volunteers, several visitors from Chagdud Gonpa Amrita, and Ven. Santidhammo. The program was quite laid back, with plenty of time to eat a meal before the speakers.

“The men had chosen mindfulness as the theme for the gathering, and Ven. Santidhammo gave the keynote address on the topic. Several of the men spoke as well, including the young man who had volunteered to organize the event, in spite of never having done anything like that before in his life. We closed the event with a round of ‘musical tables,’ with guests and volunteers moving from table to table in order to speak with as many of the men as possible.”

At the reformatory unit, the group created a mandala from colored rice grains. Sponsor Emmanuel Go, from Chagdud Gonpa of Seattle, explained the meaning of mandala and invited each person to add some rice over the mandala outline as exercise in mindfulness. Together with dedicated fellow sponsors EKan Amy Darling (One Drop Zendo) and Eko Jeff Kelley (Seattle Soto Zen), he worked closely with the inmates to prepare a very meaningful afternoon program. 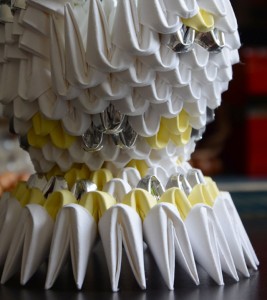 A detail of the folded-paper art where each section is delicately interlocked to create birds, flowers, stupas and other how-on-earth-did-they-do-that sculptures.

“In my years supporting prison Buddhist groups, I’ve witnessed a unique convergence of the ‘born Buddhist community’ (raised with Buddhist practice in the home in Asia or the U.S. from early childhood), and those who have encountered Buddhist practice as adults, often during their time ‘inside.’ The former community tends to gravitate to devotional practice, with the latter more interested in ‘just sitting.’

“In our regular Saturday program at WSR we combine meditation, discussion and twice-annual day-long retreats, in an effort to attend to the needs of everyone in their individual spiritual practice and development.

“And then there’s the big annual celebration! This most recent Buddhafest stands out as a particularly joyous and graceful blending of ritual, contemplative pause, social revelry and ease, traditional Vietnamese song offered by some of the inmates, enthusiastic karaoke, and even a bit of a cappella (singing without instruments).

“By beginning with a meal blessing and concluding with a mandala ritual, together all participated in creating a sacred container to hold the celebration. And as can happen in retreat or at any individual moment on or off the meditation cushion, right therein transformation occurs.”

Moses Tovar, of Sakya Monastery in Seattle, described his own transformation:

“The experience of going to Monroe, seeing people in that situation trying to deal with their problems, is truly humbling. It has helped me look at my suffering a little more closely.” 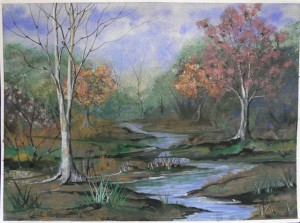 Jack Hannah had been in the art class offered at WSRU for only a few months when he painted this landscape.

Another Sakya Monastery sangha member, Maria Antilla, added: “My experience of the Buddhafest was a heartwarming, inspiring “Humanityfest.”

“When I first arrived, an inmate directed me to look at a large painting by an inmate.  The painting reflected all the peoples, cultures, and faiths of the world – all swirling together into a whole.  That painting perfectly reflected what I experienced at WSRU that day.  The inmates, their families, and we guests were a diverse group – racially, culturally, and religiously.  All those labels melted away and we joined together in celebration of our common humanity.”

Another Chagdud Gonpa Amrita sangha member, Jonna Sanders, shared this reflection about her first visit inside:

“From the first moment I stepped into the visiting room where Buddhafest was being held, to the last moment walking through the corridor to leave, I was overcome with emotion as my perception of scary inmate culture was completely transformed, to see the heart of these human beings who just happened to take a wrong turn in their lives. I was so honored to be a part of this joyous day.”

The inmates at WSRU also made gifts for guests of hand-made art including intricate folded-paper sculptures, ceramics and paintings. 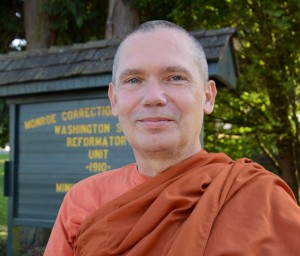 No stranger to prison dharma, Ven. Santidammo stands outside the entrance to Monroe Correctional Complex after the WSRU Buddhafest.

“Visually, one of the first things that struck me were the incredibly beautiful works of Buddhist-themed art from ceramics, to paintings, to complex ‘how-on earth-did-they-do-that’ origami, as well as the pride they took in their own and each other’s work.

“On a heart level, there was a generosity of spirit in that the men opened their hearts to allow us to spend time socializing, asking questions of each other and sharing both dharma and non-dharma conversations.

“Another highlight was that we all had the opportunity to collectively create and then dismantle a mandala. And near the end of the day, following in the footsteps of our hosts, I decided to take a cue from their courage and to get up in front of everyone and participate in karaoke! … I would love to return and spend time with our fellow dharma brothers, whom I thank for their inspiration and generosity.”

Many have witnessed time and time again “change” among the participants of the meditation group. The committed participants work hard at meditation practice. Of these, some have made a choice to make the best of what they have. If they cannot change their outer circumstances, they realize they have full control over their inner world – and can change their minds. And that – makes all the difference for a better world.

Note: Sravasti Abbey preserves a fine online collection of written and visual contributions by inmates inspired by the Buddhadharma, including those from Monroe.

0
SHARES
Share
Posted Under: 2013, Fall, Prison Dharma
About the Author: Caterina De Re
A former vice president of Northwest Dharma Association, Caterina De Re has volunteered at the Monroe Correctional Complex since 2007. As an interdisciplinary artist her focus is on art, technology, Buddhism and service. She is a director for Dongyu Gatsal Ling Initiatives and is especially devoted to helping female monastics in the Himalayas and Tibet.