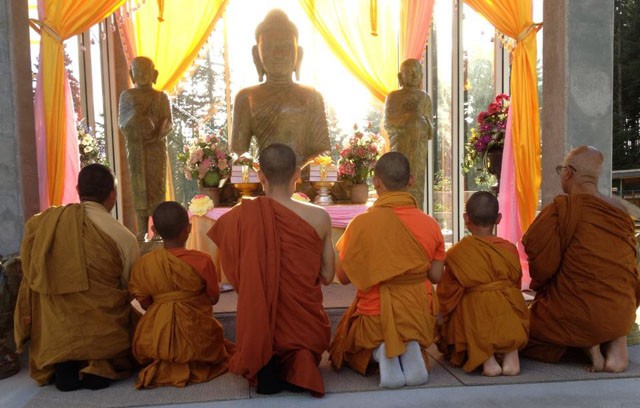 Monks gather around the Buddha statues.

The stupa will house sacred Buddha relics, including a fine bone fragment and ashes, from Sri Lanka. Venerable Kosal Suon, abbot of Wat Prachum Raingsey, said the $200,000 building project will be celebrated with a grand opening ceremony in 2014.

“People ask me why I don’t build a big temple as a first project,” Venerable Kosal said. “I answer that our first project should be an act of devotion for the Buddha. Then later we can build a temple for the people.”

The octagonal stupa is a classic Cambodian design, and will feature many authentic works of Khmer art, imported from Cambodia.  Earlier this year the temple community installed a seven-foot green marble Buddha, made of beautiful stone from Pursat province of Cambodia, famous for its high-quality green marble.

Venerable Kosal Suon has now commissioned artists in Cambodia to construct classical stone seven-headed naga-dragons, to guard the stupa and its gates.

As a native Khmer Krom, an ethnic Khmer born in the Mekong Delta region of southern Vietnam, Ven. Kosal Suon studied Buddhist philosophy and Pali-language studies in Cambodia and Thailand. He came to America in 2006 to serve the Washington state Cambodian community. 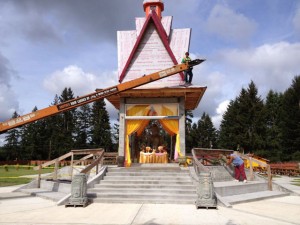 A crane in the final stages of building the stupa.

“I would like this place to be a good place for the Cambodian community to be proud of,” Ven. Kosal said of the stupa and its grounds.

“When they come here, it will be like they were back in homeland of Cambodia,” he said. “The Khmer art, Cambodian-style buildings, and landscaping, will make them feel happy. They can come, relax, eat together, practice meditation.”

Ven. Kosal is landscaping the 5-acre temple precincts with flowers and foliage that will be reminiscent of a Cambodian landscape. Ornamental tropical plants and flowers, and varieties of palm trees that will endure the Northwest winters, will add to the tropical atmosphere. 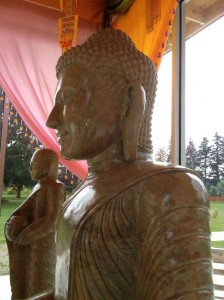 In his seven years of residency in Washington state, Ven. Kosal Suon has become a venerated leader in the Cambodian community. “I teach only the dhamma of the Buddha,” he said. “I never pay attention to the partisan politics that divide people; only to the dhamma that unites people and brings peace.”

Ven. Kosal’s days are full of activities, ministering to the needs of the Buddhist community from Olympia, Tacoma, Seattle, and Lynnwood. He is also helping to establish a Cambodian community in Surrey, British Columbia, Canada.

After the completion of the stupa in 2014, Ven. Kosal said the next project will be to begin construction of a temple (vihara) assembly hall, where Buddhist people can gather to celebrate the traditional holidays. Presently, the community makes do with an assortment of tents, booths, and a shrine hall in an old garage, which has been remodeled to house a lovely Buddha statue.

Venerable Kosal Suon, a monk for 24 years, came to the United States in 2006.

9
SHARES
Share
Posted Under: 2013, Dharma Healing, Arts, Fall
About the Author: Venerable Santidhammo
Venerable Santidhammo (Tom Flint) early in his life studied in the Catholic seminary of St Pius X in Covington Kentucky, studying for ordination to the priesthood. He later joined the Air Force and served in the military for four years, and then worked as a journalist and activist in Seattle. He now is a resident monk at Atammayatarama Buddhist Monastery in Woodinville, Wash., where he teaches Westerners and also actively teaches around the region. He regularly visits Cambodia to offer charity assistance there.