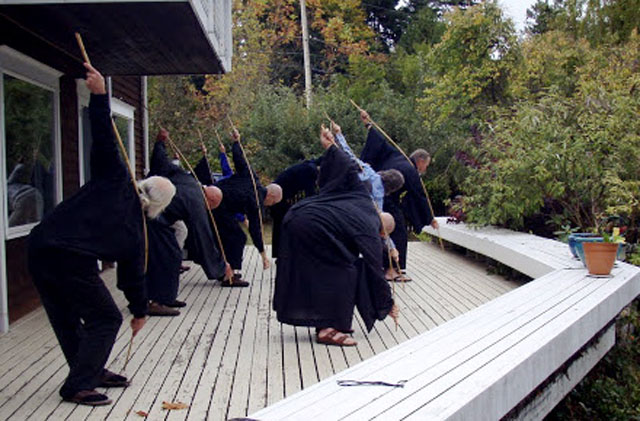 Ten years after its founding by Koshin Chris Cain, Puget Sound Zen Center has grown so strongly that the sangha is seeking a new and larger home.

Currently the 30 or so members practice together in a former artist’s studio on Vashon Island, a largely rural island west of Seattle on Puget Sound.

“In the last few years we’ve had a lot of growth on two ends of the spectrum—in our family group with lots of young kids, and in groups that explore the end of life, creating a space where that difficult subject can be approached more openly,” said Abbot Cain, speaking about the group’s growth. “More broadly, I feel there’s a real need in our society to slow down and take time with silence.”

Our busy zendo offers half-day sits on the first Saturday of each month, which attract islanders and mainlanders as well. The Art of Living and Dying groups, embraced by the wider community with enthusiasm, meet once a month. Practice Plan participants and precepts classes meet another evening. Both a women’s and a men’s group meet at the zendo. We hold three-day non-residential retreats as well.

“The Zen center has had the good fortune, with the creation of several new programs, to have captured the imagination and spirit of the Vashon community,” said Christopher Ezzel, board president, an architect and a senior student and instructor of Chado (the way of tea).

On Sunday mornings our zendo is bubbly with kids, ages 2 – 14, and their parents. 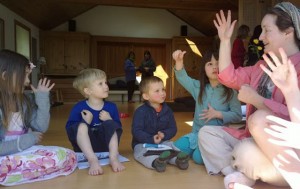 “One of the most counter-cultural things we can do is to show our children what it’s like to be silent and still–to really slow down,” said Elizabeth Fitterer, newsletter editor, about the family Zen program. “The Zen Center is a place that helps me give that gift to my kids, and I think more and more parents and grandparents these days are sensing a need for that gift.”

Cain consistently makes friends with other denomination’s pastors, often speaking at Unitarian churches both here and in Seattle, and he is also the teacher of a sangha in Oslo, Norway, where he goes twice a year.

Ten years ago the Vashon sangha started meeting, on Wednesday evenings only, in a loft over an orthodontist’s office, next door to a malt shop in a busy mall. The smell of hamburgers, the sounds of cars and people walking by, accompanied our silence.

Today, in our serene ex-artist’s studio, we sit with the sounds of seagulls and pigeons, breathing deeply of salt sea air from the Puget Sound just below. We now have the choice to sit either Wednesdays at 7 p.m., or six days a week at 6:30 a.m.

“All of our programs exemplify ways that we can expand the call to serve the community, but we will need a bigger space in order to answer that call,” said Van Crosier, a longtime center leader. “We love our cozy little zendo-by-the sea, but it is far from town, has no kitchen or possibility of expansion, and is a rented outbuilding adjacent to a rental home. We want our own place.  When do we need it?  Hard to say. We’re good for now, with no need to move immediately, but that doesn’t mean we shouldn’t be looking.” 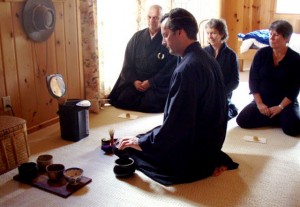 Cain comes from North Carolina and still has a touch of Southern charm, often manifested in boisterous laughter. On Vashon he and Lidunn started a business called Still Sitting, making robes, stuffing cushions, all of which still demands their time. Then daughter Eva came dancing into the family. Now, Lars is a math whiz and plays the ukulele. Lidunn, originally an architect from Norway, has began to design again.

Cain practiced as a monk at Mt. Baldy Zen Center from 1991 through 1999, and was ordained as a teacher by Joshu Roshi, a Japanese-born Zen master.

In the most recent Puget Sound Zen Center newsletter, in an article entitled “The Way Forward,” Cain expressed his angst about Joshua Roshi’s actions, and explored what it means for him and his own leadership.

“The truth is, I have great respect for Roshi’s teaching and the training he set up,” Cain wrote. “And I have a great deal of anger and bewilderment about the Roshi’s lack of regard for women.”

But a decade and thousands of miles separate Puget Sound Zen Center from the actions of Joshua Roshi. And so the Vashon Island sangha is determined to continue the group’s growth in an ethical manner, and to continue growing as people need.

“Composed as a living body, our sangha has had the opportunity to share serious Zen practice as well as a multitude of supporting activities. We have been able to fully use our current space with creativity and great enjoyment,” said one of the original supporters, Elaine Hanowell, a sculptor. “A move to a larger space would facilitate continuation of this rich core, could make it possible to do more or longer retreats.”

And so it goes with impermanence—change is in the wind. We would like to have a larger place with room for zazen, outside kinhin (walking meditation), residential retreats, meetings, and oh, yes—plenty of parking. Meanwhile, the sits go on . . .

0
SHARES
Share
Posted Under: 2013, Fall, Sangha News
About the Author: Kajira Wyn Berry
Kajira Wyn Berry is on the one path with many road signs, primarily Rinzai Zen. The Vashon Island resident is a calligrapher, photojournalist, adventurer, great grandmother, and author of “Everlasting Sky,” a novel about the first empress of China.