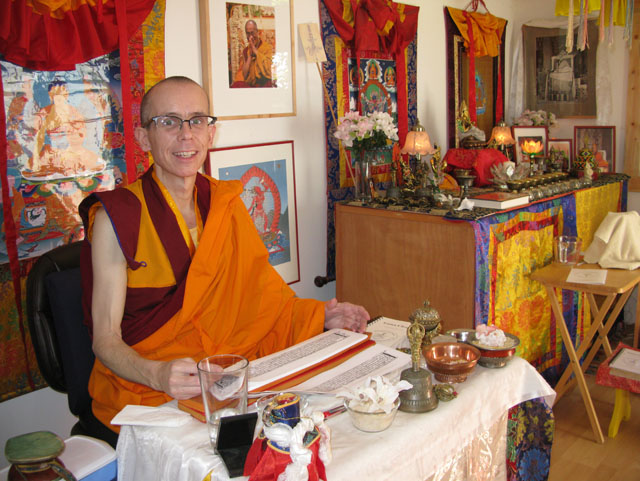 In his burgundy and saffron robes, Losang Tsering is often smiling. Many would find this strange as he is suffering from a very aggressive liver cancer. But he thinks of his illness as a great blessing, because it has hammered home the Buddhist teachings of death and impermanence.

On June 13th of this year, Tsering received ordination, to be a monk, from his teacher Jangtse Chöje at Vajrapani, Calif.

Tsering already had been teaching formally since 2002, primarily out of the small gonpa (temple) behind his home in Seattle’s Fremont neighborhood, at the insistence of his own precious guru Gen Lobsang Choepel (Gen-la).

Tsering has practiced Buddhism for nearly 25 years, getting up at 3 a.m. to begin his daily practice, after which he devotes the rest of his time to study, translation, and teaching. He has been a great resource of dharma as he has translated numerous texts, and founded and currently heads Dechen Ling Press, a non-profit 501c (3). He offers all of his royalties in support of Gen Lobsang Choephel’s  Ganden Kachoe Monastery in South India. 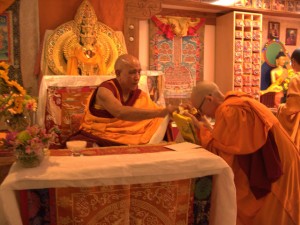 Why does one become an ordained monk?

When one takes monastic vows you assume a certain proscribed set of moral conducts related to body and speech. By maintaining pure moral discipline of body and speech you cease creating a great deal of negative karma that has the potential to propel you into a less fortunate state of existence in the future. Additionally, of the three higher trainings—moral discipline, concentration, and wisdom—moral discipline lays the foundation for successful concentration which can be used as a tool to not only create the causes for happy rebirths in the future but also serves as the basis for developing wisdom which ultimately leads to complete liberation from samsara. Thus, moral discipline is the foundation for happiness in this life, future lives, as well as liberation and enlightenment. It is for these reasons that one takes monastic vows.

What is the difference between being ordained and being a lama?

It’s funny about the difference between being ordained and a lama. There are people who aren’t familiar with Buddhism who say, “So David, he’s now a lama.”  They think monastic vows make a person a lama.

Monastic vows are taking a set of vows based in celibacy and certain moral disciplines. And then there are robes and a shaved head,  so others can separate the monastics from the laity. Also, monastics live in a monastery, hence the name, but these days there aren’t many monasteries in the West. So we end up outside of the monastery.

To be a lama, you yourself have studied and practiced and reached attainment. And you studied under a lama who was given permission and empowered to be a lama by their own teacher. Then your own lama, or guru, does the same for you and gives you the permission to teach. But then you also need someone to be your students.

I say ‘permission,’ but Gen-la, my teacher, asked me for years and years to teach. I kept refusing him. But if I had said, ‘I want to be a lama,’ I bet he would have said I was out of my mind, ‘No.’

So you shouldn’t be doing anything like going to your lama and saying, ‘Make me a lama,’ and then going to students and saying, ‘I want to be your lama.’ That is completely inappropriate.

Gen-la began to ask me to give teachings and empowerments since 2002 and I refused for years. Around 2006 he started getting really direct about it and a little bit upset with me to continue to defy his requests. So I conceded. But it was only with one or two students who would request teachings.

Then Gen-La was still unhappy with me because he wanted to know what teachings I was giving and how many students I had, what sort of empowerments had I been giving. I had to say no to those inquiries. I told him I was meditating and translating and then he would get really disappointed.

So then I told him, ‘Okay, I’ll make more of an effort.’ He got really excited and this is when he wrote this beautiful letter, telling whoever read it my qualifications, and his assent to me teaching. 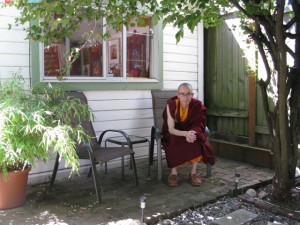 The lama on his porch.

Would you self-identify as a lama?

I wouldn’t go around calling myself a lama, but if a student called me a lama I couldn’t technically say ‘no.’

Do you think that the process of becoming a teacher in the West is being improperly done?

In certain circumstances, yes, it has become like everyone wanting to become a yoga instructor. ‘Master this’ and ‘master that,’ It has become chic to call yourself some kind of guru. It has become a problem. In America, if you say, ‘I am not qualified,’ and have a sincere humble attitude, people will walk out the room.

And if you do the opposite where you say you know all these qualities then they will stay and listen. We live in a self-marketing culture. Whereas in Tibet if a lama sat up there and said what a great lama he was, what qualifications he had, the Tibetans would be like, ‘Oh my God, you’re embarrassing yourself.’

Do you have any advice on how a student could verify the validity of a teacher they want to study with, or with one they currently have?

This is what I tell people: If you are interested in a teacher then enter their name in Google. Enter it with ‘scandal’ or ‘controversy,’ and see if anything comes up.  It doesn’t matter how famous they are, or what number of reincarnation they are, or how attractive they are, or how many students they have. Check them. Don’t just go because your friends are going. Go to teachings, general teachings, don’t go to tantric teachings. If you do take tantric teachings you have to view them as your teacher, and so don’t do those until you are sure. 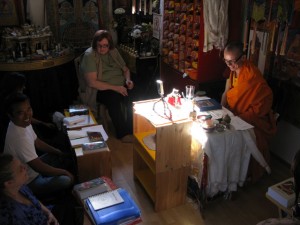 What caused you to become interested in the dharma?

There was a fateful afternoon when I saw a fly land on a table. To the fly it was a huge landing pad, or something, but to me it was a coffee table that I set cups on. It was only a coffee table in relation to and dependence upon the relationship that beings had with it, and before that it was a tree. I was about 12 or 13 when this happened.

Then I read a book called Kindness, Clarity and Insight, around 1989, and frankly, although it was the most moving event of my up to that point, I was bent out of shape a little bit by it. I thought, ‘they stole all my ideas!’ However  it had whole bunch of new ideas, and systematized them in a way that I could really work with.

Did you progress to and through the dharma in a smooth process?

No, no! It was a very difficult pathway. I had wild teenage years, I was terribly unhappy, and I did what many teenagers in the ‘70s and ‘80s did. Finally I got my footing, and then started practicing dharma.

In our very secular and mundane focused country, can you talk about the tradeoffs you had to make as a dharma practitioner?

Well, I didn’t have to make any tradeoffs. I chose to. I was deeply unfulfilled. I was in real estate, I was doing okay, making some money, but I was terribly unhappy. Right before I read Kindness, I had this insight about literally trading my life for cash. I realized that if someone had said, ‘I will give you a million dollars for 10 years of your life you would be, like, ‘No way.’

So that was what I was doing? There was no meaning to my work other than to make money.  I wanted something with a totally different trajectory. So I started selling off my stuff, so that I could devote all my time to practice.  It has been that way ever since. 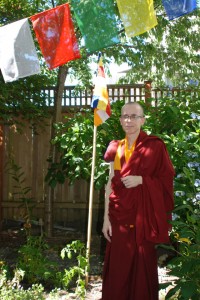 Losang  Tsering in his back yard in Seattle.

In Mahayana Buddhism it is often said that the root of the practice is the teacher. Can you talk about your primary teachers?

The most influential teacher in my life, who completely changed my practice and my life to this day, even though we didn’t spend a lot of time together, was Geshe Khenrab Gajam, whom I met here in Seattle around 1991. That was a life-altering meeting. I still constantly think about him. When he was here he asked me to come visit him where he lives, in Montreal, and so I did.

I had met a few lamas in Seattle but it wasn’t like meeting Geshe Khenrab. Reading about different lamas and then meeting someone who was exactly like everything you hear about, particular Kadampa Lamas, these simple, benevolent, non-pretentious, loving beings, was amazing. He was the perfect embodiment of love and compassion [pauses and smiles for a time].

He was a Geshe Lharampa as well, which is the highest degree you can get, but he wasn’t pretentious. We were inseparable for two or three occasions in Montreal, for two or three weeks at a time. Then I was going to go live with him and become ordained. I got ready to go but then he passed away, so, that didn’t happen. That was my first attempt at becoming ordained. It took me a long time to find another lama whom I felt comfortable with.

Gen-la was another very important teacher in my life. He was told by one his gurus, before he passed away, that he would be meeting me and that we had known each other in my previous life. He also had dreams indicating that he should entrust me with all of his teachings, transmissions, and empowerments, so that I could pass them on to Westerners.

Because of this, Gen-la gave me hundreds of transmissions, including commentaries and oral transmission of hundreds of important texts, as well as empowerments and oral instructions on the practices of a vast number of deities. I then completed roughly 40 retreats, ranging from a few weeks to  several months, to become qualified to transmit the teachings and empowerments.

You often extol the virtues of other schools of Buddhism and praise other religions. Can you tell us your views on this?

This is where I border on being a heretic [we both laugh at length]. I don’t think that there is only one way to become enlightened, even in Buddhism. I’ve read St. Teresa of Avila’s biography many, many times. I have read biographies of many Catholic saints, and few Hindu yogis. Everybody has their own way about getting there.

So much of the problems of religion come from that, ‘We’re right and you’re wrong and we’re going to beat you over the head until you get that or you’re dead,” which is really bred out of insecurity. If you had some deep-seated experience and understanding, you wouldn’t be so threatened by different ideas.

Now that you have been ordained, what do you see as your role here and now, and into the future?

One thing that Geshe Khenrab said to me, when he wanted me to come live in Montreal was, ‘Then you have to teach.’

He said, ‘That’s your job when you are monk. You have to teach.’

All I do now is translate, meditate, study, and teach; so those are four good jobs for a monk.

0
SHARES
Share
Posted Under: 2013, Fall, Sangha News
About the Author: Guru Dorje
Guru Dorje is an aspiring dharma practitioner of Tibetan refugee parents, and a student of Losang Tsering. He is often failing in his efforts to practice dharma in the Geluk tradition, but finds solace that it is still authentically there, through the strength of effort of people like Tsering, and therefore still can be attempted anew.