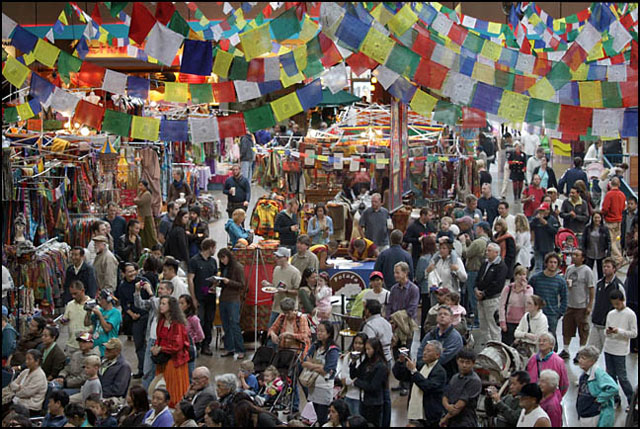 “What is Tie-Bet Fest?” asked a passerby, as she wandered into one of the many festive-looking booths, decorated with Tibetan prayer flags and thangkas (Tibetan deity paintings), filling a large hall at Seattle Center.

Almost immediately upon hearing the suddenly familiar correct pronunciation of the word, realization descended on the visitor. She noticed the prayer flags, the various exotic paraphernalia displayed on the tables, pictures of the Dalai Lama and it all came together in her mind.

Ahhh…enlightenment. Well, a mini-enlightenment moment of sorts. If only enlightenment were so easy…then perhaps things like wars and suffering would be simply subjects one read about in a history class.

It is late August, the time each year when Center Hall at Seattle Center becomes a bustling Himalayan bazaar. As visitors wandered from booth to booth inspecting all sorts of wares from the Far East, they could be forgiven for briefly thinking they were in a market place in Lhasa, the capital of Tibet.

From the main stage, renowned Tibetan musicians decked out in their traditional regional costumes, with dramyen (Tibetan guitars) in hand, performed Tibetan operatic dances and other pieces all weekend. Tibetans young and old watched with rapt attention, seemingly transported to an ancient land far away…one they remember calling home a long time ago 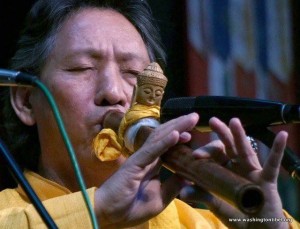 It is only when the music was briefly interrupted, with an announcement in perfect English, did a visitor realize they were at a cultural festival at Seattle Center, a community activity center that is the former site of the 1964 World’s Fair. A kind-looking lady in a chuba, a traditional Tibetan dress, made announcements at regular intervals between the performances.

Tsering Yuthok, the president of the Tibetan Association of Washington, from the stage introduced the musicians, and the meanings of the performances and songs, for the gathered people.

The festival, she said, is produced in partnership with Seattle Center and is the largest Tibetan cultural festival in the Pacific Northwest. It attracts people from the local Tibetan community (as well as from Vancouver B.C., Portland, San Francisco and Salt Lake City), to dress up in their traditional costumes, watch authentic Tibetan entertainment, and eat Tibetan food.

“For the first time in the 18 years of the festival, multiple grants were secured from Seattle Center, King County 4Culture,the City of Seattle Department of Neighborhoods, and the Washington Arts Commission,” Yuthok said proudly. “The festival has definitely grown over the years. Attendance has grown. So have vendors and other nonprofit participation. Sponsors, the budget and therefore the production have grown larger, and there is more variety.”

The 2013 Tibet Fest did seem extra special, including a visit from Lobsang Sangay, the democratically elected prime minister of the Tibetan administration in exile, and opened by Seattle Mayor Mike McGinn.

While the festival is established now, just the idea seemed preposterous when it was first proposed by T.N. Shakabpa, former president of the Tibetan Association of Washington.

““Are you crazy?” Yuthok, who then served on the association board, vividly remembers saying in response to his idea.

“The Tibetan community at that time was really small and funds even smaller,” she said now.

However, led by Shakabpa’s bold vision, the association submitted an application and the community held its first festival.

“Visitors to our festival such as East Indians, and a Chinese friend, have asked me how we manage to put on a two-day festival, knowing that our community is so much smaller than theirs,” Yuthok said with pride. 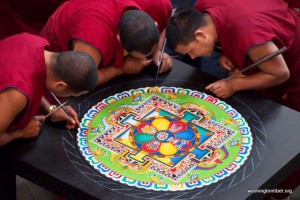 Monks from Drepung Loseling Monastery in India created a sand mandala at Tibet Fest in 2012.

She added, “The driving force for Tibet Fest is essentially the preservation of our culture, as it is truly being destroyed (in Tibet). That is the main goal and motivation. The unexpected reward has been the opportunity to showcase the growth of our community, when our own local Tibetan children have been able to perform Tibetan songs and dances at the festival.”

Meanwhile, for the now-enlightened visitor, the wandering window-shopping experience has quickly turned into an educational one.

Shopkeeper Tingkhye is at his cheerful best when explaining anything Tibetan or Buddhism-related. His eyes light up and an even wider grin appears, stretching the wise wrinkles on his face.

He senses a lot of empathy from encounters at the festival. “Many people want to help the Tibetan community but often don’t know how,” he said. “Tibet Fest gives them an opportunity to see for themselves, meet actual Tibetans, and talk to them and find out for themselves.”

He added he also notices that among the many visitors are a lot of familiar customers, who haven’t seen each other for a long time.

A festival like this “is very akin to a reggae music festival or Comicon (a comic book convention) where people with a particular taste get the opportunity to come together to connect, see, learn and just be in that environment. Also some of them are able to purchase items that they’re typically unable to find in regular stores,” he said. “Then there’s the group of visitors who have never been to Tibet nor had the opportunity, and Tibet Fest allows them a rare glimpse of this ancient culture and people.”

Often people curious about the products also gain an introduction to Buddhism and Tibetan culture, he said, because of the close interconnectedness of religion and culture for Tibetans.

Tingkhye and his wife Marguerite Tingkhye, also run a Tibetan store, Pema Kharpo, in the Greenwood neighborhood of Seattle.

As the day came to an end and the bustle of the festival died down, Marguerite spoke more philosophically.

“While the opportunity to share and display what the Tibetan culture has to offer to the local community at large – the arts and crafts, the language, the color cultural songs and dances, the philosophy, sand mandala, etc. is good…there is some sadness in it too,” she said. “Sadness that certain aspects of it are simply displayed almost as a museum piece and out of context. Like a sand mandala, for instance in Tibet, is a very sacred ritual and not simply a demonstration for the public.”

Last year monks from Drepung Loseling Monastery in India were invited to create and display a sand mandala at the Seattle Center, during Tibet Fest. For two long days they worked with detailed focus, creating a complex iconographic work from fine multi-colored sand, painstakingly sprinkled in minute detail to become an intrinsically exquisite work of art.

The sand mandala was exhibited as a display of the Tibetan culture, but its core significance is rooted in the sacred tenets of tantric Tibetan Buddhism, as a metaphor for the impermanence of life.

So do you ever regret not taking that epic expensive trip to Tibet? Well, every year during the last weekend of August, at Seattle Center, a glimpse of this mystical land and people about whom we’ve so often heard, can be had for absolutely free.

0
SHARES
Share
Posted Under: 2013, Fall, Sangha News
About the Author: Jamyang Dorjee
Jamyang Dorjee is a Tibetan Buddhist living in Bothell, Wash., with his wife and two children. He is a former president and board member of the Tibetan Association of Washington. He volunteers as a teacher at the Tibetan Sunday Language & Culture School, and sits on the school's steering committee.