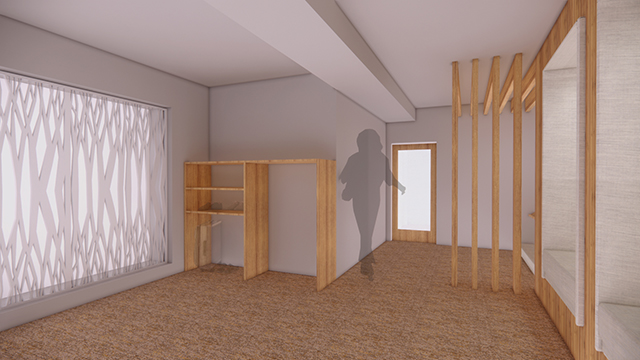 Seattle Tacoma International Airport is getting a new and improved prayer and meditation room, after four years of encouragement by a collective of Buddhist, Muslim and other religious leaders.

Because of the engagement between religious leaders and port officials from the start of the process, the new 370-square foot prayer and meditation space will include elements designed to work for all religious traditions while offending nobody. 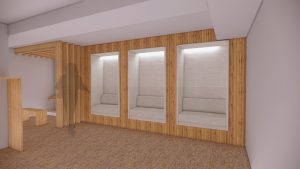 Three alcoves across the back of the room will offer privacy for meditation practice.

The prayer and meditation room is being built at the south end of the Sea-Tac terminal, on the lower level near the train connection to the South Satellite. It will be paid for through a $1 million item in the port budget. This also covers an adjacent “sensory room” for people who need quiet, and a vestibule connecting both.

In the interim travelers are still able to use the current Sea-Tac prayer and meditation room, which is in the center of the terminal on the mezzanine level above ticketing. The new room is to open sometime before the end of 2020, after which the current room will be shifted to another use.

First opened in 1971, the original meditation room was closed in 2015, after usage dropped partly because new TSA security procedures encouraged passengers to get through security first, before they considered praying or meditating.  The port re-opened the original room in 2017, as a result of initial negotiations with the religious groups.

The new facility will include multiple elements specifically intended to meet the needs of meditators, whether they be Buddhist or more secular meditation practitioners. 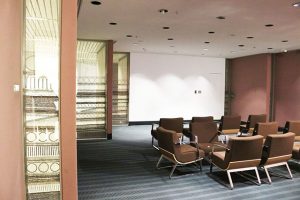 The current meditation room, on the second floor mezzanine, is outside of security thus lightly used.

Among the features for meditators:

“Airports are big, noisy, and often uninviting,” wrote George Draffan, executive director of Northwest Dharma Association, in a written response to questions. “The new prayer and meditation room will give Buddhists, and other travelers, a dedicated place to reconnect and renew with their spiritual tradition.” 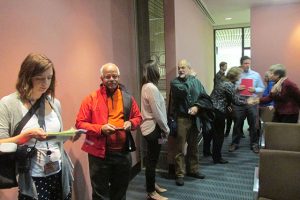 Religious leaders from around the region gathered for the 2017 re-opening of the current Sea-Tac mediation room.

The room also will include features to meet the needs of people from other traditions. Of particular importance during the design process was meeting the needs of Muslim people, especially women, since their tradition asks them to pray five times daily. Some of the details developed with Muslims in mind include:

Jewish and Muslim people didn’t need so many particular details, according to representatives at the meetings. One support for Christians will be a kneeling bench for prayer, on the left just inside the door.

After discussion there was a collective agreement for the signage to include an icon of two hands pressed together, various versions of which are found in Hindu, Sikh, Buddhist and Christian traditions.

While this gesture isn’t used in Islam, Muslim leader Aneelah Afzali said most Muslims will easily understand the intent. Afzali is executive director of the American Muslim Empowerment Network, (A program of the Muslim Association of Puget Sound). 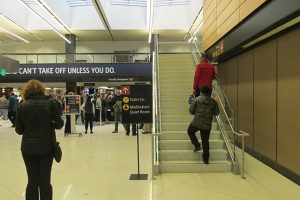 People can access the current meditation room up a flight of stairs.

Two hands pressed together also isn’t used in Judaism, but Rabbi Samuel Klein, director of Jewish engagement for the Jewish Federation of Greater Seattle, said he thought the icon would be “perfectly fine and non-denominational.”

Another instance of deep interfaith listening was the decision to use the name “Interfaith Prayer and Meditation Room,” instead of putting the word meditation first. This emerged from the collective understanding that more religious traditions think primarily in terms of prayer instead of meditation, and the collective wanted the room to be as appealing as possible to the most people.

A striking aspect of the project was the fruitful collaboration between Muslim and Buddhist leaders, especially given how different their traditions are. After several discussions between people from the two traditions, it became clear that Buddhists’ interest in meditation anywhere, and Muslims’ commitment to praying five times daily, made them natural allies. 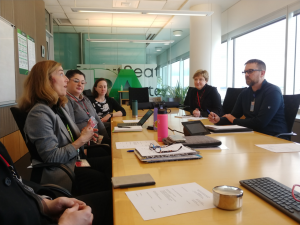 “I think for Buddhists and Muslims it is a daily part of the practice, for Muslims five times a day,” Afzali said. “In both instances you want to have a spiritual space, an ability to have some kind of sacred space,  to really reflect, to really contemplate, to achieve that connection that Buddhist siblings can relate to and Muslims as well.”

The need for Muslim women to have a secure place for meditation was a key point that persuaded the Seattle Port Commission to approve the new airport prayer and meditation room, and the funding needed to build it. During the process Muslim women several times testified in public, before the port commission, about how uncomfortable it is for them to pray in exposed public places.

“Our prayers are very physically active, and they include things like bowing down, prostration down on the floor. If you’re in those positions, and you are not in a faith-secure place, this can lead to potential concerns, violence, safety issues,” said Afzali. “There is a safety concern, especially for women, especially when you’re visibly Muslim, especially, unfortunately, in the current environment in which we live, where Islamophobia, and anti-Muslim hatred, bigotry and even violence, is at a high level.” 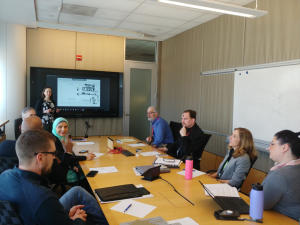 The smooth interfaith collaboration behind the project, reflected the history of relative tolerance and acceptance of diversity in the Northwest.

“The region’s Buddhist and Muslim communities provided a lot of leadership on this project, and the port commission listened and supported the needs of the religious communities,” Draffan said. ‘This is an especially welcome accomplishment in a world that suffers all too often from inter-religious strife.”

“The Port of Seattle is tremendously appreciative of the cooperative process that brought us here and continues for this project. Everyone who participated should be proud,” wrote Sea-Tac spokesman Perry Cooper in a statement. “Together our goals to provide opportunities for a wide variety of communities during their travel experience will be seen every day this new facility operates.” 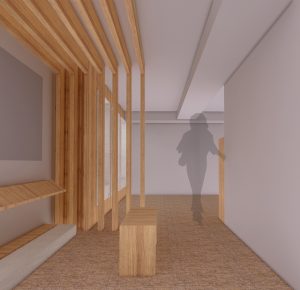 The new prayer room also will include a place for Christians, or anybody else, to kneel and pray.

A key part of the project has been developing a meditation room inside of airport security, so travelers will be able to use it while waiting for flights, or while transferring between connections. Finding space for a room inside of security was made difficult by the fact that until the onset of the COVID-19, Sea-Tac was one of the fastest-growing major U.S. airports in terms of passenger volume, and already the most compressed in terms of number of passengers per acre. In short, there wasn’t much room.

Port officials had to move some offices out of the space near the South Satellite, to make room for the coming prayer and meditation room. If this room is successful the port is already planning a second, perhaps as part of the design of a four-story building planned for C Concourse.

“We hope the project, and how it was initiated and carried out, will be recognized as a model for other airports and other cities,” Draffan said. “It shows that religious people of good will, and port authorities who make decisions and allocate resources, can all come together and accomplish something in harmonious cooperation.”

Steve Wilhelm is editor of Northwest Dharma News. A former board member of Northwest Dharma Association, he now serves on the board of Tibetan Nuns Project. Wilhelm leads Eastside Insight Meditation in Kirkland, now online, which is affiliated with Seattle Insight Meditation Society. He’s a former journalist, and is now editing a fourth Dharma book. He lives with his patient wife Ellen, and a bemused dog and cat, in Kirkland, Washington.