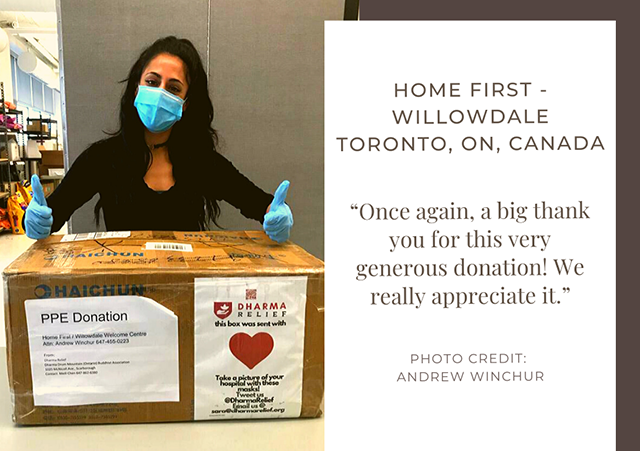 As Vancouver, British Columbia, shut down due to the COVID-19 pandemic in March, Buddhist centers across the city, western Canada, and North America turned to new ways to reach out.

Zoom of course comes to mind, and the rise of the virtual Sangha is an important and exciting story.  Another exciting success story in Buddhist outreach is Dharma Relief, an organization that came out of the Dharma Drum Mountain umbrella to purchase and distribute surgical masks to hospitals and care facilities.

Dharma Drum Mountain Vancouver (DDMV) found itself at the center of both stories, which are in fact one story.   As we withdrew from physical contact we reached out digitally, and in so doing found a silver lining in the dark cloud of COVID-19. 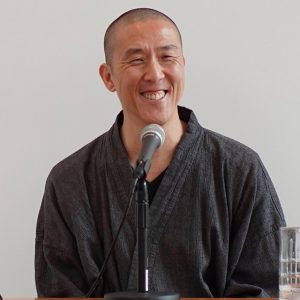 Very quickly, as lockdowns and social distancing arose here in Vancouver, Buddhist groups of all kinds started using Zoom for virtual meditation sessions.  Teachers and leaders quickly reached out to give their community support.  Tibetan, Insight, Zen and Chan; Theravada and Mahayana groups all posted online meditation sessions on their web sites.  As a confirmed early technology adopter, visiting these groups quickly became part of my ongoing routine.

To my delight, with the click of the mouse I had access to not only my local Sangha and teacher, but to others across the continent.  I soon found I was not alone. While I was virtually visiting New York, Tallahassee, Clatskanie, or Spirit Rock, others were doing the same. No matter what place I visited, I was in the company of people from around the globe. Our sense of what constitutes community was expanding.

Within our Dharma Drum community, people were connecting across former boundaries. For instance while Dharma Drum Vancouver normally services separate Mandarin and English-speaking congregations, one gentleman asked to join the Mandarin service even though he speaks English. He said he just wanted to sit with others. 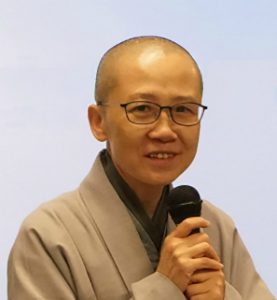 In addition practitioners from our Seattle and Toronto chapters, as well as small local sitting groups that normally do not have access to our monastic or lay teachers, were joining us online with delight. Some members who found special benefit reside hours from downtown, many in small rural communities on Vancouver Island.

“Having Zoom Sanghas to join and meditate with has supported me during COVID,” said member Nadine Pluzak. “It lessened the isolation and anxiety. It helped me significantly to respond to my job as a therapist in a remote indigenous community, with calmness and presence.’

Experienced practitioners from other traditions were visiting our Sangha as was I visiting theirs, and discovering we had so much in common. People who had never meditated or really looked at Buddhism were joining us.   It was obvious we had much to learn from each other, and through these simple acts of open communication and cooperation our local Buddhist community, and the collective community of Buddhist practitioners globally, had expanded its reach. 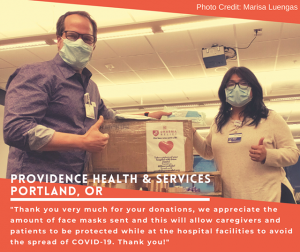 Through the Dharma Relief Project spearheaded by Guo Gu, founder and head teacher of the Tallahassee Chan center, we here in Vancouver experienced how this expanded community could directly affect the world.

Early in the coronavirus outbreak when only China was suffering, before it was dubbed a pandemic, Dharma Drum Mountain New York (DDMNY) began raising money to buy masks in China for delivery to Wuhan.  A supplier of FDA-approved masks was found through contacts in China, and began delivering masks.

The drive was so effective that as demand in Wuhan waned masks began to flow back into the U. S.  Dharma Drum Mountain New York members who owned businesses in Chicago and Atlanta used their warehouse space to store these masks, and distribution began in the New York area.

The Dharma Drum Chan meditation hall is a lonely place during COVID-19.

Guo Gu at the Tallahassee Chan center proposed that the mask drive go continent-wide.  With the blessings of the abbot in Taiwan,Dharma Relief was launched on March 26 with a mandate to collect $100,000, buy masks, and distribute these masks to areas of greatest need across North America.

This was far more than a small collection of volunteers in Tallahassee could accomplish.  Guo Gu mined his WhatsApp page for a core group of 11 volunteers, and reached out to his contacts as a Chan teacher and to his publishers.

On March 30 the website was launched, supported by a cross-denominational network of volunteers and Buddhist groups and Centers across North America.  By April 1, just a day and a half after the website launch, the goal of $100,000 had been met and revised to $500,000.

Dharma Drum Vancouver members have invested much in facilities, which they now can hardly use.

Venerable Chang Wu, abbess of Dharma Drum Vancouver and managing director of Dharma Drum in North America and Europe, was instrumental in organising the mask distribution.  She was able to tap connections with North American and European Dharma Drum centers, chapters, and sitting groups, and also connected with people on the ground in China and very generous donors in Taiwan.

Tallahassee-based Guo Gu said, “Dharma Drum Mountain, with the liaison help of Ven. Chang Wu in Vancouver and fellow practitioners in Shanghai, have been instrumental in getting Dharma Relief going. I’m personally grateful to all their help.”

By the end of the campaign $600,000 was raised and distribution began immediately. By mid-May 310 boxes of masks had been distributed to 173 hospitals across North America, and another 627,000 masks were handed over to disaster-relief organization MedShare for further distribution. 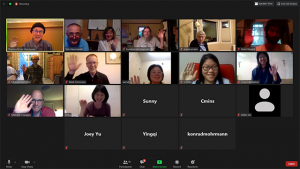 Hello from the virtual Dharma Drum Mountain Vancouver. Just a bunch of Chan practitioners from around the world hanging out.

Here in Vancouver we raised $43,640.  In the spirit of sending help where most needed, masks purchased with these donations were redirected to Toronto and Montreal, as the Vancouver situation was more stable and well supplied.

What does tomorrow bring?  We as Buddhists know all is impermanent.  This crisis will pass.  Dharma Drum Vancouver, and I’m sure many other Buddhist groups, are considering making online meditation sessions and retreats a permanent feature of outreach.  Dharma Relief is working on keeping its team together and moving on to other projects, one of which is the Evergreen Project.

Here then is the silver lining in the COCID-19 pandemic. It is the direct experience of all of us as Buddhists being part of a larger inclusive community that crosses denominations, borders, distances, race and ethnicity, language and social class.  We discovered that this community is uniquely porous, inviting, caring, and inclusive.  We discovered that by reaching out, joining together, and using tools we had at hand, we could benefit each other and the world.

0
SHARES
Share
Posted Under: 2020, Dharma In Canada, Summer
About the Author: Tom Kaczmarski

Tom Kaczmarski found Zen during a difficult time in his life in the mid-1980s in Toronto. Marriage, divorce, children and career as well as a move to Vancouver, kept him from formal practice until 2008, when he moved into the Zen Center of Vancouver, where he lived for six years.  After meeting his present wife there and moving out he has continued his practice, now in Chinese Chan, with Dharma Drum Mountain in Vancouver, where he teaches beginner meditation to English speakers.  Tom holds a bachelor’s degree in psychology, and now works as a grip in the Vancouver film industry, where he is involved in union activities.