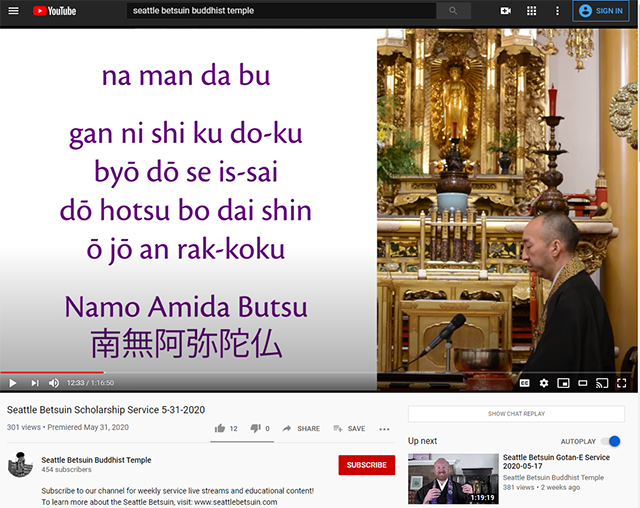 Rinban Kusunoki chanting a sutra during one of the online Sunday services Seattle Betsuin has been offering since late March.
Photos by: Joe Gotchy, Connor McKinney

In early March, the Seattle Betsuin Buddhist temple closed its doors to visitors and temple members in response to the COVID-19 pandemic.

But since March the temple has been re-opening through innovative uses of online technology, a transformational step for a traditional organization that offered its first service 119 years ago. Seattle Betsuin is the oldest Buddhist group in the city. 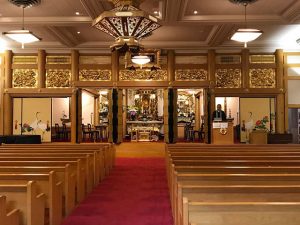 Rinban Katsuya Kusunoki live streaming one of his daily services to the Seattle Betsuin YouTube channel.

While the doors of the temple have remained closed, Seattle Betsuin has looked to open itself up in other ways.  The Betsuin adopted a “no contact” service production schedule, where recordings are done at home and shared online to a member who then edits the recordings into a service.

As the temple shifted to virtual offerings, the elderly of the temple community were a major concern. While email is a daily function for most, there are those who do not or cannot receive it, or who don’t know how to access the internet. Some did not understand why their usual Sunday routine had been disrupted and why it might never be the same. 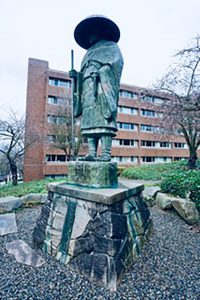 This statue of Shinran Shonin, founder of the Seattle Betsuin’s sect of Buddhism, stands across the street from the temple.

Understanding that returning to normalcy could not happen soon, temple leaders looked to utilize the technology that has slowly been adopted by the temple over the last 20 years. The temple website, email list and YouTube page have become fixtures in the lives of the Seattle Betsuin Sangha (temple community). Zoom calls and meetings have become routine as members look for ways to connect with their Dharma friends.

In response to the coronavirus we established phone trees to reach out to members who don’t or can’t check their emails. We also sent out an announcement to all members with notice of the closures and information about where updates could be found.

Reverend Katsuya Kusunoki, Seattle’s resident minister, shifted to an online service schedule, offering services almost every day via live stream on YouTube. Speaking to empty audiences is a new challenge for all religious leaders in the coronavirus digital era, but one that Reverend Kusunoki has engaged with creatively.

His new ideas included Zoom dialogues and “Minds of Ministers.”  This second was a discussion-style format, where ministers can share their thoughts and feelings with the audience on video. 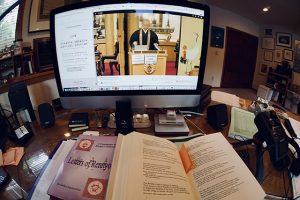 A service seen from the home of a Seattle Betsuin Sangha member.

While there is no substitute for in-person services, the temple has continued by retaining the same mission and mindset of sharing the Dharma with anyone who wants to hear it. In many ways this has allowed the community to become more open because digital can be so easy to access. While many find it intimidating to engage in something new in person, the familiar ease of clicking on a YouTube link may provide comfort to those who struggle with initiating.

As we have improved our digital skills we’ve been posting resources, services, and service materials online via multiple channels. Northwest ministers have collaborated via Zoom for major services such as the annual “Hanamatsuri” or “flower festival” service. 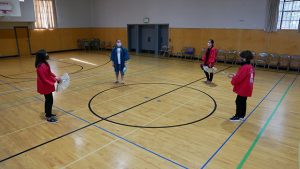 As other Dharma groups have found, the Seattle Betsuin’s YouTube page and other digital offerings have been reaching an expanding number of new people. While these are trying times, they have also allowed for a great upwelling of creativity and innovation.

As the temple looks ahead, cancelling two major events that normally attract many people has impacted the community in immeasurable ways, calling for creative new responses. 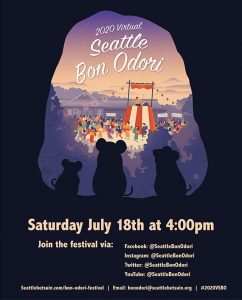 For the first time in a century, Seattle’s Betsuin’s annual Bon Odori festival will be virtual.

For instance the Seattle Bon Odori is an annual festival honoring our ancestors. Every summer hundreds of people gather on the streets surrounding the temple to dance, eat, drink, sing, and to remember those who have come before. Bon Odori is not only an important Seattle summer event, but an important cultural connection for those linked to the temple and for those who are missing loved ones.

With this in mind Seattle Betsuin has created plans to host the first-ever Virtual Seattle Bon Odori. Behind the scenes we’re planning online dancing tutorials, music, and performances, to be presented online on Saturday, July 18. While there is no substitute for an in-person event, the hope is to deliver an “as real as possible” experience for everyone who watches.

Similarly, the “2020 Women in Buddhism Conference” is now scheduled for October as an interactive video conference. Speakers have agreed to offer virtual talks on the topic of developing spiritual wellness, with a number of different perspectives and tools. 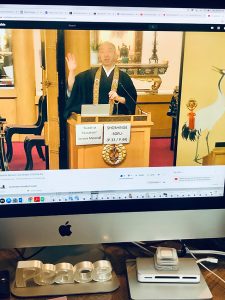 Virtual services have attracted new people, and are likely to continue in some form.

Through all this evolution, speakers and members have learned new levels of patience as they bend to adopt new technologies.

The temple community has always been the backbone of Seattle Betsuin; it has been no different during this time of difficulty. The strength, unity and understanding of the Sangha have helped the temple to flourish in new ways, while it continues to honor old traditions.

When the temple faces difficulty it continues to be the Sangha that pushes it forward, just as it has for 119 years.  As Seattle Betsuin weathers this storm it will emerge stronger, smarter, and better prepared to share the Dharma in the 21st century.

Connor McKinney is Jodo Shinshu Buddhist and a longtime member of Seattle Betsuin. He has a bachelor’s degree in business administration (marketing) from Western Washington University, and currently serves as marketing manager and head of program development at the temple.