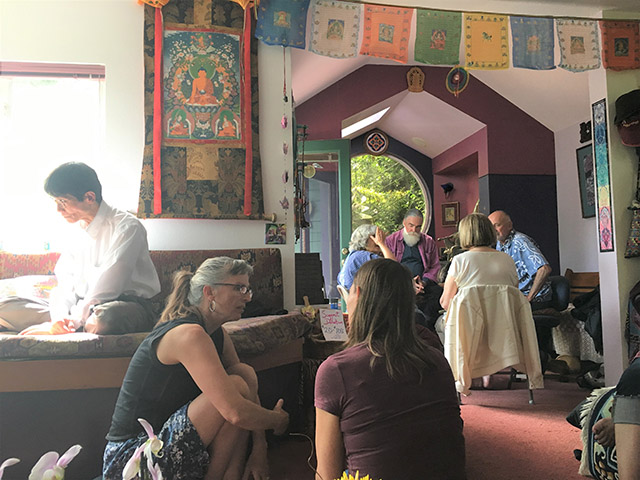 Editor’s note: Climate change and global warming may have already have crossed the threshold of no return, and Dharma teachers Joel and Michelle Levey have been exploring “deep adaptation,” as a Dharmic response to this unsettling reality. In the piece below they describe their work, much of it centered at their EcoDharma learning center in Seattle. 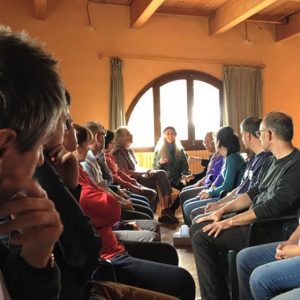 Mindfulness and Dharma practice are not for the faint-hearted – even in the best of times! It takes courage to wake up and keep our eyes, hearts, and minds wide open: open to the tenuous beauty and the raging suffering in our world, open to the profound goodness and also to grief, in response to the injustices at play in our world.

Also it takes courage to open to the tsunamis of data showing that humanity is in the midst of a growing and largely-ignored existential crisis of climate disruption, which is arriving with increasing intensity and severity decades sooner than previous assumptions and data had estimated. For us, great courage arises through faith in a multidimensional sense of refuge, and a deep dedication to realizing our highest potentials for being a force for good in our world (bodhicitta).

The All My Relations Sangha Dharma community is unique in that we emphasize developing community and the personal and collective wisdom, compassion, creativity, courage, and resilience we need, to keep our wisdom eyes and true hearts open as we step into each moment of our lives and the world. 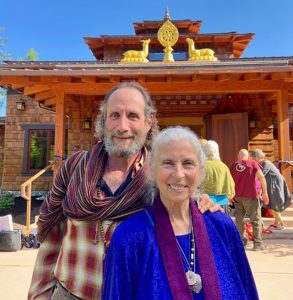 Michelle Levey and Joel Levey at the consecration of Kilung Rinpoche’s new temple on Whidbey Island, close to Seattle.

Attuned to the rapidly-escalating trends in climate and social disruption, we’ve devoted a number of months to heart-opening contemplations of the interphase of climate science and Dharma teachings and practice. This exploration has been nourished by studying Joanna Macy’s timely teachings on “The Work That Reconnects,” and Jem Bendell’s inspired Deep Adaptation community. In addition we have dialogued with colleagues in our European Learning Expedition, the Extinction Rebellion, British Parliament’s Mindfulness Initiative, and with social change leaders seeking social justice and harmony in Catalonia.

All of this work led to our first explicitly climate-centric Dharma salon entitled “Wisdom, Compassion, and Deep Adaptation for Times of Global Climate Change.” We conducted this at our Green Lake Sanctuary, a zone of peace with beautiful gardens and sacred art in in the Tangletown neighborhood of Seattle. 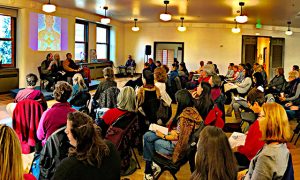 The Leveys and Kilung Rinpoche giving four immeasurables and bodhisattva teachings in Seattle.

Through meditations, videos, and teachings we explored how previous climate change simulations supported the delusion that climate collapse is avoidable, and if it happened it would likely occur in the lifetimes of our children or grandchildren. Yet many recent studies with more current and realistic data indicate a myriad of critical climate thresholds have already been exceeded, leading to accelerating climate disruption and devastating impacts on the inhabitants of our world.  Climate disruption is here, arriving far sooner and stronger than anticipated, disrupting the lives of billions of people with increasing frequency and ferocity in every region of our world.

The courageously compassionate engagement of our Dharma friends in embracing the complex mandala of these times has moistened many an eye. Our Sangha is grateful for an ongoing forum that welcomes open discussion of the profound implications of the existential threats of climate chaos, within a mandala of Dharma teachings and practices. 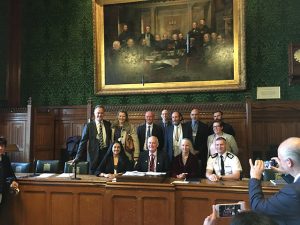 The Leveys speaking at the All-Parliamentary Roundtable at the British Parliament, for a special session on the role of mindfulness for first responders and the military.

Our experience has been that taking climate science, social justice, and the Dharma to heart supercharges our motivation to fathom the Dharma teachings and practices of mindfulness of change and impermanence, as well as refuge, bodhicitta, metta, karuna, tonglen, phowa practices for those who have died, and deity yoga. All of this leads to deeper realization of our Buddhaful clear presence, and great compassion for all. These studies also translate into embodied engagement in social, environmental, and climate activism, regenerative agriculture, human kindness, and a myriad of other noble endeavors.

We continue to explore skillful ways to weave more climate science and social justice teaching into our Dharma classes and retreats. We’re doing this with our home Sangha at All My Relations in Seattle, with other communities we work with in the U.S., Europe, Asia, and the Middle East. We also do this weaving during meditation and work parties at our EcoDharma learning center in Hawaii called Dorje Dechen Ling, which means “Land of Indestructible Blissfulness.” 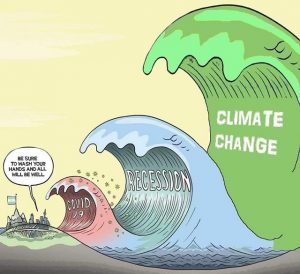 The COVID crisis has helped deepen Dharma teachings to bring greater wisdom, compassion, and resilience to embracing the environmental and social crises.

Recognizing the profound power of sacred music, poetry, visual arts, and movement in helping people embody the Dharma in inspiring ways during these times of upheaval and crisis, we have also woven these themes into our teachings and retreats with the Art Monastery Project. Recent travels and teachings opened the way for us to guide numerous adventures with Dharma friends through the thriving Dharma kingdom of Bhutan. We also visited our beloved geshema nun our Sangha sponsors at Dolma Ling nunnery near Dharamsala, India, while attending teachings with the Dalai Lama not far from there.

In our Sangha there are many tears of truth as we sit in the fire of these times. The wisdom shared by a teacher in our lineage that, “We have tears in our eyes when we are close to truth,” is frequently invoked. 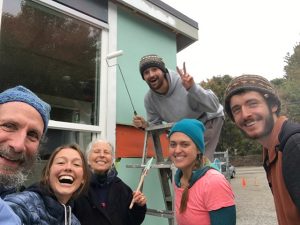 Years ago Lobsang Tenzin, a respected Tibetan yogi, visited Harvard as a contemplative science ambassador at the request of the Dalai Lama. During an interview he was asked to describe his daily meditation practice. The venerable monk, who had dedicated decades of his life to solitary contemplative retreat for the benefit of all sentient beings in a small hut in the Himalayas above Dharmsala, said he began his practice each day by contemplating the suffering of sentient beings throughout the six realms until he was moved to tears. When tears welled up and moistened his eyes, it was a sign for him that he was then ready and properly attuned to begin his formal meditation practices.

During our four decades of study with the Dalai Lama, he has taught us the highest goal of Dharma practice is to become a boundless source of benefit for all beings. The way to realize this goal, he says, is to awaken fully to our true nature. 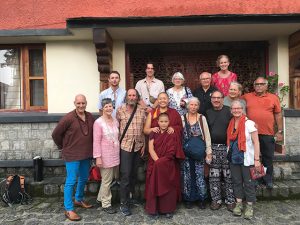 To realize our true nature we must open our hearts to boundless compassion. The way to realize such great compassion is to expand our consciousness and to open our hearts, to be resonantly attuned to the suffering and vulnerability of all sentient beings in their countless forms inhabiting many dimensions.

“In this era, to become a spiritual inquirer without social consciousness is a luxury that we can ill afford,” said Vimala Thakar, an important female Indian spiritual teacher and activist. “To be a social activist without a scientific understanding of the inner workings of the mind is the worst folly. Neither approach in isolation has had any significant success.”

In a moving interview exploring climate crisis and deep adaptation, environmental  activist and Buddhist teacher Joanna Macy emphasized how important is this moment in history.

“In Buddhafields around the universe beings are lining up to be born on earth right now,” she said. “This is a moment of such exquisite potential for realization.”

Here is an expanded  version of this article, with links, quotes, and references.

They have written several books on meditation, and are two of the first people to translate contemplative science into medicine, business, higher education, sports, and government arenas on a global scale. Joel started the first mindfulness center in Seattle in 1975, and helped launch numerous other Dharma centers in the Northwest over the years.