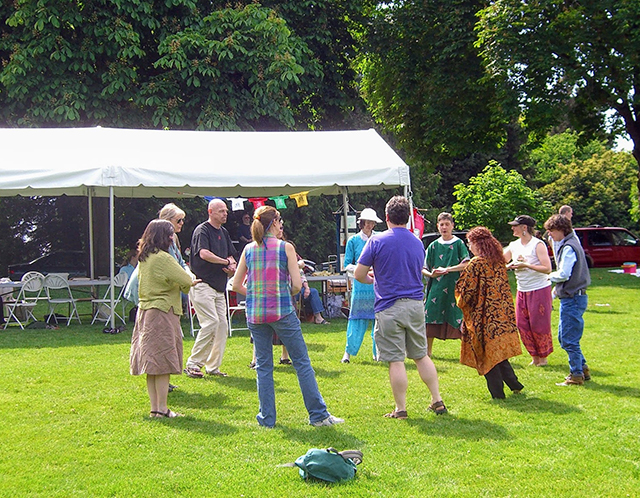 After 16 years keeping the systems of Northwest Dharma Association running smoothly, Timothy O’Brien is moving on to new horizons.

His years with the association started somewhat by accident in 2004, after Timothy moved back to Seattle after sojourns in Europe and Montana. He started a bookkeeping business, and thought the Northwest Dharma News would be the perfect place to advertise.

Timothy called the office and met with David Forsythe, then a long-term NWDA volunteer. David encouraged Timothy to consider NWDA’s volunteer opportunities, and Timothy thought helping out a bit at the office would be interesting. 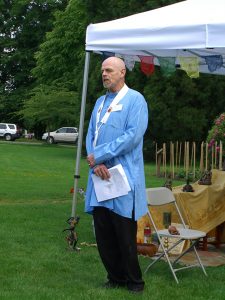 Timothy wearing his vestments at a Buddhist festival.

Long-time NWDA contributor Joe Pearl described it this way: “To  the best of my memory (which is, perhaps, not as good as it used to be), I first met Timothy at the old Seattle Center office, where Timothy came on as executive director to relieve the burden on David Forsythe, who was pretty much running the office at that point.”

Joe also remembers Timothy’s boundless energy and enthusiasm and his commitment to service.

“As someone who is quite reticent, I very much appreciated that Timothy never lacked for something to say. When I served on the NWDA Board, I saw that the ease with which he expressed his views served him in providing a focus and direction for a quite large and somewhat-unruly group of board members.” 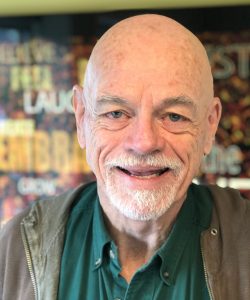 Timothy is known among friends for his series of photographs, taken from his Seattle apartment balcony, emailed out with poetic names such as “Off in the Distance,” “In the Placid Heavens,” “Aglow, “The World Above Us,” and “Late Spring Pastels.”

“More recently, both Nancy and I have very much enjoyed the lovely photos of the sunset from his balcony that he sends out periodically,” Pearl said. “Those too, I think, reflect his spirit of service and general enthusiasm for life.”

Timothy is a long-time avid gardener and family man, and always seemed to be creating a new garden wherever he was. He’s close to his son and grandchildren in Kentucky, and travels to visit him whenever he can.

Timothy has brought his business and project management skills to many organizations and projects. He’s been a major promoter of the Speaking of Dying film and workshops, and has taken on several gigs with Companis, which creates healthy communities by fostering skilled volunteer service. Most recently Timothy jumped in as project coordinator for the Reunion Project Seattle 2020, an association of long-term survivors of HIV, until it was put on hold because of the COVID pandemic. 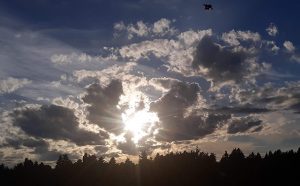 Timothy often uplifts friends with his series of balcony photos.

Timothy’s Dharma history is deep and long. He began Buddhist practice at the San Francisco Zen Center in the 1960s. Later he became a member of the Triratna Buddhist Order (formerly known as Friends of the Western Buddhist Order).

George is already plotting how to get Timothy to come back to take on just some small projects. After a reasonable break, of course.