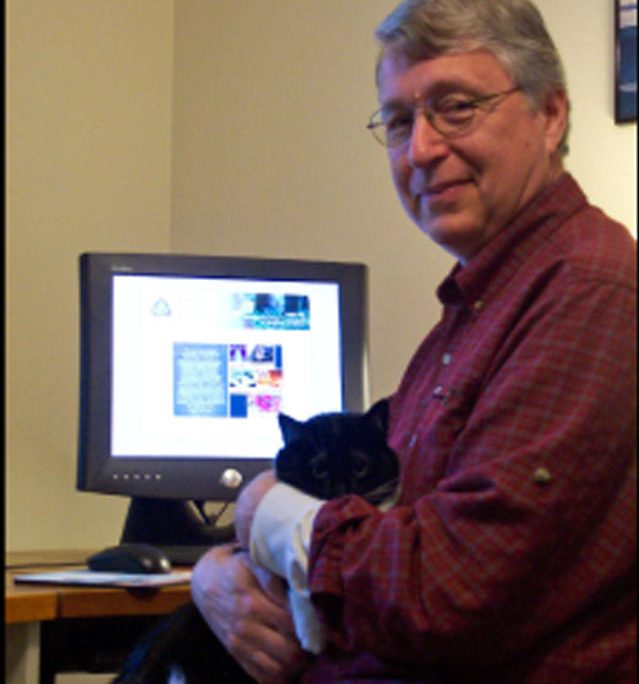 David was a great lover of cats…and they loved him.

For the past several years NWDA has been re-visioning and planning for the transition to a new generation of Dharma leaders and association volunteers. If it hadn’t been for David’s vision and skill, the organization might not have survived long enough to make those transitions.

David came to Seattle from upstate New York, where he’d been managing online library catalog systems. He began volunteering for NWDA in 1996, and was unfailingly enthusiastic about rolling up his sleeves and taking on whatever tasks needed doing next. 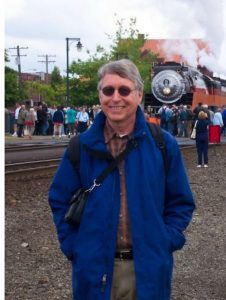 David loved trains, and volunteered every week at the Centennial Amtrak station in Lacey, Washington.

He was an envelope stuffer at mailing time, a newsletter sorter when it was publishing time, and a bookkeeper and accountant when it was tax time. By 2001 he was serving as office manager, and continued in that role until recently.

David also served on the board of directors from 1998 to 2006, helping guide the association through multiple changes and challenges. His calm and friendly demeanor hid an acute intelligence and steely resolve.

More than one person recalled that when a lot of things got done, and a lot of people pitched in, David had been quietly working to get people on board. Also a peacemaker, he helped mediate more than one difficult conversation between people, by reminding them of their common intentions and humanity.

As David retired from NWDA he and his wife Kathy moved to the Panarama Retirement Community in Lacey, Washington. But he had a few more projects to get done. He led the reorganization and remodeling of the Panorama library. He hosted and managed meditation retreats taught by Daeja Napier, Leigh Brasington, Ajahn Geoff, and other teachers.

David also volunteered every week at the Centennial train station in Lacey, Washington — the only Amtrak station in the nation operated and built entirely by volunteers. 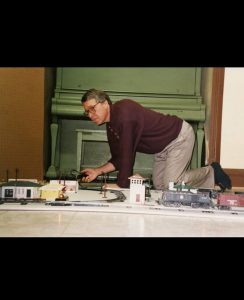 After a career in librarianship, David rebuilt the library at the Panorama community.

Here are a few comments by NWDA volunteers:

“I met David volunteering for the Northwest Dharma Association, and watched him steer the organization while running the office, for years. I’m really sad to lose David. His warm friendliness and quiet dignity was a great inspiration to me and so many others. His steady encouragement and wise counsel will be missed.”

“David exemplified for me what Dharma practice truly means. With his peacefulness, equanimity, pragmatism, and gentle good humor, he served as a role model. I cannot overstate how much I will miss him.”

“David often seemed a river of kind equanimity, and humility. I can think of few people who did so much for others, so invisibly. Always he continued, with a gentle warm twinkle in his eyes. The world is a little poorer that he’s gone, and was richer while he was here. I miss him already.”

“A lover of trains, cats, and, of course, the NWDA. A man truly after my own heart. He will be sorely missed, but never forgotten.”

“I met David over 20 years ago, shortly after I moved to Seattle, when I began volunteering for the NWDA. He was always model of Dhamma practice for me, generous and kind, and grew to be a good friend.” 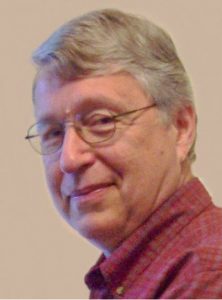 David was a kind man with a twinkle.

Beloved husband, brother, uncle and friend, David will be remembered as a librarian extraordinaire. He grew up in western Pennsylvania, attended college at Muskingum University in Ohio, and earned a master’s degree in library science at the University of Illinois at Urbana-Champaign. He worked in college and university libraries and, through library networks, helped libraries to automate.

David loved trains and rode many in the U.S., Canada and Europe. A cat lover since a child, there were many furry companions along the way. He loved acapella choirs, organ music, and cathedrals.

David is survived by his wife, Kathleen Forsythe of Lacey, Washington; sister, Jean Keys of Murrysville, Pennsylvania; brother, Bud Forsythe of Seattle, Washington; and many nieces and nephews. All are going to miss his gentle spirit.

At David’s request, there will be no service.

Condolences can be posted here at the Funeral Alternatives of Washington website.

Memorial donations may be made to the Panorama Library Association, 1751 Circle Lane SE, Lacey, WA 98503.