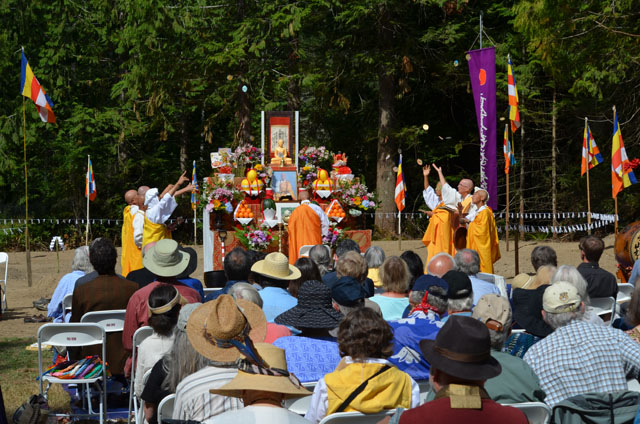 In August people traveled from across the U.S. and Japan to Poulsbo, Washington, to celebrate the ground purification ceremony for what will be the first peace pagoda on the West Coast by the Nipponzan Myohoji Order.

The 150 attending the ceremony witnessed a living prayer for peace; with a soft breeze moving the many colorful flags, and sunlight illuminating the grass, the trees, and the opened earth for the peace pagoda. The pagoda project is being led by Nipponzan Myohoji Buddhist nuns, monks, and their supporters.

The plans for the peace pagoda, approved by Kitsap County and courtesy of local stupa architect John Paul Jones, who is native American.

The ground purification ceremony or Jichin-sai, is a traditional Buddhist and Shinto ceremony asking permission for construction from the local guardian god. The ceremony also is intended to purify the building site.

The ceremony and pageantry provided a sense of safety and protection at the site, just a few hundred feet from a U.S. Navy nuclear weapons facility. During the ceremony participants could hear the echo of gunshots from a nearby firing range.  The significance of this sacred place, at this time, was felt by all.

The Pacific Northwest Peace Pagoda is a Buddhist stupa that seeks to unite all sentient beings, regardless of race, creed or nationality, in the universal aspiration for genuine world peace.  The peace pagoda is inspired by traditional stupa designs, reflecting the original Indian style of a dome-shaped building topped by a spire.  It will be approximately 32 feet in diameter at the base and about 30 feet tall.  As with many stupas built since the time of Buddha Shakyamuni, the peace pagoda will entomb his relics. 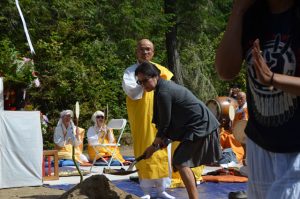 Lani Kawasaki wields a shovel at the ground-breaking ceremony, with support from Rev. Utsumi Gyoshu from the Great Smoky Mountains Peace Pagoda, under construction in Tennessee.

Rev. Senji Kanaeda, a Buddhist monk and much-beloved peace activist living on Bainbridge Island, and Rev. Gilberto Perez, also a monk, are leading in the construction of the peace pagoda.  Reverend Kanaeda has organized numerous peace walks each year, and provides much support to local and international peace activists and peace programs. Both monks live at the beautiful Nipponzan Myohoji Bainbridge Island Temple, located west of Seattle across Puget Sound.

The peace pagoda will be built with labor and funds from supporters of the Nipponzan Myohoji Order.  Ground Zero Center for Nonviolent Action, an organization opposed to nuclear weapons, will work soon to establish some type of easement to ensure that Nipponzan Myohoji Order members will forever have access to the property.  Likewise, Ground Zero would like to ensure that the property will always be open to the public. 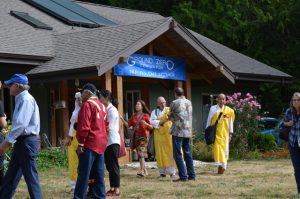 Entrance to the house belonging to Ground Zero Center for Nonviolent Action.  Rev. Senji Kanaeda is the Buddhist monk on the right.

When completed the Pacific Northwest Peace Pagoda will stand at nearly the exact location as an earlier pagoda started in 1982, about 110 feet from the property line of Naval Base Kitsap-Bangor.  The base is the location of eight Trident nuclear missile submarines, and the largest concentration of deployed nuclear weapons in the United States.

The Nipponzan Myohoji Order, devoted to the teachings of the Lotus Sutra as presented by the Japanese Buddhist priest Nichiren (1222-82), was founded in 1917 by Nichidatsu Fujii.  At age 32, following much study and severe ascetic practice, Fujii arrived at the realization that his mission — to spread world peace — would be best accomplished through the practice of beating a drum and chanting Na Mu Myo Ho Ren Ge Kyo.

When Nichidatsu Fujii first received Buddha relics in 1933, he vowed to build stupas in Japan and around the world for the sake of world peace.  After the devastation of Hiroshima and Nagasaki by atomic bombs, Fujii in 1954 realized his vow with the dedication of the Hanaokayama Peace Pagoda in Japan.

Since that time more than 80 peace pagodas have been built around the world by Fujii and the Nipponzan Myohoji Order. 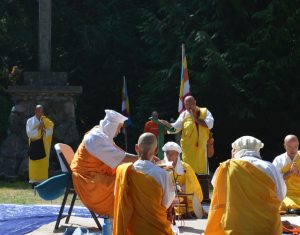 Rev. Imai Gyoko, of Japan, reading with Rev Gilberto Perez at the lectern and Rev. Senji Kanaeda near the Gendai Hoto.

In 1977 the Ground Zero Center for Nonviolent Action was formed, on 3.8 acres adjacent to the Trident submarine base at Bangor, Washington.  Soon after Nipponzan Myohoji monk Katsumi Suzuki visited Ground Zero, and there learned of Ground Zero’s work for peace.

On November 4, 1980, Nipponzan Myohoji founder Nichidatsu Fujii visited Ground Zero and proposed that a peace pagoda be built there.  Fujii said it would commemorate and support people being jailed for peace.

Construction of the peace pagoda began in 1982, only to be met with legal challenges during the permitting process and in the courts.  On May 28 of that year a geodesic dome at Ground Zero, containing a statue of the Buddha and a crucifix, was burned to the ground.

“The peace pagoda that we attempt to erect at Ground Zero is a reflection of our ardent wish to eliminate nuclear weapons.  Its erection is a direct challenge to the power and authority that has established a nuclear submarine base,” Fujii said that June. “Time will eventually come when the government will be compelled to admit the wrong. We shall wait.” 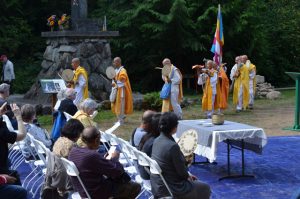 Rev. Senji Kanaeda leads the monks and nuns in a formal procession called a Gyodo.

In February 1985, the Kitsap County Board of Commissioners issued a final decision against the peace pagoda.  By then construction of the pagoda had stopped years before, and the dream was put on hold.

In July 2003, Rev. Senji Kanaeda moved from Japan to the Nipponzan Myohoji Temple on Bainbridge Island and revived the dream of the peace pagoda.  However discussions were cut short by a 2005 fire that destroyed the Ground Zero house.

On April 4, 2015, Ground Zero members renewed their support for the new peace pagoda design and construction on Ground Zero property.  On May 17, 2019, Kitsap County approved the permit for the Pacific Northwest Peace Pagoda. 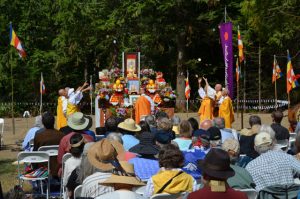 The peace pagoda will be built behind this altar. The metal fence in the back marks Naval Base Kitsap-Bangor, location of the largest number of deployed nuclear weapons in the U.S.

Winning permission from the county required profound patience.  Both the Nipponzan Myohoji Order and Ground Zero had endured much hardship with the rescinding of the building permit in 1982, even after much of the peace pagoda had been built; with the arson fire and destruction of the Buddha statue and the crucifix in 1982; and with the protracted legal dispute with Kitsap County.

It is our greatest wish that the presence of the Pacific Northwest Peace Pagoda will grow in the hearts of all peace-loving people in the U.S. and across the planet. Pacific Northwest Peace Pagoda will be the first Nipponzan Myohoji peace pagoda on the U.S. West Coast, and likely the first to be built on land owned by a peace community other than the Nipponzan Myohoji Order.

Please keep our efforts for a Pacific Northwest Peace Pagoda in your thoughts.  Please join us when you are able, either at the Nipponzan Myohoji Bainbridge Island Temple or at Ground Zero Center for Nonviolent Action.

On April 8, 1982, The Most Venerable Nichidatsu Fujii said:

“There are limits to the enforcement of policies that aggravate the arms race.  However, people’s aspiration toward peace is boundless.  Violence of the authority might temporarily gain victory.  Yet it is nothing more than a springtime dream.  The life of religion, the foundation of all non-violent movements and the creation of peace, is infinite.

We shall meet any kind of hardship thoroughly by our unshakeable spirit of perseverance, and await the coming of spring, the time of blossoming.”

Glen Milner lives in Lake Forest Park and is a member of Ground Zero Center for Nonviolent Action.  He identifies with the Society of Friends.