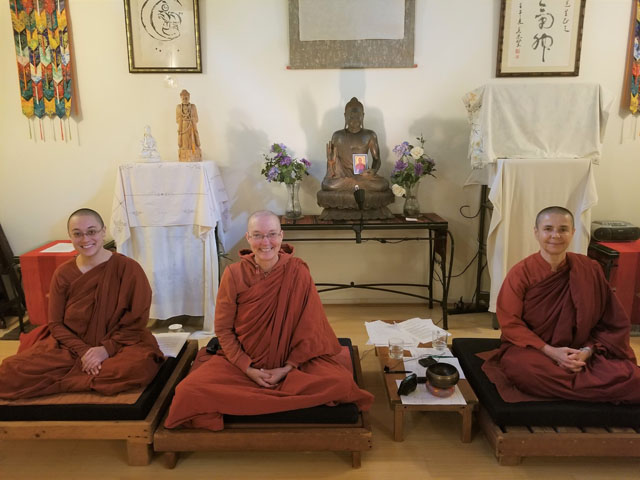 Cloud Mountain, a non-sectarian Buddhist retreat center in Castle Rock, Washington, has been serving the dharma since 1984 by offering residential meditation retreats.

Cloud Mountain Executive Director Laura Hauer said the core of the Nuns Initiative will be inviting bhikkhunis and ex-nuns to lead retreats at Cloud Mountain. 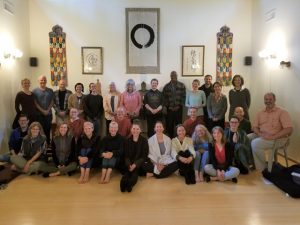 A group photo of the inaugural retreat at Cloud Mountain.

“These women have been a woefully-underutilized resource in modern Dharma in both the East and West, and it is my intention to help change that by bringing their voices to the forefront at Cloud Mountain,” Hauer said. “A major part of the Nuns Initiative is to provide a forum for the extraordinary depth of realization and understanding that exists within the women’s monastic and ex-monastic community.” 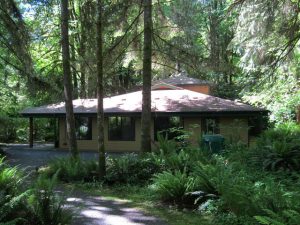 Cloud Mountain’s Diamond Hall is the center of most retreats there.

In recent years Hauer has grown concerned about preserving the depth and breadth of the Buddha’s teachings in light of the growing mindfulness movement, and trends toward psychologization, secularization and politicization of Buddhist teachings. She sees a steady loss of quality among those being trained as lay teachers in the American insight tradition, inhibiting her ability to offer retreats that honor the full depth and breadth of what the Buddha taught.

Hauer has also been troubled and frustrated by the sexism and misogyny she observes from her vantage point in the Buddhist community. Through the Nuns Initiative she hopes to address these concerns.

Another feature of the initiative is fundraising to provide financial and material support to the nuns and to their young but growing communities.

“It’s a relatively recent phenomenon that women have resumed taking full bhikkhuni ordination in the Theravada tradition,” Hauer said. “There is a very high degree of sexism and outright misogyny not only among Asian bhikkhus (monks), but also, surprising to some, among Western monks too. Bhikkhunis are struggling to establish nunneries, so part of the initiative’s intention is to provide material support for fledgling bhikkhunis communities in the U.S. and abroad.” 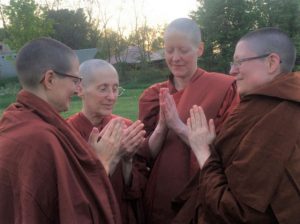 Ayya Medhanandi and the bhikkhunis of Sati Saraniya Hermitage in Canada.

Another aspect of the Nuns Initiative is to strengthen the influence of the entire monastic community.

The Buddha taught the importance of maintaining the fourfold Sangha made up of bhikkhunis, lay women, bhikkhus and lay men. But Hauer points to a serious imbalance within Western Theravada Buddhist culture, with the emphasis on and support for lay teachers far stronger than for monastics of any gender.

Jo Marie Thompson, co-founder of Kevala Retreat, a dana-based Dhamma refuge in Wisconsin, was an early collaborator with Hauer in the development of the Nuns Initiative.

“The historic lack of support for women monastics has been a painful awareness to live with during my years of Dharma practice,” Thompson said. “The Nuns Initiative at Cloud Mountain has filled my heart with warmth, gratitude and an increasing sense of wholeness in our stewardship of the fourfold sangha.” 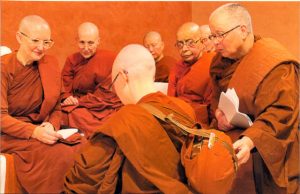 Nuns also are very supportive of the Cloud Mountain initiative.

“It is very heartwarming and encouraging to see more and more lay practitioners stepping up to actively support fully ordained nuns, and thereby helping to fulfill the Buddha’s vision of a fourfold Sangha of bhikkhus, bhikkhunis, laymen and laywomen,” said Ayya Santacitta Bhikkhuni of Aloka Vihara in Placerville, California.  This nunnery just celebrated its 10th anniversary.

The Nuns Initiative was formally announced in June 2019. Since that time 82 individuals and three

Each bhikkhuni and ex-nun invited to teach at Cloud Mountain this year was offered an additional $2,000 from the fund to sustain her community, above and beyond the dana offered to them by retreatants. An additional $8,100 was recently donated during Kathina, the monastic season of offering, to a variety of bhikkhuni communities in the U.S. and across the globe. 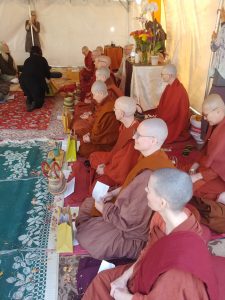 “The monastic order, as steward of the traditions, plays an important role in maintaining balance within the teachings,” she said. “Every culture that has ever encountered Buddhism has shaped and molded it to greater or lesser degrees to its own cultural values.

“For us in the West, that adaptation includes a heavier emphasis on householder practice than on monasticism. Having a healthy, strong monastic presence and influence acts as a counterbalance to the excesses to which our culture is capable of taking the Dharma, including but by no means limited to consumerism, commodification, pseudo-professionalism, or mindfulness-based-just-about-everything.”

The Nuns Initiative is also intended to address a problem Cloud Mountain has been grappling with for years: ensuring that the retreat center continues to offer Dhamma practice led by those whose depth of realization renders them truly qualified to guide others on the path. Because of the ambiguous effectiveness and troubling aspects of both established and newly developed “teacher training” programs, Cloud Mountain is looking more and more to monastic practitioners to hold the depth and breadth of the Buddha’s teachings.

Beth Coyote, a Seattle midwife, poet and Buddhist leader, is a strong supporter of the Nuns Initiative. 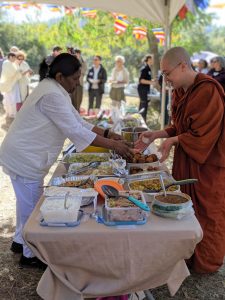 “In the West, most of us students have studied primarily with lay men and women. It is rare to be taught by monastics,” she said. “The nuns I have sat with have been so clear, kind, and simple in their teachings. They embody the Dharma in a way I have not experienced with lay teachers, no matter how skillful. By their example they teach the lay community to live happily with little. So valuable!”

Hauer’s future plans for the Nuns Initiative are varied. At its core are continued, annual invitations to bhikkhunis to teach at Cloud Mountain, and offering continued financial support.

“My priority in this is to offer practitioners opportunities for deep Dharma practice guided by qualified teachers,” Hauer said. “Regular teaching invitations are also important to the bhikkhunis. On their retreat this past summer, several of the bhikkhunis we hosted affirmed how helpful consistent teaching invitations are in their ability to support their nuns’ communities.”

Cloud Mountain aims to offer three to four retreats annually led by bhikkhunis and ex-nuns. In her future scheduling Hauer also intends to offer teaching invitations to monks, focusing on those who support the legitimacy of bhikkhuni ordination, and who fulfill the traditional duties of bhikkhus toward bhikkhunis. 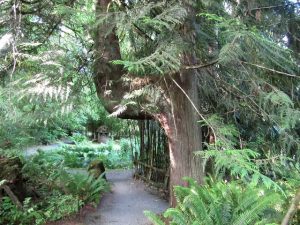 One associated initiative project will be developing a curriculum for dhamma study for experienced women practitioners, to be led by the bhikkhunis in a retreat format at Cloud Mountain. In addition a letter-writing project will shortly begin through which individuals can offer gratitude to bhikkhus who have actively supported bhikkhuni ordination, and can open dialogue with monks who do not yet support women’s full ordination.

Cloud Mountain will continue its ongoing fundraising efforts on behalf of the nuns and their communities. Anyone wishing to support the Nuns Initiative can do so through the donation form on Cloud Mountain’s website.

Bhikkhunis of the Sati Saraniya Hermitage, guided by Ayya Medhanandi Bhikkhuni in Ontario, Canada, expressed the impact of the Nuns Initiative to its supporters.

“We give thanks for your noble commitment to raise awareness and support the growth and sustainability of the bhikkhuni sangha in this new millennium,” they said in a statement. “Although we face many challenges in preserving a female monastic presence for Theravada women, your generosity, supporting initiatives and faith in our dhamma work really inspires us.”

Laura Hauer serves as executive director of Cloud Mountain Retreat Center, where she has supported the Dhamma for nearly 25 years in various capacities.