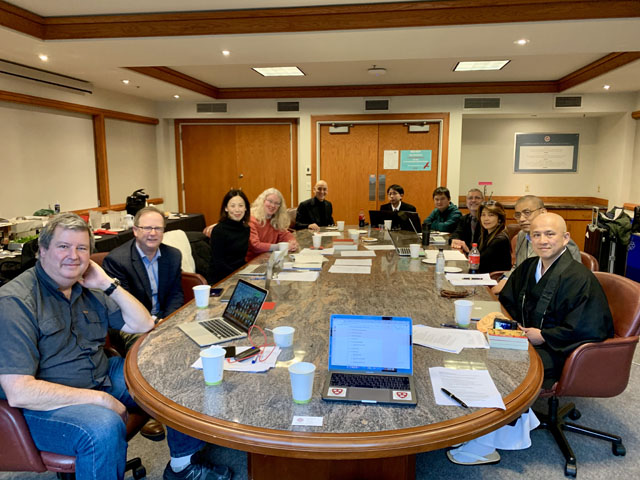 The first academic conference between Shingon Buddhists and Catholics on the letters of St. Francis Xavier, drew people from the United States and from Japan.
Photos by: Taijo Imanaka

Academic and religious leaders from Japan and the United States met in Seattle this fall, for the first academic conference between Shingon Buddhists and Catholics.

The scholars met at Seattle University in November, to consider St. Francis Xavier’s letters about his Christian missionary work in Japan. 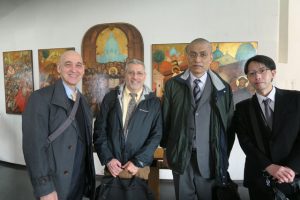 “The encounter (between these religions) has in an important sense not yet happened,” said Thierry Robouam, a Jesuit from the Japanese province of the Society of Jesus, who attended the conference. Robouam is the only Jesuit in the world who is also an ordained Shingon monk.

St. Francis Xavier, one of the first Jesuits, arrived in Japan 470 years ago hoping to convert Japanese to Catholicism. While he initially succeeded in his missionizing, within a century Japan closed its borders to foreigners and actively persecuted Christians. 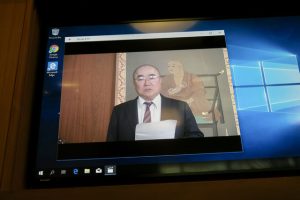 The film “Silence,” based on Shusaku Endo’s novel, explores the failures of Christian missionaries in Japan.

The academic researchers from Seattle and Japan believe the subject is important for furthering Buddhist-Christian dialogue between Seattle University and Koyasan University.

Xavier’s letters expressed a passionate motivation to glorify God and to save the souls of people he called “pagans” and “barbarians.” He believed their immortal souls remained captive to the “devil” and the dangers of eternal damnation. His aim in engaging with Buddhism was clearly not interreligious dialogue as we consider it today. 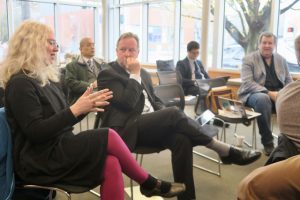 The academic conference was open to people from Seattle University and Seattle Koyasan, and to the public. Opening events at Seattle Koyasan drew about 25.

The atmosphere included intense academic rigor and reflective contemplation. Many participants were filled with new energy to further their research and deepen collaborative relationships.

We concluded with plans to host Zoom meetings once a quarter, on diverse topics from studying mandalas to viewing and analyzing the film “Silence.” Seattle University faculty will travel to Japan in early September of 2020 for another conference. The researchers will all contribute scholarly articles to an academic journal by the spring of 2021. 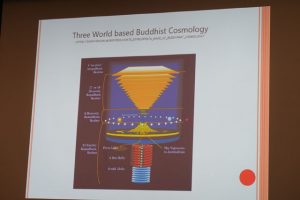 The first day at Seattle University opened with research presentations by professors Sato and Robouam. Taijo Imanaka, head priest of Seattle Koyasan, interpreted with assistance from other Japanese-English-fluent participants. The demands of interpreting for a non-professional interpreter made for some challenges, but also slowed the process and fostered patience and reflection.

Those attending sat in circles of chairs instead of in rows facing a stage, to better engage with one another.

Participants attended the noontime mass at Seattle University’s beautiful Chapel of St. Ignatius. There presider Fr. David Leigh welcomed the conference on Buddhist-Christian dialogue, and invited prayers for our work. 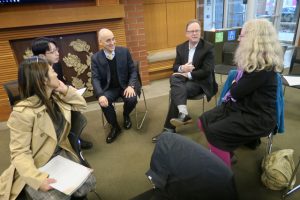 The conference generated many animated discussions among the participants.

The next day participants took turns reflecting on the previous day’s event, and the Seattle University professors shared their research projects.

“I have been a sangha member at Seattle Koyasan just long enough to know that there is room in Shingon for many roads to the single flowering of our true nature as part of the divine,” said Seattle Koyasan member Paul Francke, about the opening ceremony. “This is a tradition that accepts that ‘skillful means’ can involve syncretism, and this fact goes back to Kobo Daishi’s time. So it felt natural for our temple to kick off this conference on Buddhist-Christian dialogue.

“Father Thierry’s introductory speech echoed my experience perfectly. For some of us, hyphenation (Buddhist-Christian, Buddhist-Jewish, Ryobu-Shinto, etc.) is the beginning of a process in which labels, or words for that matter, eventually make no sense,” said Francke, a former Quaker pastor, now a hospice chaplain. 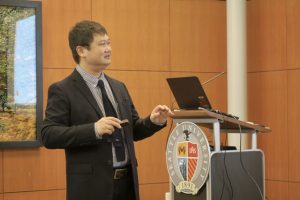 “This event was an excellent way to develop comfort with this dialogue, which should be more and more a part of our culture with every generation to come,” he said.

While research and practice on Buddhist-Christian dialogue has been developing for some time, little if any engagement has happened between Shingon Buddhism and Christianity.

However Catholic scholars have been engaging with counterparts in Tibetan Buddhism and Japanese Zen Buddhism.

Shingon Buddhism is one of two major vajrayana sects in Japan. Shingon is centered on the sacred mountain of Koya in southern Japan. Nearby Koyasan University, with roots back to the 9th century, is dedicated to Shingon Buddhist studies. 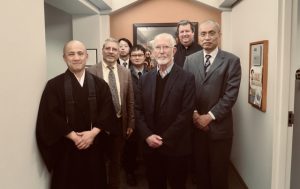 The inspiration for this proposal came after Koyasan University decided to add St. Xavier’s letters on Japan to the Koyasan Archive Project. Xavier had mentioned Mt. Koya (Koyasan) explicitly in the letters, and subsequent scholarly footnotes indicate that he had engaged with some Shingon monks whose lineage stems from Koyasan.

St. Francis Xavier’s letters on Japan serve as the departure for this research project. Xavier’s numerous letters open a fascinating window onto the colonially-driven missionizing project of his time, as well as on the spiritual combat in the Spiritual Exercises of St. Ignatius, central to Jesuit spirituality.

Xavier’s missionizing presence in Japan set up a certain trajectory of possibilities regarding interreligious engagement in Japan. Seattle University faculty learned from their Japanese colleagues that while Xavier’s mission in Japan and Asia has been strongly significant for Christians, Japanese scholars have not considered it worthy of research.

Interreligious dialogue is less important in Japan than in the United States. Seattle Koyasan Buddhist Temple and Seattle University scholars are helping to change that, as we prepare for the next conference in Koyasan, Japan.

Jessica Ludescher Imanaka, PhD, is an associate professor of management and philosophy at Seattle University. She teaches courses on business ethics, spiritual business, ethical reasoning, and philosophy of the human person. Dr. Imanaka is married to Rev. Imanaka, whom she assists in running Seattle Koyasan Buddhist Temple. She coordinates the Xavier Project on the Seattle side, as the primary point person from Seattle University.

Rev. Taijo Imanaka is the head priest of Seattle Koyasan Buddhist Temple. A native of Osaka, Japan, he was ordained a Shingon monk on Mount Koya 28 years ago. He is a member of the international department of the Kongobuji head temple in Koyasan.