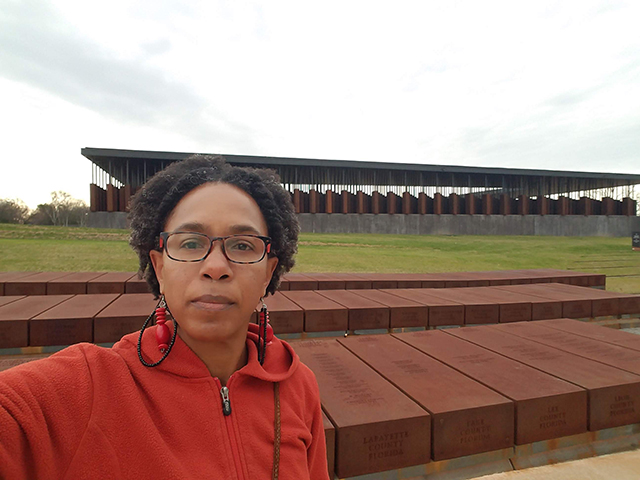 Geneviève Hicks selfie at the Lynching Memorial in Montgomery, Alabama.

The Deep Time Liberation Retreat, for descendants of the African diaspora, was cancelled due to the pandemic.  Ancestral healing would have to wait.  Visiting slave plantations with the support of Black practitioners and teachers was not going to happen.

Now I had two weeks of unplanned time off from the hospital.  I was sad to miss this retreat, and yet grateful for the respite from the current healthcare grind. 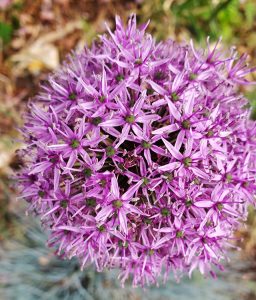 I decided to get up early every morning and walk around parts of my Seattle Maple Leaf neighborhood that I had not yet explored.  In that process I discovered Kingfisher Natural Area on Thornton Creek.  I also took a lot of pictures of flowers.

While exploring all the nooks and crannies the Kingfisher area, I found some beauty underneath the 15th Avenue NE Bridge.

The first time I visited this hideaway I was fascinated by the tunnel of windows created by the structural pillars of the bridge.  They were covered with ivy.  The green geometric configuration was stunning.

There were dirty injection needles there too, individual needles as well as neatly stacked needles.  I turned my back on the needles and focused on the beauty of the architecture and the green ivy. 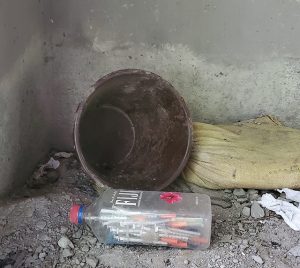 Injection needles underneath the 15th Avenue NE bridge in Seattle.

Later, I reflected on how I had turned away, turned my back to the needles.  I had been participating in an unspoken shared agreement to turn away from that which is disagreeable and inconvenient.

This is one of the many forms of spiritual bypass.

I went back to that area, this time with the intent to practice directly with that which was disagreeable.  This time I looked right at the needles and spent time in the area.  Addictions to alcohol run in my family, I could get addicted to meth or opioids.  This could be me.  But instead, I am the one who turns away.

I sent the energy of loving kindness to all those who had ever spent time under this bridge.  And I later made a financial donation to NahaanFastsFromEnglish, to support his weekly sobriety group which he offers for free. 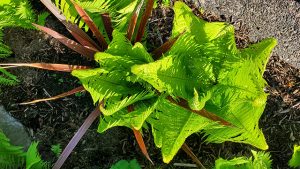 That week was the week the video of the modern-day lynching of Ahmaud Arbery was circulating on social media.  I was not going watch the video.

I’ve been to the Lynching Memorial in Montgomery, Alabama. I was not going to watch that video.

That morning, on my walk, while I was exercising while Black, a nausea passed through my whole body as I pictured Ahmaud’s killing. I wasn’t going to watch the video but I was not going to turn away. 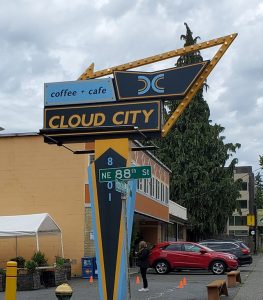 The last videos I watched were those of Alton Sterling and Philando Castile. It took me over six months before I did not experience terror when I saw a police car.  I can remember being paralyzed with fear as I walked into my neighborhood coffee shop.  There were four white police officers, coffees in hand, playing sweetly with little white children.

I backed out of the coffee shop, literally walked backwards. Sat down abruptly on the wet picnic bench near the doorway.  I started counting my breath.  The details are foggy, I remember that it was raining.  I imagine that I looked distressed.  One of the police officers eyed me sitting there through the glass door.  I stopped breathing, looked down. Started breathing again. How badly do you want that London Fog with almond milk and local lavender syrup?

The bitter taste is still in my mouth.  Like I said, I had seen enough. I’ve been to the Lynching Memorial.  I’m not watching any more lynchings.

Another early morning, I was walking downhill on a street that was empty except me and two white laborers. They were working in the front yard of an older house on the other side of the street.  One of laborers looked up and we made eye contact. I remember that I did not smile and I remember that he looked from me over to his work truck. 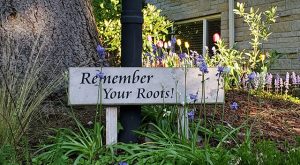 Flowers and sign in garden adjacent to Kingfisher Natural area.

I decided to cross the street and walk up hill to get a better workout.  As I passed by the house and the workers and the truck, I heard the beep of the truck’s car alarm, the doors locking.  I was furious and felt a wave of ancestral rage come up from the earth into my legs and land in my belly.  I was about to turn around and move that energy from my belly to my mouth and eyes.  About to turn back to suck my teeth and cut my eyes at him, but my practice kicked in.

It turned out that I got to start the work of ancestral healing right here, in my progressive Seattle neighborhood.  In the time since I began writing this piece George Floyd, Breonna Taylor, Dion Johnson, David McAtee have been victims of state-sanctioned violence.  There are others whose names I will never know.

Geneviève Hicks started meditating in 2002 and began a committed meditation practice in 2012 when she became a yoga instructor and started attending a weekly Buddhist Sangha.  Since 2014 she has practiced with the Mindfulness Community of Puget Sound (MCPS), which is located on the land of the Duwamish and Suquamish peoples (also known as Seattle, Washington).  She helps facilitate the MCPS People of Color Sangha, and also organizes and facilitates embodied mindful workshops and rituals for Black Indigenous and People of Color.  Healing is her passion and her wage-paying job is as a physical therapist using traditional and non-traditional modalities for healing body, mind and spirit.  When not at work, on the cushion, or holding space, she can be found backpacking, hiking or biking throughout our precious mother earth. as a way of bringing honor to her ancestors.