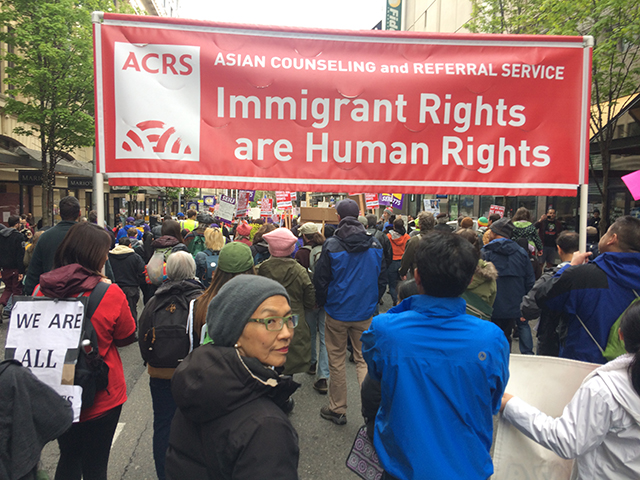 Whether family or friend, to be with Susan Kiyoko Tomita was to bask in her warmth and care, rooted in her deep meditation practice.

As Sue passed away Sunday evening, May 10, 2020, at 74 years old from pancreatic cancer, she was serene throughout.

With great forethought Sue wrote her own memorial, understanding the reality of her diagnosis, which she shared with her mother who had died years before. In her memorial Sue wrote only of her family, her love of her partner Gregory, of her sons Jason and Mizuho, and of her beautiful grandsons, Max and Julian. She also wrote about her extended family and her appreciation of her clinical team at the Seattle Cancer Care Alliance. 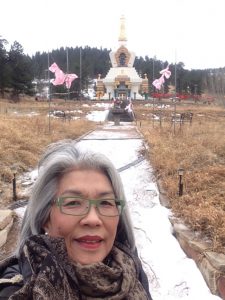 Sue loved doing extended meditation retreats in the upper floors of the Great Stupa of Dharmakya in Colorado.

Sue was such a modest, true and genuine person! In her memorial she omitted mention of her lifelong commitment to social justice, her many accomplishments, and her love of deep meditation practice. She helped so many and contributed so much to our poor suffering world!

The light of the spiritual tradition of Jodo Shinshu from her early years in Hawaii remained with her, when we met in the early 1980s. At that time I coordinated programs for the Seattle Shambhala Center and she was a participant.

She soon became a leader in the Shambhala community, based in the Tibetan Buddhist Kagyu/Nyingma spiritual wisdom traditions that arrived in the U.S. when China invaded Tibet in 1959. Shambhala pioneers the understanding that meditation in daily life is not pursued for personal purposes only, but is a way of creating a good human society. 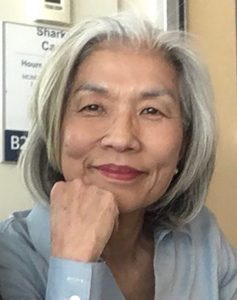 Sue at a Palo Alto restaurant.

But sometimes there can be the awareness of opening to the world beyond labels and definitions, opening to vastness, opening to non-conceptual experience. Such insight may be inspiring. There can arise the feeling of inner peace…or the sense of meaning in life…or freedom and ease…or compassion. There can arise strength of mind and heart for seeing the world as it is, but not giving up on it. These qualities can be seen as the qualities of a “practiced” or “processed” person, that is, a person softened and strengthened by the process of meditation.

It seems to me that Sue was such a “processed” person with a heart that was completely settled in favor of love and compassion in difficult times, away from fear, despair and complacency. She moved again and again to help others in material and emotional ways.

When I met Sue she was a single mother. Her son Jason was perhaps seven years old and she was a social worker at Harborview Medical Center. She was just beginning as a participant in Shambhala Training, a series of weekend meditation programs that support making meditation a part of daily life. 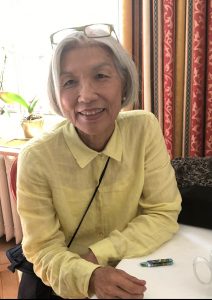 Sue often supported others at events.

I was the program coordinator. She also was beginning study, during her lunch hours, for her eventual doctorate degree in social work. Sue eventually earned the degree with a geriatric emphasis, and ended her career at Harborview as acting director of social work.

When we met, she had already co-founded Asian Counseling and Referral Services (ACRS) 10 years prior at age 27, in 1973. ACRS still exists today 45 years later with a staff of 240, providing care and a safe, welcoming space for Asian Americans in need.  Here is an ACRS memorial about Sue.

Recalls Davie Okimoto, former ACRS executive director 1976-1985, “It was her leadership in the early days, when we were at Blaine Methodist Memorial United Church, which laid the foundation for ACRS’s decades of service. She played several roles in those days, ranging from therapist to volunteer coordinator to site manager.”

Sue’s quiet dignity and vision shine through her recall of ACRS’s first days in this six-minute video.

As her Dharma practice deepened, Sue grew to become co-resident director of the Seattle Shambhala Center in the 1990s. Her co-Director Rick Gilbert remembers her: “She embodied gentle confidence and a sense of being that radiated elegance, without any pretense whatsoever. She cared not a whit for credit or attention, but was always there for people when needed.” 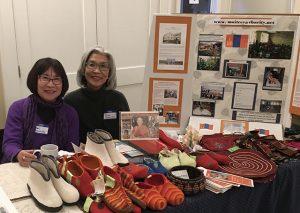 Wanting to “do more in the last phase of her life,” Sue began work with the Maitreya Charity (USA) in 2005, said board member and friend Gail Kaminishi. The charity, established by Panchen Otrul Rinpoche and supported by the Dalai Lama, creates employment for women and a sustainable future for families and children in Ulaanbaatar, Mongolia, one of the coldest and most polluted capitals in the world.

Eventually Sue joined the Maitreya board. “Sue set to work on the difficult task of writing grant proposals. Up until then we were doing small-scale fundraisers,” said Gail. “She always wanted to do more, to help single-parent households, to feed the poorest children. Thanks to Sue, we were granted thousands of dollars through grants and donations.”

A refurbished felting workshop in the Mongolian countryside will be named in her honor. The “Made in Mongolia” goods made there provide employment to women and mothers to keep their families together. Their products are sold in the U.S., the UK, Ireland, New Zealand and Japan. Donations can be made to Maitreya’s work and Sue’s passion here. 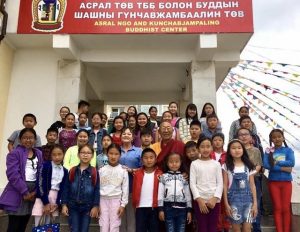 A group of Mongolian orphans supported by Maitreya Charity.

“We will miss Sue’s beautiful smile, quiet humor and presence. She had wished to join me on my next trip to Mongolia,” said Gail. “Though it will not happen, I hope to share her story with everyone there.”

Perhaps Sue never “retired” as a social worker. It is possible that the yearly multi-course birthday dinners in honor of her partner Gregory were a kind of “social work,” which benefited those of us invited. Tables put together accommodated 15 or more of us, required hours of forethought and a full day or more of preparation with Gregory enlisted as her willing worker. Gregory worked hard for his birthdays!

Their friends had only to enjoy the food and their wonderful company. They were marvelous hosts and their feasts were sumptuous! 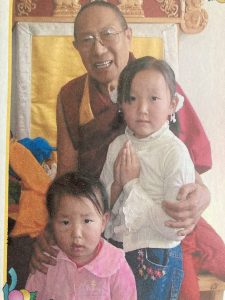 Here are some more of Sue’s qualities. She was highly principled, showing clarity of vision with broad competence aligned with a powerful intention to be of benefit to others. She was deeply serious; and when she adopted a goal she showed a strong determination to achieve it.

Sue was deeply thoughtful and incredibly generous. For instance, with each anniversary of the Hurricane Katrina-caused death of my wife’s parents, a remembrance arrived either in the mail or in person on our porch. Sue was warm and caring in person, an extraordinary listener. She always manifested a matchless capacity for loyalty and friendship!

Let the love of your family and friends guide you to a fortunate rebirth.

May we meet again!
May all beings benefit!

Ben Hines made meditation part of daily life in 1981, after becoming a student of Chogyam Trungpa, Rinpoche. He came to meditation and Buddhism from the anti-Trident nuclear disarmament peace movement in the late 1970s in the Pacific Northwest. The wisdom teachings of Buddhism based in meditation brought trust in the basic goodness of humans, and as a result his life has been deeply marked by extraordinary friendships like that with Sue Tomita. Hines is married, father of two and grandfather of three.