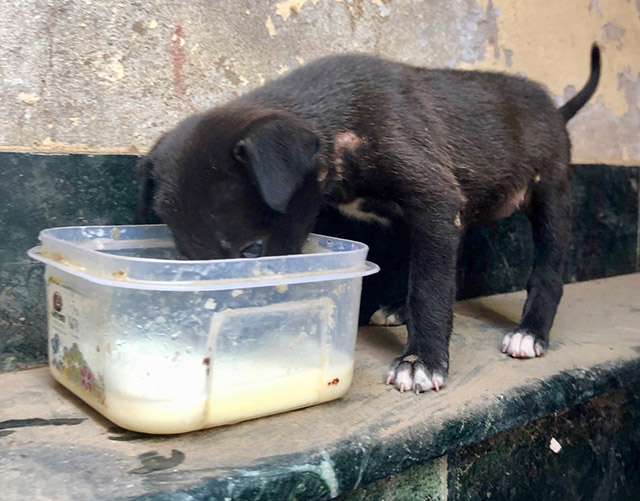 Assi minutes after Charissa Raynor found her being given nourishment by Samgeeta, who manages Aum Cafe on Assi Ghat in Varanasi.
Photos: Courtesy of Help Animals India

Charissa Raynor traveled from Seattle to the Help Animals India project in Varanasi, India, to volunteer to help all the dogs there. Except one puppy tugged hard at her heart…and she ended up bringing that puppy home.

Raynor arrived in Varanasi as an informed volunteer, understanding India is full of “community dogs” who live on the streets. These include semi-feral and abandoned strays, whom of whom are “adopted” by people in the neighborhood who feed and protect them. 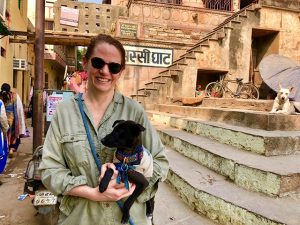 Of course Raynor named her Assi. All alone in the world she ran to Raynor and begged to be picked up right away. It was love at first sight!

India’s constitution includes this powerful message about kindness to animals:

“It shall be the fundamental duty of every citizen of India to protect and improve the natural environment including forests, lakes, rivers, and wildlife, and to have compassion for all living creatures.”

But visitors to India often experience a very different story, as street animals are everywhere and too often compassion for them is sadly overlooked.

The most common type of community dog is the Indian Native Dog. These dogs are smart and generally well behaved, but with 35 million of them on Indian streets some are loved and tolerated while many more are feared and harassed, and even cruelly killed. 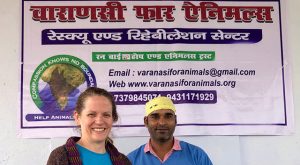 Raynor brought Assi to Dr. Deepak Singh at Varanasi for Animals Clinic, and was thrilled with his kindness and help.

Like many other visitors to India Raynor was drawn to the holy and ancient city of Varanasi, also called Benares or Kashi.  The city on the Ganges River is prominent in Buddhist scriptures as just 9 miles from Sarnath, the place where the Buddha first turned the wheel of Dharma. See this past Northwest Dharma News article about our work in Sarnath.

Help Animals India focuses on the welfare of animals in India, not on bringing animals back to the West. We would love for every animal to have a great home. We try to support animals by strengthening Indian animal welfare groups, and by educating Indian people to care for community dogs and cats and give them better futures. 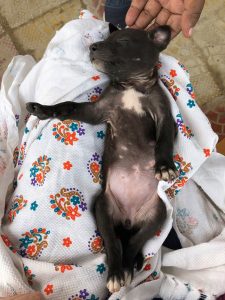 Getting a sweet rest at last after a hard life alone on the streets.

India is far away, and so many animals in the U.S. and the Caribbean desperately need good homes, so we encourage North American people to adopt animals locally.  However, when a dedicated volunteer in India just cannot leave that lonesome pup or dog to fend for themselves there, and is paying for all the transport costs, we will assist as we can.

This was the case with Raynor, who encountered a stray puppy on Assi Ghat, the most upstream of the Varanasi ghats strung along the banks of the Ganges. Raynor simply couldn’t leave this puppy alone in the world, after the puppy ran up to her and begged to be picked up. It was love at first sight!

“On November 8, 2019, I discovered a puppy lying face down crying, abandoned behind Assi Ghat in Varanasi. Locals at Aum Cafe, who were kindly giving her milk, explained this little 20-day-old baby had been dropped off from another part of town two days earlier. With no mother or pack, and no one who wanted to adopt her, the pup was destined to die.

“I called every animal welfare organization in Varanasi, but no one had puppy facilities. With less than 24 hours before my plane left for the USA, I was desperate. And, then…Varanasi for Animals came to the rescue! They answered the phone and someone said, “Just come and we’ll figure it out.” Such compassion! 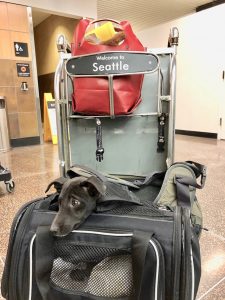 Assi taking in the new world of Seattle, after a trip around the world. She arrived just in time, because shortly after she left foreigners were banned from visiting India due to virus concerns.

“The vet at the clinic, Dr. Deepak Singh, provided the pup with medical care. He also found the most amazing foster family in Varanasi, who cared for the pup over the next few months.”

Foster care was needed because darling Assi was below the four-month U.S. Department of Agriculture age threshold for international air travel. So Varanasi for Animals found a safe home for Assi until she was old enough to fly, people who gave her medical care for months until Raynor could return.

In a few months Raynor returned to Varanasi to get Assi, just before all foreign visitors were banned from India due to the coronavirus. The fact that Assi was in Varanasi meant a 15-hour drive to Delhi to get the dog on an international flight that allowed her in the passenger section with Raynor, rather than in the cargo hold.

Raynor was overwhelmed by the love, compassion and dedication the Help Animals India team, including the foster family, had given this sweet little pup. As she traveled from Varanasi back to Seattle everyone they met felt so inspired by the story, and how against all odds Assi got a second chance at life and found her forever home.

Assi’s courage, and the love and compassion shown by Varanasi for Animals, will forever inspire us all to remember that each life counts, and that together we can make a difference for street dogs in India. But while adoption feels good, we know that the most important thing we can do to help street dogs is to expand animal birth control. Just one female dog and her offspring can produce 67,000 puppies in only six years!! Most of these puppies will suffer and die prematurely. 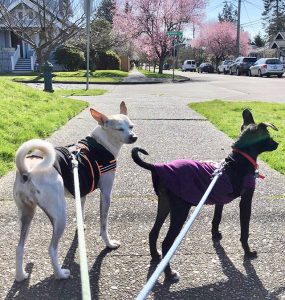 Now on the streets of Seattle, Assi is learning how to walk on her leash and to interact with U.S. dogs.

This is just one dog who needed help, but there are countless others. Won’t you help the many animals Help Animals India rescues every day?

Eileen Weintraub took Tibetan Buddhist refuge in 1976 and has been extremely fortunate to meet and practice with many of the great lamas of our time.  She is a lifelong animal advocate/rescuer, and in1998 she began supporting animal protection groups in India. During her trips to India Weintraub found many groups that were helping animals despite having few resources, so in 2008 she founded Help Animals India to give them better financial support.

Added: Because of this work Weintraub won the 2016 Unsung Vegan Heroes Award from The Pollination Project.