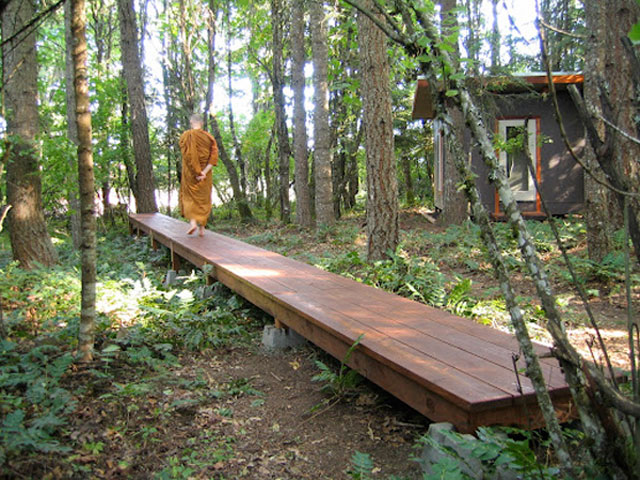 Three Theravada Buddhist monks are living from daily alms rounds just as the Buddha did, at a small monastery they’ve established outside White Salmon, Wash. 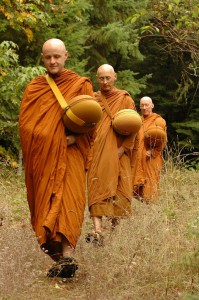 Residents of the Pacific Hermitage walking into White Salmon to accept food offerings for the daily meal. (Photo:Photo: Jay Carrol)

Pacific Hermitage was established in July 2010 by three monks from Abhayagiri Buddhist Monastery in Redwood Valley, Calif., who sought a place where three to five monks could practice and live simply in a very traditional way.

The monastery and hermitage practice in the Thai Forest Tradition of the late Ajahn Chah, a revered 20th Century meditation master from northeast Thailand, who was also the teacher of Spirit Rock, Calif. teacher Jack Kornfield.

It is unusual in the West for monks to be able to sustain themselves from alms rounds, but even though residents of White Salmon and the surrounding Columbia River communities are new to the practice, they have welcomed the monks and have embraced the ancient tradition.

The sight of monks in saffron robes carrying their alms bowls and walking along their route through town each morning is now a way of life. White Salmon, with a population of just 2,200, is on the north shore of the Columbia River, 65 miles east of Portland.

Cultivating a culture of practice, compassion, caring, and community is at the heart of the Pacific Hermitage. The hermitage is nestled at the end of a road along Burdoin Mountain, about a mile and a half walk from downtown White Salmon. 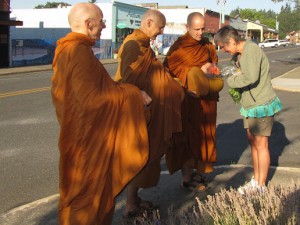 Senior resident monk Ajahn Sudanto, and Ven. Caganando, receive meal offerings and visitors at the hermitage several days each week. A small but growing cadre of volunteers participates in community work days, to help with land and property projects including building walking paths and meditation huts, clearing brush and weeding. Ajahn Sudanto was born and raised in Vancouver, Wash.

Although the Pacific Hermitage is too small to be a teaching or retreat center, the monks offer weekly teachings and meditation sessions on Tuesday evenings, and the third Saturday of the month, at Yoga Samadhi, a yoga studio in downtown White Salmon. The monks also offer monthly teachings in Portland, at times walking to the train station in the nearby town of Bingen, and taking the train into Portland. 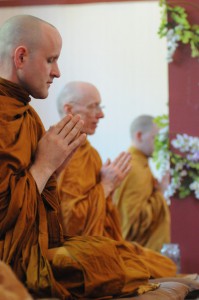 In spring 2011, the Pacific Hermitage put down even firmer roots in the Columbia Gorge when Sanghata Foundation (a kind of board of directors) acquired a property in White Salmon with ideal qualities for the monks: seclusion, pragmatic housing structures, green forest beauty, and close proximity to White Salmon. The town’s motto is: “Where the sun meets the rain.”

To purchase the five-acre property Sanghata secured a private loan, which is being paid back with the generous support of individuals interested in the continuation of the teachings and in sustaining Pacific Hermitage. More than $100,000 of the $454,000 has been raised toward paying off the loan.

Sanghata Foundation was formed in 2010 to act as stewards for the monks.

In Thai forest tradition monks cannot handle money or cultivate, cook or store their own food, so the Sanghata’s stewardship helps provide the monks with food, clothing, shelter and medicine, which allows the monks to more freely concentrate on their practice. In this way the monks are living according to the Buddhist monastic code, and can share the Buddha’s teachings with the community. 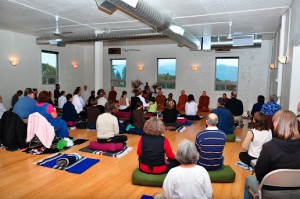 Sanghata Foundation is a non-profit 501(c)(3) organization comprised of volunteers from Portland and the Columbia River area. One hundred percent of donations to the Sanghata Foundation are used to support the monks and the hermitage.

Pacific Hermitage, Sanghata and the Portland Dhamma communities have also sponsored teachings in White Salmon with many other monks and nuns from the Thai Forest tradition. These monks have included Ajahn Sumedho, Ajahn Pasanno, Thanissaro Bhikku, Ajahn Jayasaro, Ajahn Sona and Ajahn Metta. The monks also invited Phillip Moffitt, a well-known vipassana meditation teacher and author, to teach in White Salmon and visit the hermitage.

One resident of White Salmon, Debie Garner, regularly attends the weekly meditation sessions. She said prior to meeting the Pacific Hermitage monks, her main exposure to Buddhism was hearing vague notions about karma and reincarnation. 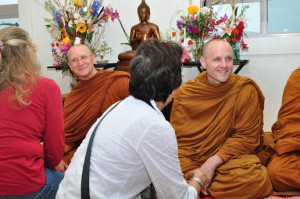 “The teachings have helped me tremendously. I’m calmer and happier. And giving alms to the monks is such a joy,” Garner said. “I’m profoundly grateful for the monks, their teachings and their accessibility. The monks and the teachings are now very much a part of my life.”

6
SHARES
Share
Posted Under: 2012, Sangha News, Summer
About the Author: Mimi Maduro
Mimi Maduro is vice chair of Sanghata Foundation. She visited the Thai monasteries of Ajahn Chah in 1987, and has been a Buddhist practitioner since that time. Mimi lives in Mosier, Ore., about 10 miles from White Salmon. She joined the Sanghata Board in January 2011. Her email is mimi@gorge.net.