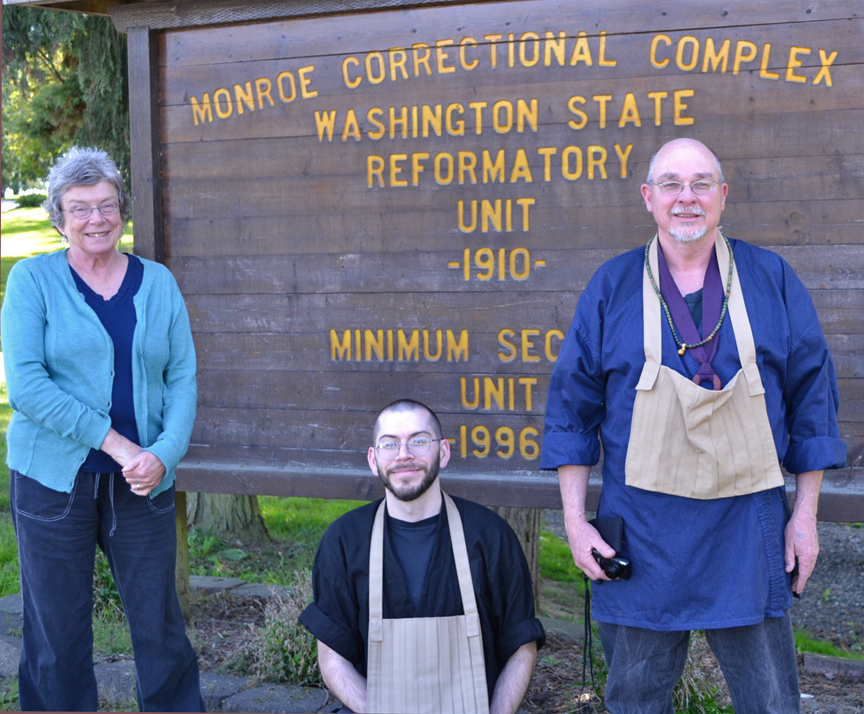 Most of us have been to birthday parties where we were told, “Don’t bring any presents – just bring yourself!” But, have you ever been to a birthday party where you had to go through a metal detector to make sure you had complied with this request?

On May 12, while visiting inmates of the Washington State Reformatory Unit of the Monroe Correctional Complex, eight of us had to be scanned before we could enter, and we had to empty our pockets and leave even our keys behind.

Traveling to the little city of Monroe, approximately 35 miles north and east of Seattle, we visited a small sangha, or practice community, of Buddhist men who were celebrating the Buddha’s birthday. This was an invitation-only event and all of the guests had to pass a security clearance, because we were visiting a sangha made up of men who are also prisoners. 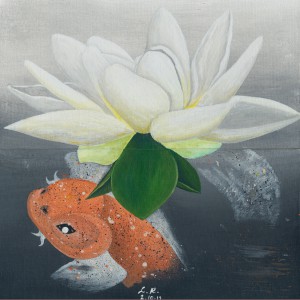 A painting of a lotus and a fish, one of several paintings by inmate Renzi Lumer that were offered to guests. (Image prepared by Caterina De Re)

The Washington State Department of Corrections allows members of each recognized religion to meet and hold regular religious services, which are generally led by volunteers from the outside. Each group also is allowed one annual celebratory service, which usually includes a special meal and entertainment, and family and friends as guests.

The Buddhist inmates usually take this opportunity to celebrate the Buddha’s birthday, often combining it with recognition of his enlightenment and death days, as well.

So on a sunny Saturday morning, we found ourselves walking up the steps of the 102 year-old prison building in Monroe. The building’s stately granite steps and columns reminded us of a state capital building, or perhaps even a temple.

The entrance hall was quiet and deserted because it was the weekend, but upstairs we were met by a few corrections officers and by the facility’s chaplain. He recognized the four regular volunteers to the prison, and greeted the additional four who had joined for the day.

After going through the security checkpoint, we followed the chaplain through a series of small rooms with heavy metal doors like airlocks, where we had to wait for the door behind us to close before the door in front of us could open.

After the last door opened, we found ourselves in a large room that looked very much like a cafeteria – the visit room. Tables and chairs filled this room, and vending machines lined one wall. Each table had a numbered sign and a list of rules for guests.

The white walls were decorated with colorful paintings of flowers, sunsets, wooded scenes and cartoon characters. These paintings were all done by inmates, and did much to cheer up what would otherwise have been a very sterile environment.

At one end of the room sat an altar, decorated with a couple of Buddhist tapestries and a small Buddha statue behind a row of offering bowls – a simple but beautiful arrangement that helped remind us why we were there.

From a guard station at one end of the room, several corrections officers waited for us to finish arriving before allowing the inmates to enter. Then through a different door about 25 prisoners, all male, came into the room one-by-one under the watchful eye of an officer. The prisoners were all dressed in button-up khaki shirts and khaki jeans, and they ranged in age from young to middle-aged. They came in talking and laughing, breathing life into what had seemed a coldly quiet institution only moments before.

Then the family members came in, about 15 mothers, fathers, wives, brothers and sisters who had traveled to visit their loved ones and celebrate with them.

After introductions and settling in, the event started with a brief meditation led by one of the volunteers, Eko Jeff Kelley of Seattle Soto Zen. He then invited to the front Susan Baldwin, wife of Lama Padma of Chagdud Gonpa Amrita, who read a letter from the lama, a 12-year volunteer at the prison who was unable to attend this year’s event.

After the reading was a group activity. Several of the volunteers had put together an18-inch tall pagoda with bamboo and wire, and they invited inmates and guests to decorate the pagoda with flowers the guests had brought. While some people made offerings others viewed a table covered with artwork done by the inmates, which included beautiful paintings and drawings, and impressive origami sculptures.

Kelley then returned to the microphone and read a modern prose version of the Buddha’s birth. He then pointed out that the now-decorated pagoda had been placed on the altar above the Buddha statue, which was now seated in a large bowl, and invited people to take time to “bathe the baby Buddha.” Throughout the rest of the event, he explained, anybody could come up and ladle sweet tea over the Buddha and recite a short gatha, or verse, of dedication.

Then came the meal, which was plentiful and served up by several of the inmates. The menu included salad, breaded fish, a tofu vegetable dish, rolls, fruit and rice; with water, coffee, tea and soda to drink. The food was delicious, and the serving and eating allowed ample time for more socializing. When mealtime began to wind down, the day’s major entertainment began – karaoke!

Some very talented men sang a number of songs, to the accompaniment of much cheering (and playful jeering) from their comrades. Several of the volunteers also mustered up the courage to sing a few songs, including a beautiful rendition of “Amazing Grace” by Amy Darling, Baldwin and Kelley.

Finally the men gave as gifts to the volunteers and family members the paintings and origami sculpture, as reflections of their gratitude. Though we had not been able to bring any gifts in return, the men assured us that our time and presence were the best gifts they could ask for, and this once-a-year event gave them the chance to really express that.

By mid- afternoon the men were called to line up to return to their living units, and the volunteers and guests filed back through security to head home.

The event was a fitting homage to the Buddha, who spent most of his life with nothing to give but his time and teachings – two wells that have yet to run dry, thanks to the dedicated efforts of the sangha.