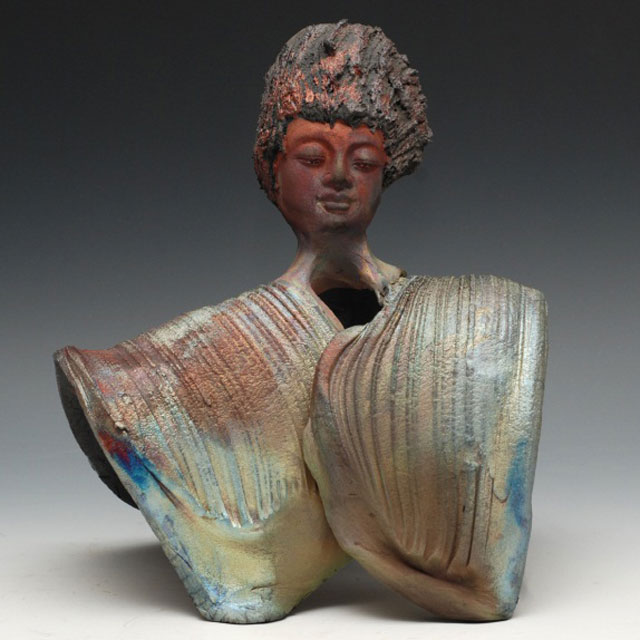 Buddha centered in the flow of time.
Photo: Anita Feng

Perhaps my work as a Buddha-maker began about a decade ago when I was in the market for a Buddha to use for a home altar. I viewed line-ups of concrete Buddhas at garden shops, and plastic or bronze Buddhas at new age gift shops. Looking online, over 16,000 Buddhas vied for my attention.

I had been hoping to find something … more unique, something that might reflect a modern and Western sensibility. Most of the Buddhas I found had a sameness to them, which for me, begged a couple of questions: What does (can, should) a Buddha look like, and why? What does equanimity look like? What does enlightenment look like? 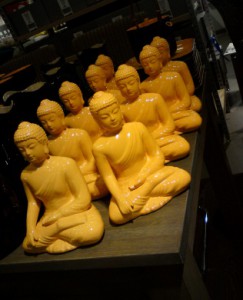 Originally the Buddha instructed his followers not to make representations of him.  When pressed by students he answered: “Statues aren’t needed.  You have the practice itself.  That is all you need.”

At the end of Buddha’s life, his disciples asked him, “How will we maintain our practice and attain insight when you are gone?”

He replied, “Shine the light inward.  Find your enlightened wisdom within yourself.”

For 300 years after that the Buddha was portrayed as empty space, under a tree or on a cushion, or as the wheel of dharma, which he began to turn. It was in Gandhara, India, (currently Afghanistan) around the third century, that Greek converts to Buddhism began to portray the Buddha as a Greek god.

This marked the beginning of much orthodoxy surrounding the portrayal of the Buddha over the next 2,200 years, and led to the creation of some of the most beautiful works of religious and spiritual art among all cultures. 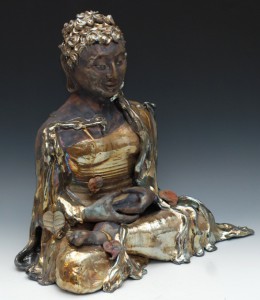 Buddha and bodhi tree are one. (Photo: Anita Feng)

Over the millennia images of Buddha have reflected the culture and people of their time and place. And this is just as it should be – iconic images reflecting the enlightened wisdom of one’s own fleeting world.

So now that Buddhism has taken root in the West, is it not a perfect opportunity to reflect our original enlightened nature accordingly? Just as we have begun to speak about the dharma in our own words and through our own experience, perhaps it’s time to explore how we might transcribe iconic sculptures into our own physical language.

In 1974 I began a 30-year career of making musical instruments out of clay, including ocarinas, drums and horns, two years before I started practicing Zen. My undergraduate and graduate degrees are in literature and creative writing, poetry having been my passion since childhood. 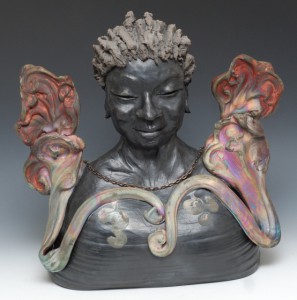 I mention these place-holders of a life only to illustrate how, when I began experimenting making clay Buddhas, all of these aspects of my experience entered into the activity. Through those many years of working with clay I have learned to allow the clay an equal partnership, permitting the clay to be as clay is, endlessly flexible, ordinary and extraordinary, just as the dharma, the vibrant truth of life, appears in our daily world.

And in addition, I’ve tried to cultivate the shimmering brevity of poetry, letting the natural metaphors of fire and earth resonate. I’ve developed a technique of working with clay that explores the fleeting nature of time and space, balanced in all the idiosyncrasies of the moment.

Some elements of each sculpture are meticulously formed while other elements (such as robes, clouds or body parts) are swiftly thrown, tossed or squeezed. This movement and vitality expresses the very essence of Zen. 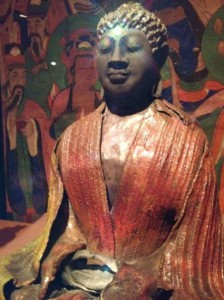 Furthermore, I use the raku firing technique to bring qualities of shimmering “thusness” to the surfaces, and to allow for the unpredictable yet very tangible artistry of fire. In imperfections such as cracks and other unintended results of the raku firings, I strive to honor these effects and ferret out the essential beauty behind the unexpected, by highlighting the perceived flaws with gold powder mixed with epoxy.

Now that I’m making Buddhas full-time I continue to explore these iconic images and consider how to reflect the essential image of peace and equanimity in our time and place. As such, it is my hope that my work offers a synthesis of East and West, past and present — the ancient inheritance of meditation practice revamped in the modern vernacular.

To give you an example of what I mean, I’ve recently been making sculptures of Bodhidharma (Daruma in Japanese). A near-mythological figure from the sixth century credited with being the first Zen ancestor, he’s depicted in art and literature as wild-eyed, bearded and fierce, the “wall-gazing” barbarian who cut off his own eyebrows to keep awake during meditation. 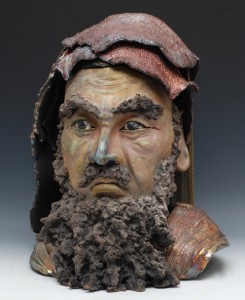 My path, as both a sculptor and Zen teacher, is to bring this iconic figure back into the realm of humanity. What brings us to a point where we finally have enough courage to sit on a meditation cushion and look squarely, unflinchingly, at what is? Usually there’s a mix of pain, fear, despair and frustration that accompanies us on our journey. We come as we are, and each of us, in our own karmic way, makes a sincere effort to awaken – as the Buddha originally instructed.

Nowadays I sell my Buddha-wares online, in galleries and at street fairs. I also open up my studio in Issaquah for home visits, and for occasional Buddha-making workshops. In addition, I’ve offered up my Buddhas to assist in sanghas’ fundraising efforts.

All of these marketing encounters are, in essence, a beautiful conversation that takes place before language. In my travels I’ve met other Buddhist artists that have opened up the possibilities for a more modern artistic expression of the Buddha-dharma. To mention a few in the Pacific Northwest, I would like to give a shout-out to Spring Street Bellworks, unique temple bells by Chuck Bonsteel; Christopher Moench, who sculpts contemporary one-of-a-kind prayer wheels; and Carole Leslie, painter, of Zen Dot Studio in British Columbia.

I am grateful to have this opportunity to introduce my clay Buddha practice to you, and invite your comments and questions. I can be reached by email at anita@blueheronzen.org, and if you would like to see a sampling of Buddhas, Kwan Yins and Bodhidharmas, please visit my etsy site at www.goldenwindraku.etsy.com. It is my hope that these sculptures will inspire peace and joy.

3
SHARES
Share
Posted Under: 2012, Dharma Healing, Arts, Summer
About the Author: Anita Feng
Anita Feng, JDPSN (Ji Do Poep Sa Nim) has practiced Zen in the lineage of Zen Master Seung Sahn since 1976. Since the ’90s she has studied under the guidance of Zen Master Ji Bong, receiving Inka, formal license to teach, in 2008. Feng works as a ceramic artist making raku Buddhas, and writes poetry, having just completed a book retelling the life of Buddha in contemporary terms. She lives with her family in Issaquah.