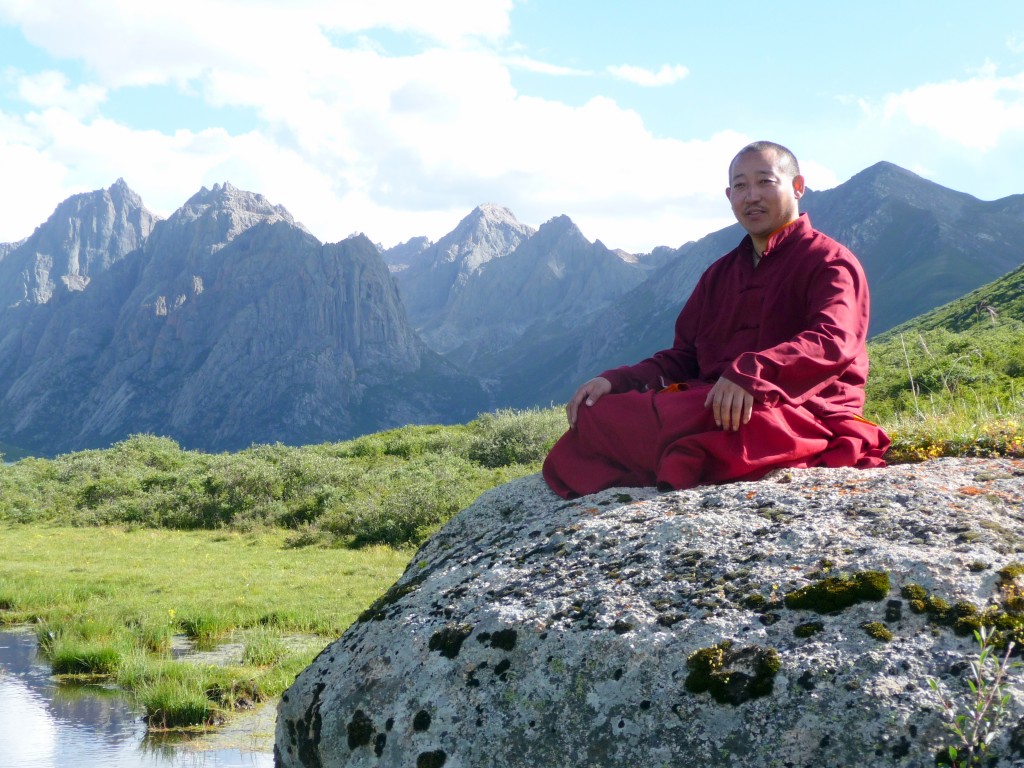 Lama Lakshey during his 2011 visit to Tibet.
Photos by: Edie Adams

Lama Lakshey Zangpo Rinpoche has for the last two years been increasingly active in the Spokane area, teaching and working to bring the benefits of the dharma to the region.

Rinpoche’s new dharma center in Spokane – Tsinta Mani Choling – Tsinta (“heart”) Mani (“jewel”) Choling (“dharma center”) is a sangha of his students and friends. He is a Tibetan Buddhist master and teacher of the Khatok Nyingma lineage.

Sponsored by Gaela Baker, Lama Lakshey first arrived in Spokane in August 2009. He soon found support from long-time practitioners Scott and Donna Davis, who offered their retreat land and opened their house in nearby Spangle, Wash., for regular teachings and meetings.

In June 2011, at Lama Lakshey’s invitation, the group was visited by His Holiness Kathok Getse Rinpoche, who led a nine-day Phowa retreat. His Holiness conducted the teachings, practices, and empowerment in a temple the sangha is building from traditional materials. While there Kathok Getse Rinpoche blessed the retreat land and enthroned Lama Lakshey as resident lama. 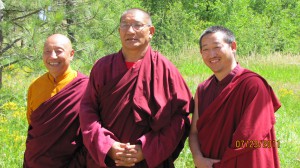 As the group got larger it moved to Spokane, and in early 2011 Kathok Getse Rinpoche returned from the Dalai Lama’s Kalachakra empowerment in Washington, D.C., to give a Kalachakra retreat in Spokane.

Tsinta Mani Choling continues to grow and has recently moved to its new center to 2902 N East Oval Ave., Spokane. Every Sunday before our regular teachings Lama Lakshey leads us in completing our preliminary practices of Ngondro.

We have submitted our application for 501(c) 3 tax-exempt non-profit status, and we are fundraising to support our center and two Tibetan students. Lama Lakshey’s childhood friend Chamtrul Rinpoche will be teaching this June, and the group looks forward to H.H. Kathok Getse Rinpoche’s annual visit this fall after Lama Lakshey returns from Tibet.

It is recorded that Lama Lakshey was a close disciple of Guru Rinpoche, the founder of Buddhism in Tibet. Over many reincarnations up to the present day, Lama Lakshey has been a renowned and remarkable figure in the tradition.

He first came to the United States in 2007, at the invitation of Kyabje Lingtrul Rinpoche, and was soon asked by H.H. Katok Getse Rinpoche, Anom Thubten, Lama Tharchin Rinpoche and others, to teach. 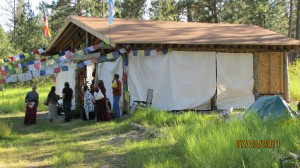 Students mingle in July, 2011, during the Kalachakra retreat on the Spangle retreat land, where members of Tsinta Mani Choling are building a temple.

Lama Lakshey also sought to develop financial support and educational opportunities for his Tibetan students. With supporter Jacob Archuletta he established the Joru Foundation, a non-profit that organizes and funds projects to give shelter, education and healthcare to poor and homeless children, and assistance for some elderly, in Tibet.

Lama Lakshey was recognized in this lifetime as the emanation of Tulku Padma Tashi.

At an early age, Lama Lakshey awoke to his previous lives and longed to become a monk, but his nomadic family needed him to tend to the animals at home. He easily learned to read and write by the age 6 from his father and an aunt. From his elder brother, Tulku Orgyen Jigme Dorje, he learned his tradition’s rituals, chants and music.

At 11 Lama Lakshey entered the local Khathok monastery Mardo Tashi Choling, where he studied for four years and completed the preliminary practices of ngondro, and received sutra and tantra teachings.

From 15 to 26, Lama Lakshey was enrolled at Larung Gar, one of the most advanced and largest institutions of Buddhist studies in the world. Under the abbot, his root guru Khenpo Jigme Phuntsok, he received many higher sutra, tantra, and Dzogpa Chenpo teachings and empowerments, and also went on pilgrimage and retreat. 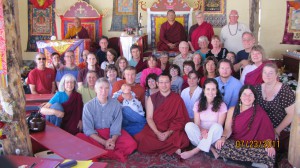 He was shown the actual face of his own awareness (rigpa) by Bontrul Tenpai Wangchuk, who became a very important teacher to him, and from whom Lama Lakshey received the lineage of secret teachings transmitted only to closest disciples by direct communication.

At 26 Lama Lakshey went on pilgrimage to many holy places in China and in Tibet, and accomplished retreat in the caves of Longchen Rabjam and Guru Rinpoche at Samye Chimpu and Gangri Tokar. He later went on pilgrimage to holy places in India, Nepal, and Thailand, where he received teachings from many great scholars and practitioners of traditions of Tibetan Buddhism, including teachings from the Dalai Lama.

At 29 Lama Lakshey became vice principal of the Sengdruk Taktse School in Golok, Tibet, which was established for orphaned and impoverished children. There he started the English program, and taught philosophy and computer science for five years.

Despite his renowned background, Lama Lakshey was not moved to hold a high title nor oversee monasteries. He aspired to benefit all people, especially poor Tibetan orphans.

His exposure to modern science and technology at Larung Gar, together with his travel and studies abroad, moved him to see the need for merging the traditional culture of his upbringing with the thinking of the modern world.

In contemplation and conversation with Khentrul Kunzang Gyaltsen and Tulku Thubten Norbu, it was decided the best way for Lama Lakshey to benefit the Tibetan people, especially students at the Sengdruk Taktse School, was to come to America.

Since Lama Lakshey’s arrival in the U.S., he has given many teachings, and acquired friends and students around the country. 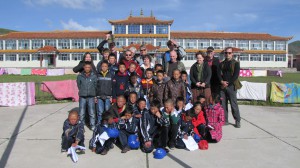 In the Northwest Lama Lakshey has students and friends in the Seattle and Portland areas. Since arriving in Spokane, in addition to giving regular teachings to a growing sangha, he has given teachings at the nearby Airway Heights Correctional Facility and at most of the colleges and universities in the area.

He also teaches in outlying towns in northern Washington, Idaho, and eastern Montana.

Lama Lakshey has been particularly active at Spokane Falls Community College, where he has given many presentations and where he has been an adjunct instructor for the past five quarters, teaching a course called “Meditation and Tibetan Culture and Language.”

In the spring of 2011, he won a grant to set up an international studies program in Tibet. Then in the summer of 2011, with a faculty colleague and several of his students from the Spokane and Bay areas, he traveled to Tibet visiting his family, Larung Gar Monastery, and the Sengdruk Taktse School. While at the school he arranged a sister-school relationship between Spokane Falls Community College and Sengdruk Taktse.

Through coordination between the schools, Tibetan students Jigme Dawa and Jigme Trodral were able to return to Spokane Falls Community College with Lama Lakshey, where they plan to study health science and computer science, respectively. After graduate school they will return to Tibet to teach and work in their community. Support can be offered through Joru Foundation.

From July 9 through Aug. 5 this summer, Lama Lakshey will offer a course, through the college, called the “Tibetan Cultural Excursion and Volunteer Service Program,” combining study, pilgrimage and study.