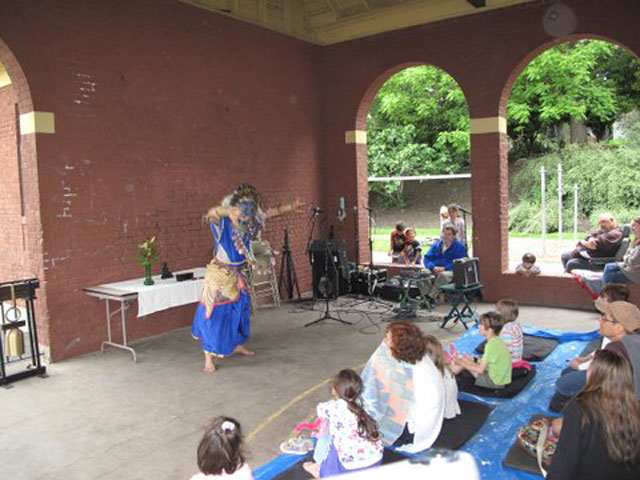 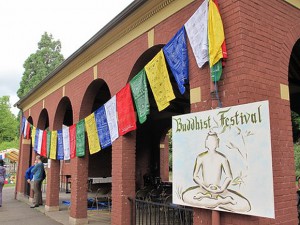 Themed “Transforming the Heart,” the festival included offerings for many interests including a panel discussion, a keynote address, and even a blessing-the-pets ceremony.

At center of the event was a covered pavilion protecting a cloth-covered altar that featured a statue of the Buddha and an incense burner. Large Tibetan prayer flags draped across the outside of the pavilion.

The festival included a children’s area, where young people could hear Buddhist stories, and where they could practice drumming. 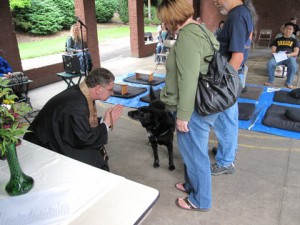 Rev. Gregory Gibbs of the Oregon Buddhist Temple blesses a dog by name.

Rev. Gregory Gibbs invited people to come forward one at a time to the altar, so each person could place ashes on their forehead, and bow to the Buddha statue.

Gibbs also offered to bless any animals people had with them. Gibbs asked for each animal’s name and then he addressed each animal by name, giving each a blessing first in Japanese, then in English.

“May you be healthy and happy. May no harm come to you. May you have peace,” he said.

Then Gibbs thanked each animal by name for coming forward. 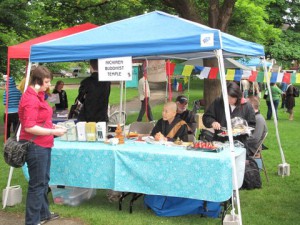 A visitor inspects literature from the Nichiren Buddhist Temple.

In her talk, she emphasized how the contents of people’s hearts creates their realities, concluding they must cultivate change in their hearts to change their lives. 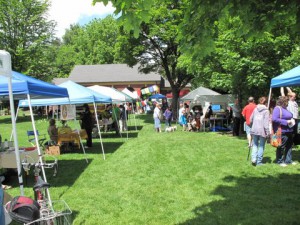 Many groups offered booths, with materials about their practices and their traditions. These included:

Video by Paul Harris
Paul Harris is a long-time semi-professional photographer who with his wife moved to Portland last June from Green Bay, Wis. Referring to the Portland Buddhist Festival, he said he “enjoyed meeting all the nice people at the event.” He currently has no Buddhist affiliations.

0
SHARES
Share
Posted Under: 2012, Compassionate Action, Summer
About the Author: Christopher Lee
Christopher Lee has pledged Buddhist vows in the Tibetan Buddhist tradition, worked as a reporter in radio and print for 10 years, and is the author of “Sacred Sites and Sacred Spaces,” published by Smashwords Publishers.